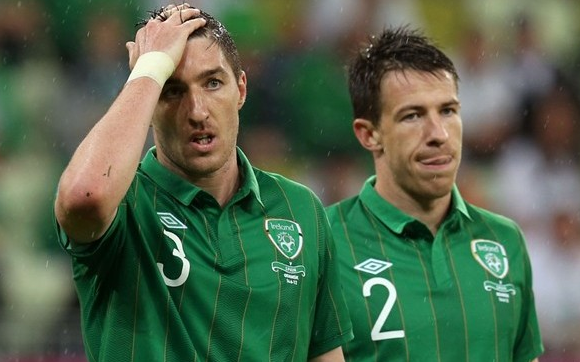 On the 18th June 2012 on a balmy evening in Poznan Cuneyt Cakir blows his whistle to end the Euro 2012 group C match between Italy and Ireland. Italy have won 2-0. This is Ireland’s final game at the championships. The record is played three, lost three, goals scored one, goals conceded nine. How did it come to this?

The cynics may say that Ireland were fortunate to end up in a somewhat soft qualifying group for these championships where Russia were the only realistic opponents for the top spot. When the quest for automatic qualification failed they were again blessed to draw Estonia in the play offs.

It could also be argued though that Ireland’s main rival for second spot in qualifying group B, Slovakia, performed very credibly at the last World Cup. They qualified for the knock stages in South Africa at the expense of the then reigning world champions Italy. Their campaign at the World Cup was ended at the second round, but it took the challenge of the eventual finalists, The Netherlands, to send the Slovakians home. In Marek Hamsik Slovakia also possess one of the most promising talents in European football and one of the driving forces of Napoli’s resurgence as a force in Italian football.

As for Estonia’s less than glamorous billing in the play off. It must not be forgotten that the Estonians out qualified Serbia and Slovenia to reach the play offs. A qualification campaign that included a highly credible 3-1 victory in Belgrade.

A lot of chickens came home to roost for Ireland at this tournament. The first factor being the fitness of John O’Shea and Shay Given. In the lead up to the opening game against Croatia there was considerable speculation as to the fitness of these two stalwarts of the Irish rearguard. A big decision needed to be made, it looks now the like the wrong one was made on both counts. This was a situation that needed to be managed. Such a situation that Giovanni Trapattoni is charged with managing. What resulted was Shay Given turning in three performances that could easily see him ranked as the worst keeper at the tournament. John O’Shea was well below par for the first two games and his ninety minutes against Italy are possibly his poorest performance in an Irish shirt.

Another factor is having our captain playing his club football in the MLS. His brief stint at Villa Park aside it is now clear that Robbie Keane’s usual sharpness is being blunted by playing against some defenders that would struggle to get into most Championship squads. Also it is difficult to understand how after seeing Keane train and play for four years that a manager could possibly think that he is suited to playing up front on his own, This tactic against Spain was always doomed to fail and in conjunction with employing Simon Cox as a third midfielder it was like sending in a middle weight in against a heavy weight boxer and then tying one of his hands behind his back. To continue the boxing analogy the Ireland Spain game was like watching a good friend receive an absolute pummelling in the ring and for someone to hide the towel.

The final factor is the system Ireland play and most importantly how the previous warnings as to this system’s limitations were ignored. It now seems clear that Ireland’s current system has a glass ceiling when it comes to achieving results. In certain circumstances or against certain teams it will produce the goods. However as the home qualifier against Russia in October 2010 demonstrated a good side can use a third man in centre midfield and pass Ireland off the field. In truth Russia gave Ireland a mauling that night in the Aviva and the 2-3 final score masks the gulf that existed between the two sides. Ireland were well beaten, lessons could have been learned, they weren’t. A brief flirtation with and extra man in midfield was attempted in the friendly against Uruguay when James McCarthy was played in the ‘No. 10’ slot. Trapattoni didn’t seem happy with how the experiment went and it wasn’t tried again. Not until the Spain game at the European Championships when Simon Cox battled manfully in what was a ‘square peg in a round hole’ solution.

So where to from here for Ireland? Well in practical terms it’s off to Belgrade for a friendly on the 15th August then in September the World Cup qualifying journey begins. After the ill-fated Euro 2012 campaign Trapattoni hinted that Ireland could switch to a 4-3-3 formation. 4-4-2 or 4-3-3 doesn’t really matter if the players aren’t encouraged to pass the ball and retain possession.

In the game against Italy in Poznan whenever Ireland lost possession they seemed to gradually retreat to twenty five yards from their own goal and attempt to set up the defensive line from there. The space between five yards outside the Italian penalty area to twenty five yards from the Irish goal line is almost immediately conceded. If Ireland did regain possession more often than not the ball finds its way to the full backs and they send it long into the Italian half in the hope for scraps from knock downs. This is what needs to change. The midfield area needs to stop being a ‘no mans land’ for Irish players with the ball at their feet.

One thought on “Where to from here for Ireland?”