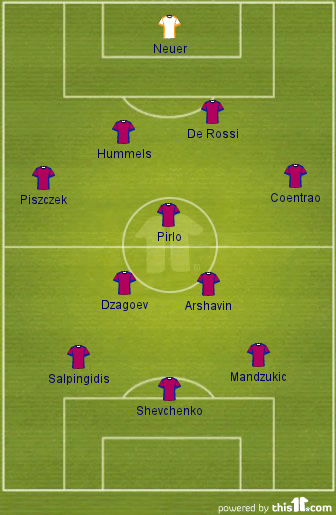 Prandelli is the mastermind behind the masterplan that neutered reigning World and European Champions Spain, on Group C’s opening day.

The former Fiorentina don made a brave decision to field three players at the back – employing, defensive midfield maverick, Daniele De Rossi as a retro-chic Italian sweeper. This system stifled Spain’s armada of artists and kept La Roja’s shots-on-goal tally to a minimum. De Rossi was also, crucially, able to initiate counter attacks, once his tough tackling and uncanny anticipation had disjointed the mesmerising rhythms of the Spaniards’ tiki-taka.

Prandelli should also be credited for the timely substitution of a frustrating Mario Balotelli. This switch led, directly, to a vital Toto Di Natale goal. On the striking front, the Azzurri manager made good use of two pre-prepared partnerships – both Cassano and Balotelli, and Giovinco and Di Natale – which had been worked on, intensely, in training for the Spain game.

Honourable mentions, in the managerial department, go to; Prandelli’s Sunday counterpart Vicente del Bosque, ski-hat-wearing Croatian Slaven Bilic and Ukrainian legend Oleg Blokhin. All of whom made an early impression on the tournament, but none of whom gave European football as much food-for-thought as Prandelli.

A traditional Northern European base-line goalkeeper, Neuer channeled Peter Schmeichel at times, in the Germany-Portugal fixture. The Schalke product, now of Bayern Munich, made a series of impressive spread-eagled blocks, including one which maintained his clean sheet in the latter stages of the game.

Providing competition for Neuer, Spain’s Iker Casillas made a couple of great reflex saves. However, due to his team’s ability to retain the ball in high areas, he had much less work to do than the German.

Croatia’s Stipe Pletikosa also made a number of saves and difficult takes, whilst contending with an Ireland side that were determined the loft a high volume set pieces and deep crosses into the area. Nevertheless Neuer’s performance in the face of the attacking threat of the likes of Cristiano Ronaldo wins him a place in this team.

This season Lukasz Piszczek flourished in Jurgen Klopp’s ultra-athletic Borussia Dortmund outfit. The speed merchant, a centre-forward converted into an attacking right-back, was able to find space in wide areas, troubling a compact Greek side, on Friday. Piszczek produced the majority of the service to star striker Robert Lewandowski , and, should he maintain his level of performance, Poland could see themselves qualifying from Group A.

Fellow Group A player, Theodor Gebre Selassie also performed well, in a similar attacking full-back role, for an otherwise disappointing Czech Republic side. Italian Christian Maggio’s talents were key to his countries innovative shape in the aforementioned 1-1 draw with Spain. Both narrowly miss out.

The number five’s relationship with fellow Bayern Munich youth product Holger Badstuber bodes well for the future of German football. It’s amazing to think that Hummels was allowed to leave Bayern at the age of 20.

Hummels’ spot in the ‘Team of the Tournament…so far’ was contested by the dominant Russian Sergey Ignashevich, as well as towering Dutchman Ron Vlaar – who provided an attacking threat from set pieces, against Denmark, whilst also having the best pass completion rate in his team. Ignashevich and Vlaar could be two players to watch as the tournament progresses.

De Rossi put in a strong performance, in a largely unfamiliar role for the Italians.

His inclusion is central defence was further evidence that the game is now dominated by central midfield players. De Rossi was one of ten recognised centre-mids on the field, at the start of the Spain-Italy fixture.

His aforementioned ability to read the game and turn negative situations into positive ones showed a maturity in a player now 28-years-old, who was, in years gone by, synonymous with ill-discipline and controversy.

Perhaps one of the more undervalued talents in European football, De Rossi’s role was decisive in Italy’s moral victory, this Sunday.

Fabio Coentrao picks up where he left off at the 2010 World Cup, where he made it into the team of the tournament.

The Real Madrid player was full of attacking intent and, comfortably, Portugal’s most impressive player.

Picking up where he left off at World Cup 2010, where he made the Team of the Tournament. Full of attacking intent and easily Portugal’s most impressive player, if Coentrao continues to perform at this level it ill be difficult to argue that he isn’t Europe’s top left-back.

Improving with age, 33-year-old Andrea Pirlo entered this competition off the back of an invincible season with Juventus. His ability to manipulate the physics of the ball is, arguably, unparalleled in world football. The weight of his passing and extent of his footballing intellect created an axis around which a tactically impressive Italian side turned. Pirlo’s vintage performance, in which he outplayed the strongest possible opposition in the Spanish midfield, may make him a good early bet for Player of the Tournament.

Pirlo’s fellow string-pullers Xavi , Luka Modric and Will Kvist also had strong showings in their respective opening games but the Italian schemer did more to engineer a favourable result for his team.

The North Ossetian’s youthful enthusiasm added an unpredictable dimension to the otherwise militaristic Russian ranks. Arguably the competition’s strongest starters, the men in red played with discipline and controlled possession, effortlessly, throughout.

Strongly linked with a summer move to Chelsea, Dzagoev fights off big name competition from the likes of Andres Iniesta and Wesley Sneijder to take this spot in the line-up. His passionate celebration of his second goal, will long be remembered as one of the images of the tournament.

I cannot forecast to you the actions of Russia. It is a riddle, wrapped in a mystery, inside an enigma; but perhaps there is a key. That key is Russian national interest.

After entering a game that looked like a lost cause for his country, at half time, super-sub Salpingidis scored, earned a penalty, had a further goal disallowed and achieved a 100% pass completion rate.

Direct running, from an inside-right position, completely changed the narrative of the game, and left Poland wishing that they’d tied things up in the the first 45.

The Wolfsburg striker formed a potent partnership with Everton’s Nikica Jelavic – with Mandzukic netting twice and Jelavic also scoring – as the Croats comfortably dispatched the Republic 3-1.

The tournament’s joint-top goalscorer, so far, Mandzukic holds off strong competition from Dane Michael Krohn-Dehli. The number 9 notched a priceless goal as his country toppled, this writer’s pre-tournament favourites, Holland.