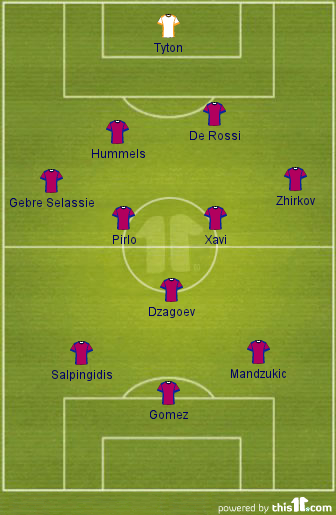 More than any other team, defending Champions Spain have shown tactical adaptability, so far in this tournament.

Starting their opening game with a strikerless formation, Spain were accused, in some sections of the media, of resembling an “art project”. Nevertheless, they achieved a satisfactory result against an impressive Italian side.

In the team’s second fixture, versus defensively-minded Ireland, Del Bosque deployed the mobile Fernando Torres as a central striker. Torres’ darting runs into the channels, and beyond the Irish backline, played a large part in helping Spain to a 4-0 win. Torres, himself, netted twice.

Taking Pep Guardiola’s Barcelona blueprint as his main influence, Del Bosque set up a team that made 788 complete passes, against the Republic. Arch playmaker Xavi contributed 6% of these successful balls. The use of David Silva in a pseudo-Messi role has also been noteworthy. Silva was unfortunate to miss out on a place in this ‘Team of the Tournament…so far’.

Del Bosque’s strategical range has allowed him to unseat Cesare Prandelli as the leading coach in the competition, although have Italy have continued to fascinate with their sweeper system. Poland coach Franciszek Smuda also deserves credit as the motivational force being the Poles’ spirited performances in their first two games..

Przemyslaw Tyton’s story has been one of the most romantic of the competition.

The PSV Eindhoven reserve goalkeeper has been, at best, his countries third choice, over the past couple of years. However, a shoulder injury ruled out rival Lukasz Fabianski, in the build up to the tournament, while a nervous Matchday 1 performance from Wojciech Szczesny created an opening for Tyton.

When Szczesny was dismissed for a foul on Greece’s Dimitris Salpingidis, Tyton was dramatically thrown into the action. With his first touch of the ball, he dramatically saved the resultant penalty and instantly became a folk hero.

In Poland’s second game, a highly-charged affair with Russia, Tyton once again acquitted himself well. The 25-year-old conceded only once, against a Russian team that had notched four in it’s previous game, consolidating his place in the Polish starting XI.

Elsewhere, Manuel Neuer once again impressed for a, seemingly, unstoppable German side. Stipe Pletikosa did much to help Croatia to earn a draw with Italy. The bravery of Vyacheslav Malafeev was another element that added to the memorable Poland-Russia game.

An athletic full-back with a penchant for overlapping runs to the byline, Theodor Gebre Selassie has been a class above his team-mates in a sub-par Czech side.

Gebre Selassie, incidentally the first black player to represent the Czech Republic, has been responsible for much of his country’s meaningful attacking play. He created a goal for Vaclav Pilar in the Greece game, whist also coming close to replicating Marco Van Basten’s 1988 anged volley in the opening game with Russia.

Despite the fact that the Czech Republic conceded a total of five goals in their first two fixtures, Gebre Selassie’s individual performances have been enough to edge out Poland’s Lukasz Piszczek, on this occasion. The towering German Jerome Boateng has also impressed, in the tournament so far, and deserves an honorable mention.

Looking beyond EURO 2012, it seems unlikely that Gebre Selassie will still be a Slovan Liberec player come the end of the summer. In this writer’s opinion, the 25-year-old’s talents would make him an ideal fit for many Premier League or Bundesliga teams. 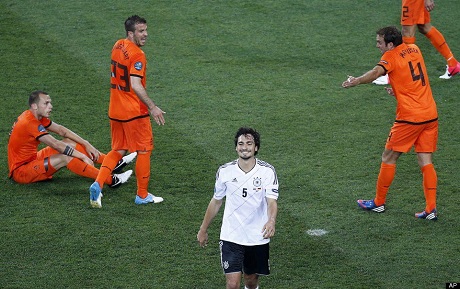 Settling further into his new sweeper role, with each passing minute of football, Daniele De Rossi has been one of the stand-out performers in a throwback Italian side. Manager Cesare Prandelli has assembled a team full of dichotomous, rough-around-the-edges characters, who also have the mental strength to execute a tactically complex system.

The rugged De Rossi, who has a slide tackle hazard symbol tattooed on his right calf, has exhibited uncanny levels of anticipation in the competition so far. Unfancied pre-tournament, Italy have neutered the creative attacking threat of both Spain and Croatia, leaving themselves unbeaten going into a final group game with, already eliminated, Ireland. Should Italy continue with the three-defender formation, De Rossi’s ability to set 70-yard offensive maneuvers into motion could be vital, as they seek the victory required for quarter final qualification.

Since leaving Chelsea for Anzhi Makachkala, Zhirkov has shown great mental strength to overcome the jeers of Russian fans with anti-Anzhi leanings. The 28-year-old looked extremely composed in the pressure cooker environment of the Poland game, and also engaged in an entertaining ding-dong battle with Theodor Gebre Selassie on Matchday 1.

Zhirkov’s main rival for the position in the ‘Team of the Tournament…so far’; Fabio Coentrao, although fantastic in Game 1, was less impressive as Portugal conceded twice against Denmark.

Elsewhere, Ivan Strinic was a stand-out player for Croatia, against Italy. Strinic, who rated the Italy performance as the best of his international career, will need to string together a run of similar outings to force his way into the reckoning for this team. His ability to exploit the gaps behind Spain’s attacking full-backs could be key to Croatia’s hopes of getting beyond the group stage.

Pirlo netted one of the goals of the tournament, to date, when he caressed a Zico-esque 25-yard free-kick beyond Croatia’s Stipe Pletikosa on Matchday 2.

Everything that Pirlo does with the ball is technically perfect and, as such, he has been one of the few players of the tournament who has been able to content with the, well-documented, passing ability of Spain’s midfielders.

Equal parts Italian Renaissance artist and Rolling Stone, Pirlo has, along with Mats Hummels, been a class above every other player in the tournament thus far. Back-to-back match performances have made the Juventus player an integral part of the Italian spine. High-profile players Buffon, De Rossi and Pirlo, will need to ensure that the Azzurri avoid complacency against Ireland, in order to guarantee a safe passage into the knockout phase.

Against Ireland, Xavi executed more successful passes than any player in a single game in European Championship history – 136. That statistic takes account of even players that had the benefit of 30 minutes of extra time.

Perhaps the greatest player of a generation, for Barcelona and Spain sides that could well go down as the greatest teams of all time, Xavi’s chemistry with Andres Iniesta continues to be an unfathomable riddle for opposition players. Despite the widespread exposure of the theoretical intricacies of tiki-taka, Spain have yet to become victims of their own success. They remain the bookmakers favourites to win a third consequetive major tournament.

Born in the troubled town of Beslan, best known for a 2004 hostage crisis, Dzagoev has an infectious, innocent love for the game of football. The youngster approaches the game with the eagerness of a schoolboy playing in a backstreet.

After scoring his third goal of the competition against Poland, Dzagoev carried huge momentum into Matchday 3. The young man that counts Frank Lampard as a hero, has , thus far, been able to replicate his idol’s knack of causing havok in opposition penalty areas, with perfectly-timed late runs.

Dzagoev’s box-to-box running has earned him a place in this team ahead of countryman Andrei Arshavin, who tired in the last 20 minutes of Game 2. Dzagoev’s energy levels could be enough to encourage Roman Abramovich to exploit his links with CSKA Moscow to secure the player’s signature, for Chelsea, this summer.

Salpingidis’ super-sub performance, on the opening day, stills stand as one of the most significant individual contributions to the tournament.

The low-profile PAOK player was, again, constantly busy for Greece, after earning a starting place for the second game. According to the Salpingidis’s agent, a number of Premier League sides; including West Ham, Stoke and Norwich; are beginning to express an interest in signing the player.

Greece’s ability to progress in the tournament may well be hamstrung by the overall quality of the team. One might expect a higher-profile player, such as David Silva, to fill this spot in the Team of the Tournament, once all is said and done.

On Matchday 2, Mandzukic maintained his spot as the joint top scorer in the competition by arriving, unmarked, at the back post to slot past a flailing Gianluigi Buffon.

A relative unknown, going into the tournament, Mandzukic has, nevertheless, been able to impose himself against two of Europe’s most organised teams. His two-pronged strike partnership with Nikica Jelavic, supported by Luka Modric and Ivan Strinic, has brought a dangerous variety to the Croatian attack.

Another player who has used Euro 2012 as an effective shop window, Mandzukic’s club Wolfsburg could have trouble holding onto him, after their 8th place finish in last season’s Bundesliga.

Andriy Shevchenko, drops out of the tournament’s best XI. Lightning failed to strike twice for the veteran, as France rained on the Ukraine’s parade.

The epitome of German efficiency, Gomez has held possession of the ball for a total of just 22 seconds, in this tournament, but has scored three times.

At 6’2” a natural target man, Gomez looks like he could be the natural successor to Miroslav Klose’s tournament goal-machine throne.

In Game 1, Gomez’s textbook downward header set the tone for a tournament of eye-catching headed goals. On Matchday 2, Gomez’s physical attributes tormented teenage Netherlands left-back Jetro Willems. The Bayern Munich forward deliberately positioned himself towards the right of the German attack, encouraging his team-mates to launched multiple balls into this area, an identifiable weakness in the Dutch ranks. This strategy directly led to Gomez’s second goal of the evening.

His first goal, on the other hand, came after a beautiful piece of swivelling finesse took Gomez away from the Oranj defence, perhaps betraying his Spanish ancestry.