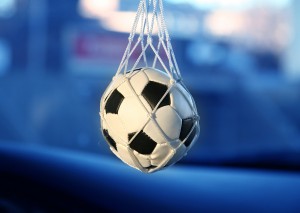 The UEFA Euro 2012 tournament is just around the corner, and England fans are going to brave the 1,500 mile journey to Poland and Ukraine to see their boys play against France, Sweden and Ukraine in the run up to the quarter-finals.

Some might be thinking of taking to the air and doing the Britain-Ukraine journey in a few hours, but the more adventurous among you will get in the car, stock up on supplies and road tunes and drive the whole way. My hat goes off to you for doing so, but bear in mind these tips when you’re on the road to make the journey to Euro 2012 the best that it can be.

This isn’t a trip to the shops and back. Depending on what route you’ll be taking, you’re going to pass through about half a dozen different countries before you reach Kiev. Charge up the Sat nav, install a bunch of GPS apps onto your phone, and keep a road atlas of Europe in your glove box. It’s bad enough getting lost just on a country road in the UK; but being stranded in the middle of nowhere on the outskirts of Berlin could be much more of a problem. Make sure you plan out your route in advance and figure out where you’ll be stopping at the end of each day so you can take your progress in stages. This means you won’t get stranded and you won’t miss Roy Hodgson’s men take on the French.

Driving through half a dozen countries means obeying half a dozen different sets of road laws. Make sure that you’re familiar with the rules of the road for each country, as falling foul of the police could mean a delay in getting to the match in time.

France in particular has a number of requirements for drivers that you should be aware of. You are legally obliged to carry a warning triangle and reflective vest in your car in case of a breakdown. Also, French law prohibits the use of any device that detects the location of speed cameras, so make sure if you have that feature on your sat nav or phone app that it’s disabled.

Get your papers in order

Many people forget to tell their car insurance company that they’re driving abroad, which sometimes lands them in hot water if they have a knock and then realise that they weren’t covered outside of the UK. Check with your insurer that you’re okay to drive in Europe (and double check, as Ukraine isn’t yet a part of the EU and so it might be excluded as part of Europe in terms of your insurance). If you’ve got some kind of breakdown cover, check to see if you can extend it to Europe during your road trip, just in case.

The only thing left for you to sort out is what tracks you want to fill the car stereo with. That’s probably the hardest part of the trip, and for that you’re on your own.

This guest post was written free of charge by Jamie Gibbs, the resident blogger for car insurance comparison site, Confused.com.

Jamie Gibbs is the resident blogger for insurance comparison site, Confused.com. As well as all things on two and four wheels, he has a passion for 'life hacking' - those little changes you can make that save you time and money.