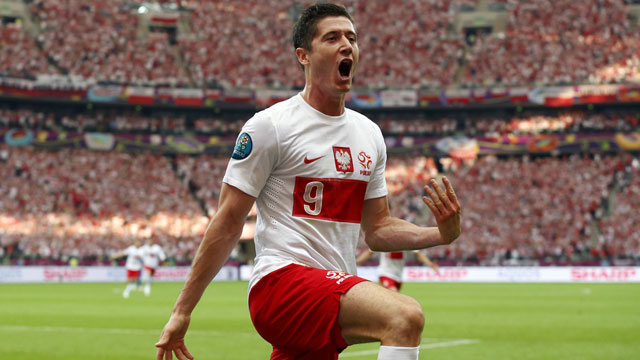 Russia will look to become the first side through to the quarter-finals of Euro 2012 tonight with a victory over co-hosts Poland. Dick Advocaat’s team have been the standout side in the first round of matches, easily outscoring and performing all other comers in their opening night defeat of the Czech Republic. Alan Dzagoev scored a brace in that 4-1 win in Wroclaw, delighting wily fantasy football managers continent wide and Andrey Arshavin, the one time Arsenal forward and reference point for lazy pundits, impressed too, much to the bemusement of commentators familiar only with the diminutive Russian’s disinterest and poor form in his latter days in London.

Poland started the competition in fine form, Borussia Dortmund striker and reported Manchester United target Robert Lewdanowski, heading in the first goal of the tournament against Greece. The adrenaline seemed to ware off somewhat as the game wore on, and a more experienced Greece, down to ten men, took a foothold in the game against Francisek Smuda’s co-hosts. Poland hadn’t played a competitive game since the Autumn of 2009 and it showed. Wojciech Szczesny’s sending off only added to the difficulty of the task but with Czech Republic still to play, there remains a great belief amongst the Polish public that a win and qualification is not beyond them.

Lukasz Piszczek is one of three Dortmund players that are so central to what Poland can create, the right back linking up with Jakub Blaszczykowski to provide the supply that Lewdanowski thrives upon. How Piszczek nullifies the threat of Arshavin on Russia’s left will be key and much will depend on whether Arshavin can peg Poland’s right sided defender back, to insert his influence on the game and minimise the Polish threat going forward.

Much of the talk in the build up to the game will revolve around star turn Dzagoev and whether or not Advocaat sticks or twist with the wasteful Alexandr Kerzhakov up front. Against a more resolute defence than that put up b the Czech’s in their opener, the Dutchman may opt for Roman Pavlychenko, fresh from a fine strike of his own. Konstatin Zyryanov did not put a foot wrong on Friday evening, pulling the strings in Russia’s midfield and you can expect to see him exerting a similar level of influence tonight.

It wouldn’t take much for Poland to offer a greater resistance than the feeble one offered by the Czech’s as Russia swept them aside with relative ease on matchday one. Expect Poland to take great heart from what Ukraine acheived against Sweden on Monday and with the crowd behind them, the hosts should be afforded more of a chance than most teams of their ability. Smuda’s side are limited though and are notably second best to Russia in most areas of the pitch. Russia know what they need to do and Advocaat will stress the importance of getting the job done before a final day meeting with a stubborn and astute Greek team. They will prevail. 1-2.

There’s a chat box on the right hand side of the page so feel free to leave your comments and messages there. We’re all over Twitter too, you can contact me via @downinthebox or the usual @bpfootball and the best tweets will be featured on the feed. Enjoy!