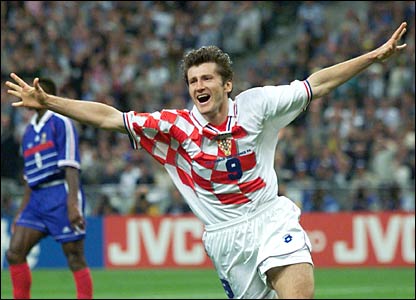 Giovanni Trapattoni leads his Irish side into Euro 2012 battle on Sunday night against a technically gifted Croatia side tipped as a potential dark horse of the tournament. Ireland has hardly set the world alight utilising an ultra-defensive approach during their qualifying campaign so what can Trapattoni do to overcome Slaven Bilic’s side in the Group C opener?

I put forward five ways to get the better of the Croats in the following blog but have decided to balance it up by also adding three golden moments from Croatia’s previous European Championship experiences. Sunday night’s encounter is sure to be a testing one for Giovanni Trapattoni and his squad yet there are reasons to be positive and Ireland hs every chance of gaining at lest a draw it they play to their full potential.

Croatia’s squad is full of some excellent individual players such as Modric and Krancjar and Slaven Bilic may well call upon some of  the golden moments listed further below as a means to  inspire his side ahead of their opening showdown with the Irish.

Tottenham Hotspur’s diminutive midfielder is the catalyst for Croatia’s offense and cannot be afforded time and space to link up with forwards Jelavic, Eduardo and Mandzukic. Simply put, Ireland’s two defensive midfielders Glenn Whelan and Keith Andrews must ensure Modric is closed down as soon as he crosses the halfway line otherwise the Irish back four is in for a testing evening.

Push up on the wingers

Stephen Ward and John O’Shea’s first instructions on Sunday night will be to keep a tight defensive line alongside Richard Dunne and Sean St. Ledger. Croatia will most likely start Ivan Rakitic and Darijo Srna as their wide players and both like to sit deep, tucked in alongside their central midfielders. Rakitic and Srna are capable of hurting Ireland if allowed space in the final third so sitting back is not an option for the Irish full backs. Ward and O’Shea will have to pressure Croatia’s wide players and help cut off the supply line to Croatia’s strikers.

Trapattoni’s comments following Ireland’s 0-0 draw with Hungary in Budapest suggested a tactical rethink of his favoured 4-4-2 formation to an even more defence-minded 4-5-1 setup might be on the cards. Changing the tactics – irrespective of how boring – and formation that helped Ireland qualify for the Euros so close to the actual tournament itself would be a mistake. If it ain’t broke, don’t fix it.

One of the flaws in this Croatia side is its inability to adequately deal with set pieces. Ireland is generally strong in this area with the aerial threat of Kevin Doyle, John O’Shea, Richard Dunne and Sean St. Ledger likely to cause the Croatians problems from corners and free-kicks. Let’s hope all the pre-tournament work done in Montecatini pays off should Ireland win any dead balls near the Croatian penalty area.

Croatia finished second in their qualifying group behind Israel despite finishing top scorers with 18 strikes and a +11 goal difference. Bilic’s side is setup to counter-attack and will happily maintain possession in their own half before biding their time and striking from deep. A repeat performance of the Aviva Stadium 0-0 draw back in August is required if Ireland is to avoid defeat.

The City Ground in Nottingham played host to Croatia’s first ever European Championship finals appearance since the break-up of the old Yugoslavia on June 9th 1996. Turkey were the opposition in the Group D encounter and dominated much of the game having been roared on by the majority of the 22, 406 fans in attendance. The game had 0-0 written all over it until the 86th minute when Goran Vlaovic nutmegged a Turkish player inside his own half, raced past a second player before rounding goalkeeper Recber and finishing from a tight angle. What a marvellous moment to announce your presence at football’s top table.

If Vlaovic’s winner against Turkey was historic for being Croatia’s first European Championship finals goal then Davor Suker’s effort against Denmark (in the same Euro 96’ group) will go down as one of the most iconic. Having converted a penalty and then setup Zvonimir Boban to make it 2-0 the Croatian striker put the exclamation point on a marvellous individual display by chipping Peter Schmeichel with the outside of his left boot to secure a quarter-final berth.

Beating the Germans at Euro 2008

Croatia gained revenge for their Euro 96’ quarter-final exit by defeating the Germans in a Group B encounter to cement their place in the last eight of Euro 2008. Darijo Srna directed a header beyond Jens Lehmann after 24 minutes before Ivica Olic netted a second and decisive effort in to cement a famous Croatia victory. Not even a late Podolski effort could prevent the Croats from a 2-1 win and safe passage to the knockout stages.

One thought on “Euro 2012: Five ways to beat and three golden moments from Croatia”