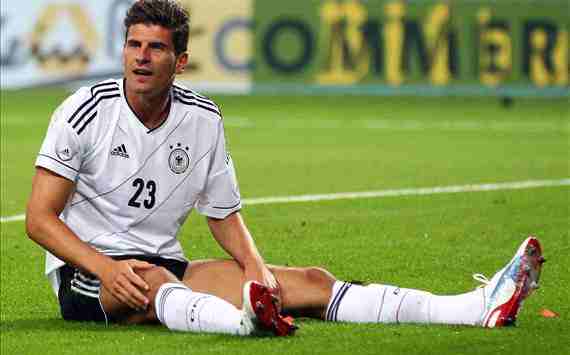 We’re only three days into this year’s Euro 2012 and we’ve already seen two giants of the international game stumble at the first attempt.

Netherlands fell victim to a firey, yet average Denmark side last night, while a below-par Germany were very lucky to emerge victorious with a 1-0 lead over Portugal.

Let’s start with Germany first, they may have started the tournament with a victory but last night’s performance is proof that this year’s hotly-tipped favourites for the Championship are already looking very shakey, especially at the back.

At the front, Germany seemed to panic when faced with a decent chance at goal, either by giving the ball away in scrappy fashion or by firing a massive belter well wide of the mark. Lukas Podolski had an average affair in midfield, while Thomas Muller also failed to garner much momentum for the majority of the match.

You have to think that Germany’s mediocre performance last night will just pave way to some of the tournament’s underdogs, Russia and France namely.

Netherlands, despite suffering an embarrassing 1-0 defeat to Denmark, look a bit more promising than their German counterpart, but these are still uncertain times for fans of the Oranje.

Holland dominated their tie with Denmark, who let’s be honest, are an average side at best. Regardless of their domination, the Dutch’s organization up front failed them on a grand scale and could potentially have cost them the tournament.

If you take a look at Holland’s group, they still have matches against Portugal and Germany to come. Both are sides that tend not to be very forgiving if you’re having a bad day at the office.

Holland’s attack will need to be improved hugely if they are to take anything from their next two opponents, especially Portugal, who last night proved they could very well win this group if they suddenly hit form.

So could Holland and Germany’s slow starts to their Euro 2012 campaigns result in a more open end to the group stage and even the tournament? Who knows, but one thing’s for certain, no team is a dead certain for the knockout stages. No sir.