There’s plenty of exciting young players on show in Poland & Ukraine,  so here’s 30 – from France’s Yann M’Vila to the Netherlands’ Luuk de Jong, Czech Republic’s Tomas Necid to Irishman James McClean. Tomorrow we’ll have the second half of the feature. 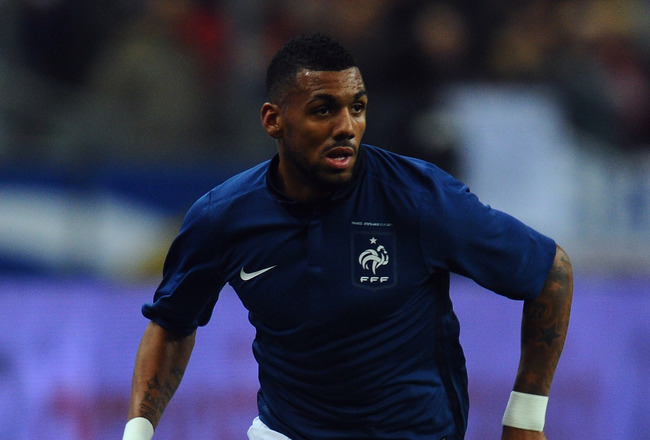 Burdened with comparisons to fellow Dane Michael Laudrup, a lot of attention and even expectation has been placed on Eriksen throughout his young career. Over the last twelve months however, the Ajax midfielder has crept closer to the quality of the former Real Madrid, Barcelona and Juventus playmaker.

At just 18 years of age, Eriksen was called up to the squad for 2010’s World Cup where he was the youngest player at the tournament. He played twice and although his potential was obvious, his inexperience was also plain to see. In qualification Eriksen began to release some of his unbridled quality, scoring once and creating four goals, while also putting the England midfield to shame in a friendly. Although Denmark lost 2-1 that day, Eriksen was undoubtedly the best player on the field.

Now 20, Eriksen is part of a solid but albeit unspectacular Danish side. He will be relied upon to establish much of the creativity in an attacking midfield position with only Nicklas Bendtner for company.

In a group that includes Portugal, Germany and Holland, expectations are pretty bleak for Denmark – but don’t be surprised if Eriksen sheds some light on Denmark’s daunting campaign

There were a few hearts in mouths amongst France fans last week when Yann M’Vila went down in a friendly against Serbia after taking a knock to knee. Thankfully, the Rennes midfielder has been given the all clear and will be available for the tournament.

A transfer window hasn’t passed in the last twenty-four months without someone linking the 21-year-old with a move elsewhere, most regularly to Arsenal. The rumour mill is already in full flow with regards M’Vila who is apparently again being targeted by Arsene Wenger.

The tough tackling, physically imposing defensive midfielder has broken into the French team at a young age. He’s already played 19 times for the national side, which – when you consider the competition in Alou Diarra, Lassana Diarra, Mathieu Valbuena and Abou Diaby – is very impressive.

Clearly favoured under Laurent Blanc, M’Vila will be an important cog to France this summer and for the next decade or so. Although France and defensive midfielders go hand-in-hand, not since Claude Makelele has France had a player capable of fulfilling the role and making it his own. Step up Yann M’Vila.

A member of this remarkable generation of German players expected to rule international football for years to come, Gotze’s talent and potential is undoubted. Already well-established domestically, with two Bundesliga titles and most recently a DFB-Pokal to his name, Gotze played four times during qualifying and scored a goal.

With the strength in depth in this German side, chances for Gotze have understandably been limited but at the tender age of 20 his time will come. Gotze has incredible technique, is typically efficient on the ball and has great tenacity and flair. The Borussia Dortmund attacker has more than enough to make an impact from off the bench. If Germany goes far in the tournament, as they are expected, Gotze will certainly catch the eye.

The Russian attacker is another player who is well established domestically with plenty of medals on the mantelpiece, but waiting for his time to shine at an international championship.

The 21-year-old has had a meteoric rise in football. Having started off in division two side Krylia-Sovetov-SOK he was noticed by Russian football giants CSKA Moscow, where he made an immediate impact – playing 29 games in his first season at just 18-years-of-age. From there, he’s been a beacon of talent and consistency having already gazumped 100 league appearances and notching 37 goals in all competitions.

Dzagoev is a classic number ten, playing in an advanced role behind the striker where he utilizes his excellent playmaking ability. For Russia this summer, he may be seen out wide in an attacking trident alongside Andrey Arshavin and Roman Pavlyuchenko. Where Arshavin dazzled in 2008 in Austria/Switzerland, Dzagoev will be handed the opportunity to do the same this year in a relatively easy group on paper. Russia should go far this summer and Dzagoev will shine.

At 23, the Polish striker is one of the older players that will be appearing on this list. Although Lewandowksi is well established both for club and country, this is his first opportunity to show what he has to offer on a competitive stage. All but two of his goals have been in friendlies, where he has been prolific – scoring four in nine.

Poland have had to settle for friendlies against the likes of Belarus and Andorra to prepare, hardly adequate, but Lewandowski has had the benefit of being a part of the very successful Borussia Dortmund side that has just defended its Bundesliga title and added a DFB-Pokal a few weeks ago.

Lewandowski will be starting up front for Poland. On home turf, expectations will be massive but in a group that includes Greece and Czech Republic, qualification is very much achievable. The Polish side will be expected to push forward whenever possible and it would be shocking if Lewandowski doesn’t find the net this summer. With 30 goals for Dortmund last season, he might be worth a small flutter for top scorer. 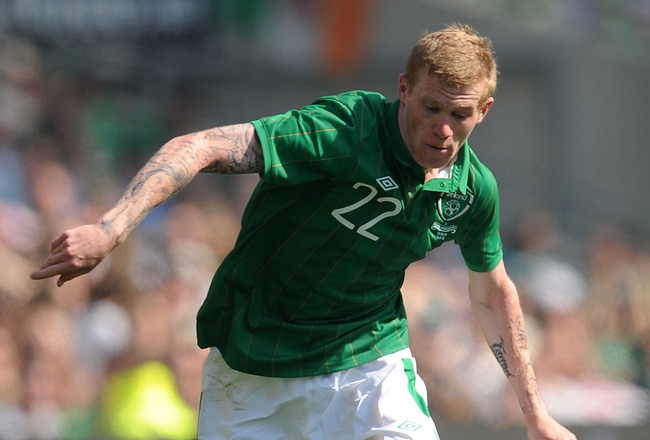 Little more can be said about the Derry man, who stormed onto the scene at Sunderland last season after moving over from the League of Ireland.

A tough, athletic winger with exceptional crossing ability and an incredible engine to boot, it really is only a matter of time before McClean is an every-game starter for the Irish side. Unfortunately, the Euros have come a little bit too soon for the 23-year-old with Aiden McGeady to contend with down the left.

McClean should get his minutes though, expect him make the most of them.

Oxlade-Chamberlain is another player who will have to sit tight and wait for his time to come. The Arsenal man showed glimpses of great potential last season and probably abated any fears that he was going to be Theo Walcott MkII. ‘The Ox’ has more than one comparisons to his mercurial team-mate, having come through the ranks at Southampton before making a big money move to Arsene Wenger’s side and then being selected for a national team perhaps a little bit prematurely.

Chamberlain is similar in style to McClean; a powerful and tough runner, but with a deft touch to take him past any defender. His chances will certainly be limited, but the 18-year-old is explosive off the bench should he be called upon.

There isn’t much to talk about on this Ukrainian side, which co-hosts the tournament along with Poland. Particularly when two of your striking options are the infamous Andriy Voronin and the once-great Andriy Shevchenko.

But then there’s Yaroslav Rakitskiy. The Shakhtar Donetsk man is comfortable in defence and midfield and also has an eye for goal. Physically imposing, tough tackling and in his two years at Ukraine’s top club has already won back-to-back league titles.

Most of the attention will be on Spain’s plethora of attacking players, but there’s a left back who is attracting the interests of Barcelona – the same club that released him from their youth ranks in 2005. Jordi Alba turned to Valencia, where he’s played over 70 games after a year on loan at Gimnastic.

Alba may only have played five games for Spain – and only one in qualifying – but after a terrific season at Valencia he was a certainty to be included in the Euro 2012 squad. Alba caught the eye first against Scotland in qualifying and also against Venezuela earlier this year in a friendly.

Alba is comfortable both defensively and in a more advanced position which understandably has him connected with a spot in the Barcelona team. Valencia will be looking to hold onto the 23-year-old, but Jordi certainly won’t say no to a return to his local side.

The prolific Dutch striker would be a starter for most of the teams on show this summer. Unfortunately he’s in a squad that includes Klaas-Jan Huntelaar and Robin van Persie…

De Jong (not to be mistaken with Nigel) has only played seven times for Holland, but has been incredible in the Eredivisie for the past two seasons. He’s scored 52 goals, a statistic that can be dangerous when it comes to the Dutch league, but de Jong is tremendously agile  with a giant frame that will trouble even the best of defenders. His goalscoring ability his unquestioned, expect de Jong to be one of Holland’s impact players from the bench.

Not much is expected from the Portuguese striker just yet, but Oliveira could be the answer Portugal have been looking for when it comes to having a striker capable of playing foil to Cristiano Ronaldo. The ultimate ‘one man team’, Portugal have struggled for goals from elsewhere. Helder Postiga and Hugo Almeida have pitched in but they only scored seven between them in qualifying, the same as Ronaldo.

Oliveira is a physically imposing striker, and at 20 with just 45 appearances under his belt it might be a bit too soon before Oliveira begins to make an impact.

Czech Republic and CSKA Moscow striker Tomas Necid is another tall forward with an eye for goal. At 6″3′, few come more physically imposing than Necid. Although Milan Baros is still very much the main man when it comes to leading the line in a Czech Republic shirt, it’s just a matter of time before Necid – who has scored seven in 25 appearances for the Czechs – gets his opportunity. 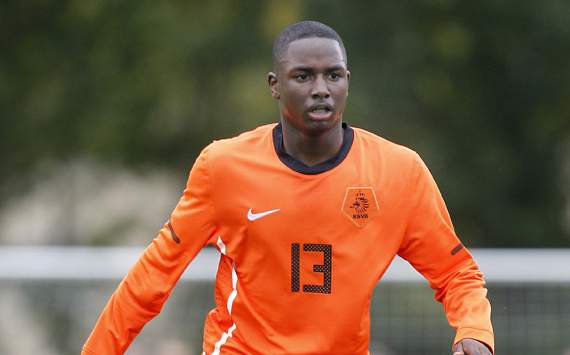 Who?! Jetro Willems is a bullish left back that has charged his way into the Euro 2012 squad due to injuries to Erik Pieters and Wilfred Bouma. Although he may not start, Willems has a very bright future and will hopefully last longer in the national setup than another similar full back, Roysten Drenthe.

Jetro is the youngest player at the championships, a few months younger than England’s Alex Oxlade-Chamberlain. He may only have two international caps, but Bert van Marwijk may not have any other choice than to add to that.

Greece’s exciting attacker Sotiris Ninis is limited by his own team. Greece don’t do offensive excitement, it’s defensive reliability and quality on set-pieces. Ninis, however, is as tricky as the come with pace to burn and would be an instant starter if he wasn’t unreliable when without the ball.

Ninis had a brief cameo at the World Cup in South Africa, making two substitute appearances, unfortunately a similar sort of impact is expected again from the Panathinaikos winger who’ll be plying his trade in Italy with Parma next season.

Chosen ahead of the inconsistent Yoann Gourcuff, Marvin Martin has been handed a huge opportunity to boost his profile this summer. The attacking midfielder has exceptional vision and technique on the ball, with the ability to pick a precision pass to break down even the thickest of defences.

Martin has been a mainstay at club level for Sochaux for four seasons, scoring eleven goals but with 30 assists tagged onto that. Laurent Blanc is showing a lot of faith in the 24-year-old, who compared to some whom we’ve profiled today is a wily old veteran. But with his playmaking abilities in one of the teams favoured to go along way, Martin should turn heads.