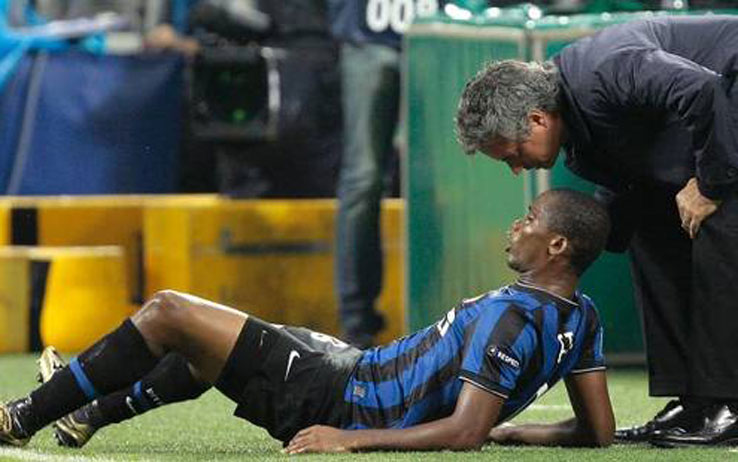 As far as second-choices go, José Mourinho could do a lot worse than Samuel Eto’o.

Of course, the Portuguese’s pursuit of Wayne Rooney is likely to go to the final week of the transfer window and Mourinho has made no secret of the fact that it is Rooney or bust as far as his transfer pursuits go.

Admittedly, too, Eto’o is 32 years of age, would command the majority of the £325,000 wage he receives at Anzhi and has scored just 36 goals in 71 games at a, seemingly, weaker level.

Given Mourinho’s refreshing commitment to Chelsea’s young squad and Financial Fair Play, it would seem a somewhat peculiar move.

Sure, Mourinho is only likely to oversee a three or four-year project at Chelsea and has form when it comes to a scorched earth policy – that is, one where his successor struggles with the exhausted veterans he has left him – but it seems Eto’o and this Chelsea would not be a perfect match.

However, that overlooks one crucial facet: Eto’o’s previous with Mourinho.

After all, this is the man who rejected the sizable riches of Manchester City after Mourinho made a personal phone call to the Cameroonian to come to Internazionale in 2009.

Also, in the summer of 2006, Mourinho placed Eto’o ahead of David Villa and Andriy Shevchenko on his summer wishlist for a new striker.

Eto’o was intrigued, but Barcelona’s asking price of €50 million, ultimately, proved too much and Shevchenko arrived. The rest, of course, was history.

Thus, when Eto’o became available in 2009, Mourinho made a point of recruiting him despite the fact that he would lose his talisman, Zlatan Ibrahimović, in the process and even though Diego Milito had just been signed from Genoa.

Mourinho saw something in Eto’o, who Pep Guardiola was willing to discard despite the Cameroonian being such a crucial part of Barcelona’s landmark success in 2009 with his 36 goals in 52 games.

There was a renewed passion and selflessness to Eto’o compared to Mourinho’s original pursuit in 2006.

After all, this was the man who, in 2007, refused to come on as a substitute for Barcelona – leading to Ronaldinho, of all people, to question Eto’o’s commitment.

Eto’o, clearly, did not feel wanted but following the pre-season of 2008, Guardiola laid the foundations for a new Eto’o: determined, committed and composed.

Mourinho continued this process at Inter and far from building the team around an individual – as it had been with Ibrahimović in 2008/2009 – Eto’o was part of a collective group where the centre back and goalkeeper were just as valued as the creative midfielder and striker for, arguably, the first time in the Cameroonian’s career.

Thus, trying to select one individual who contributed more to that incredible season for Inter is incredibly difficult and that is testament to Mourinho.

That is why Eto’o has gone public and is so eager to move to Chelsea.

It is an opportunity to not only play in a new league and win a title or Champions League again but, also, to play under Mourinho:

I have played under a lot of great coaches – but there is no other character like José. I would like to have the chance to play under him again because it is never boring when José is around. Chelsea are a great team.

However, eight years ago, the respect was not so forthcoming.

Eto’o called Mourinho “shameless” and said he would retire if Chelsea won the Champions League after the vitriol-filled second-round tie between Barcelona and Chelsea, which led to referee Anders Frisk’s retirement after the first-leg and a controversial winner by John Terry in the second-leg.

Then, of course, Mourinho and his backroom staff clashed with Rijkaard, Eto’o and Ronaldinho in the tunnel following that second-leg.

Eto’o even claimed that a Chelsea steward made a racist slur. Such was the chaos, the, seemingly, meek André Villas-Boas spat his chewing gum at Barcelona’s assistant manager, Henk ten Cate.

It seemed Mourinho’s and Eto’o’s ideology and paths would never overlap yet, such is football, they did and Eto’o may yet work with Mourinho again.

Where he would fit in is intriguing, as partly why Eto’o’s scoring record at Anzhi is not as bamboozling as some may expect – as the supposed focal point of the team – is because he has played in a free-roaming, deep-lying role.

Given how Eto’o proved himself as a winger under Mourinho at Inter, this is far from a mere poacher.

However, with Chelsea having four incredible talents for the three deep-lying positions – with Oscar, Juan Mata, Eden Hazard and André Schürrle – it would seem that Eto’o would compete with Romelu Lukaku and Fernando Torres for the central striking berth.

Where this leaves Demba Ba remains to be seen but if there is to prove one exception to Mourinho’s newfound policy of signing players under the age of 27, it is Samuel Eto’o.