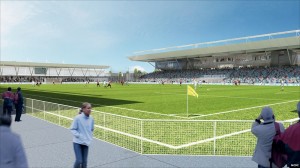 A 7,000 seater stadium, 17 pitches, a state of the art rehab centre and 80 acres of land catering for over 400 youngsters on the cusp of excellence. These are the plans for the £100 million reinvention of Openshaw in East Manchester. The ‘Etihad Campus’ has been designed and approved as a major development in the north west community and as a key cog in the machine that is Manchester City’s quest for global dominance. The project to rival Barcelona’s famed La Masia training facility is due to begin in 2012.

The benefits for the local community and surrounding area will no doubt be countless but as always there is also a more business-like agenda. Manchester City Chief Football Operations Officer Brian Marwood has championed his belief in the “significant regenerative and economic benfits” the area will enjoy as a result. This can certainly be justified with the creation of approximately 250 jobs whilst also creating a campus aiming to school and board 40 of the footballing ‘pupils’.  In addition to this, the club promises to set 5.5 acres aside for community projects and usage, including a sixth form college and investment in a swimming pool, a move which is heavily endorsed by the Manchester City Council. Also, further community projects are proposed such as the planting of hundreds of trees in the vicinity of the site.  This will give the area a much needed aesthetic boost and turn what was once a very run down and derelict part of the country into somewhere much greener.

The project is believed to take approximately five years to complete and Marwood has lauded it as ‘the most important investment the club has ever made.’  The academy will create a platform for the stars of tomorrow to hone their talents and develop their ability in the best possible environment. As previously mentioned, Barcelona have already reaped the rewards of such a facility producing the next generation of Xavis and Iniestas. The campus plans are staggering and could well provide the club with a lasting legacy of success.

The controversial sponsorship deal with Etihad regarding the naming rights of the stadium and future projects has drawn heavy criticism from all quarters in the game as it is seen as no more than a bypass to the UEFA financial fair play regulations. By raking in £400 million over the 10 year deal period, the books at City suddenly appear more balanced in comparison with the massive outlay on wages and transfer fees. Surely though, by establishing such a startling academy, the need for wholesale reinvestment in the squad season upon season will be a thing of the past…..you would think.  Marwood supports this notion, “Everyone has seen we have accelerated the recruitment process in terms of where the first team is now, which is three years into the owner’s tenure of this football club. We are fully aware of the commitment that we face but, equally, we talk about sustainability and that [paying large transfer fees] can’t be sustained, so we have to develop within. That is something that is paramount to the future of the club. Financial fair play gets talked about every week now, and everyone is looking to Manchester City to see whether we are going to conform to that. This is an element that will help us achieve the criteria people are looking at.”

It does however bring to the boil the sponsorship debate once again. The validity of such a high value naming rights deal has been discussed by pretty much everyone in the game.  The valuation is unrivalled and unheard of in football.  For comparison, Arsenal signed a 15 year deal in 2004 with Emirates for £100 million. Whilst there has been a further influx of money in the game since then, this does not seem proportianate. The Etihad Campus allows Manchester City to portray that Etihad have not only paid for their name to be given to the stadium, but also to the campus and as such, the wider community. With FIFA promising to scrutinise every aspect of the deal, this may just give the club a little more justification towards the hefty price tag.

So it all seems to make sense. Community benefits, business benefits, beneficial in terms of conforming to financial fair play regulations; all the boxes are being ticked. Another area where it makes sense for the club is in restricting other teams to develop their own players. Although cynical, it is more than feasable that Manchester City could recruit the best young talent in the country, all wanting to be a part of this exciting and state of the art development system. Those who don’t quite make the ‘world-class’ grade could be sold on, turning a healthy profit in the process and contributing towards a more positive balance sheet. The millions received will be added to the accounts and help to portray an image of a self sustainable club operating within the guidelines of the fair play model. This would obviously serve the purpose of shackling other clubs and restricting their own youth development initiatives.

Cynicism aside, this is an extremely positive development, comprising a state of the art facility, regeneration of a run down community and the creation of crucial employment opportunities. Indeed, 70% of the construction contracts will be outsourced to locals. The Etihad Academy will be a real shot in the arm for Openshaw. For a club that has been heavily criticised for ruining the game and alienating fans with ludicrous sums of money being banded about, this is one investment which is sure to herald a sound return in terms of community development and academy production. In this instance the club must be applauded for a truly breathtaking project with far-reaching benefits for a wide range of the population, from the England team to the local residents of East Manchester.

A graduate from Sheffield Hallam University after studying social and cultural studies in sport, I have always held a strong interest in all things football. I have produced articles for my local newspaper and also for different websites on various topics from lower league match reports to in-depth analysis of the state of the game within wider society. I am an aspiring sports journalist currently on the hunt for a permanent position.