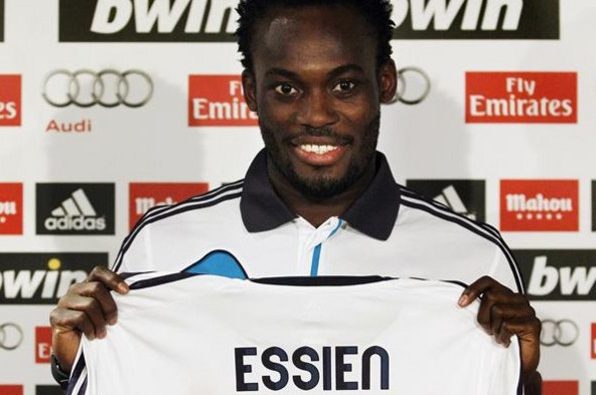 It’s not very often that you hear a player of Michael Essien’s stature is surplus to any manager’s requirements. Essien, throughout his illustrious career, has always been an entrenched fixture in any manager’s agenda. He has been injured countless times, but he has always slotted back in with ease after recovery, each and every time. Even with the numerous managerial changes he has been through with  both club and country, he still has always been favoired. That has been Essien’s story. That is the degree of his rich quality. The Bison has almost always been an A-list, first-on-the-team-sheet baller.

But all that changed in recent months. In fact, it started changing a while back – after his latest spell on the sidelines due to a recurring knee injury. Essien, the fighter that he is, strived for months to get fit, and get welcomed back to Chelsea’s starting XI with open arms. When he did recover, he found out that new manager Andre Villas Boas wasn’t exactly as welcoming as his former gaffers. Essien was  not only made to fight harder to regain his spot, he was also not given encouraging signals as well; he was not getting enough opportunities to ‘reprove’ himself and regain full fitness and form. Steadily, Essien unconsciously became a usual face on the Chelsea bench, waiting for opportunities that never came, even when he was clearly needed.

The trend remained continuous after Villas Boas was sacked – rather worringly, as everyone else thought new manager Roberto Di Matteo would genuinely give him a chance to get back into the team. Many observed that Villas Boas had tried to strategically ease out Chelsea’s ‘old guard’ (Michael Essien being one), and so him leaving would leave things to return back to normal.

RDM followed suit. He also stuck to utilizing the hitherto out of favour John Mikel Obi. Mikel, who had been virtually non-existent in recent years kept on starting ahead of the bison. Game after game, Mikel grew in confidence and strength, as Essien was left to rust on the bench. Before he knew it , he, as a friend joked on twitter, ”had a seatbelt on the Chelsea bench”. It was all becoming clear. He was no longer Essien, the strong character with immense presence that marshalled the Chelsea midfield with drive and tenacity for years. He was now a bench warmer, a mere squad player.

Like Drogba, Essien had won all there is to win at club level, and lacked the motivation substantial enough to keep on playing at the Bridge. He had given his all for the club. His business there was more or less finished. Any more contribution was just going to be a bonus. He had completed a era at Chelsea. A trophy laden, super stardom era. An era spanning 7 years, amidst a host of personal accolades. An era where he proved to be one of the best players in Africa, and the world at large. n era that made Michael Essien thee Michael Essien.

But his ordeal should not be mistaken for that of  the usual decline that footballers of his calibre undergo at some stage. He has not lost his strength, his presence and his power. He is still impressively versatile. He has not been a player who plays, but messes up. He has been the player who does not even get the opportunity to play. The player who’s hunger to reinvent himself is being suppressed by his manager’s refusal to play him. He still has a lot to give. The kind of pure quality he possesses does not diminish that easily.

Many suggested that he move on from Chelsea. Well, at the very last minute of transfer deadline day, he did. He moved to Real Madrid, reuniting with Mourinho.

He moves to the Bernabeu with high hopes, of regaining top form and being part of an already star studded side. Essien will not, realistically, be a starter at Real. But he will be a relevant component of a side that will be competing fiercely on all fronts, and will need all the help they can get. Essien will probably win a trophy or two with Madrid. He might have a decent season.

But it’s a loan deal. It will end, and when it does, he’ll be 30, years older than Madrid’s already established midfielders, and probably not in the position to challenge for a place. And returning to Chelsea will clearly not be advisable. He will face an important decision point.

The prominent suggestion has been that he join the increasing army of African players in the middle east, who are there to play out the last years of their career for some insane weekly paychecks. That is a highly tempting suggestion.

In, say, China, he’ll get all the playing time he wishes, and all the money he wants. It’s a win-win situation out there.

Post Real Madrid for Essien will surely be at a pivotal point in his career. He will face the unbearable dilemma of choosing a wise next career move. He can decide to stay on at Real, and fight for a place that might never be his, or move across to another European club. But would he? or, better still, should he? Seeing as he has all the medals there is to have at club level. Ideally, it will be time for him to cash in on a middle east switch and preserve his financial future.

Tax laws there too are favourable, not as harsh as in the UK. The propensity to save would be higher. He is yet to marry, to have a family. For someone like him, in his type if situation, it would be natural for him to make a decision motivated by financial reasons. It, in all fairness, seems like a wise thing to do. And he still has the value and reputation to command a lucrative contract.

Also very important to note that it would have it’s merits in a footballing sense. Whilst at it, he could use his playing time to get him constantly sharp for the Black Stars, where he is needed, and revered. There is not much to lose that way

Essien still very much has unfinished business there. He missed the last World Cup, and Afcon too. After taking an indefinite break from the team to ‘concentrate on playing for his club ‘ following successive career threatening injuries whilst playing for Ghana, he has been sorely missed by most Ghanaian football fans. He, according to the Ghana FA, is the vice captain of the nation, and with substantive skipper John Mensah almost always out with injuries, he is virtually the leader now.

He is held in high esteem in Ghana. Maybe it will be time to come back, and reverse the situation, by concentrating more on his country than his club. Maybe it will be time for Essien to direct his efforts at winning something with Ghana, after seeing and conquering all in club football. Essien has always given more than a 100% for Ghana. Despite his controversial break, deep down, Ghanaians love him. And he loves his country too. There’s a chance for him to write a new chapter. Not too late.

Who knows, he might probably end up winning a major trophy with Ghana. Ghana has been famously trophyless for three decades now. Opportunity beckons in South Africa 2013, should they qualify. Essien could be part of a historic moment for Ghana. There’s a chance to achieve something big and exciting.The possibilities are as they say in Ghana these days, ”tasty”.

No one knows what Essien is thinking. He is generally very reserved. He gives very little away. He is unpredictable. There’s just one thing too. Essien might choose to stay at Real, because for a known fighter like him, leaving the club with an ”out of favour” tag is something that he will not be comfortable with. Essien is competitive, he likes winning. He wouldn’t want to leave, and send inevitable signals of ‘quitting’. He would want to fight on.

Whatever he does, whatever decision he takes, wherever he decides to go; we all hope Essien’s next move will be beneficial for him, his family, and his country.

2 thoughts on “Essien: Madrid now, where after?”