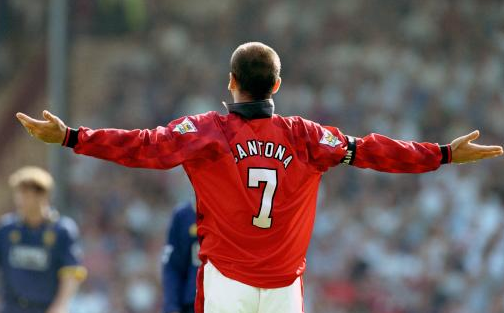 Twenty years ago, Sir Alex Ferguson achieved one of the all-time great transfer coups, persuading Leeds United manager Howard Wilkinson to sell him Eric Cantona, after Wilkinson had enquired about buying Denis Irwin. In his five year spell, Cantona was a catalyst for success that would last for the following two decades, influencing future stars whilst playing with a swagger of a champion, something that United had not been in the league since 1967. Here are his 20 best Manchester United goals.

Cantona only missed one penalty in his Manchester United career and his ability to keep his nerve on the spot was unrivalled. His return from his kung-fu kick ban was hotly anticipated and the Frenchman did not disappoint setting up Nicky Butt for United’s opener, who were then pegged back by two brilliant Robbie Fowler goals. After Jamie Redknapp felled Ryan Giggs in the box, Cantona withstood the pressure to slot past David James.

After opening the scoring for United with a tight finish, Cantona doubled his and his team’s tally with a wonderfully executed goal, volleying acrobatically proving his great technique.

If players want to become cult heroes, it always helps to score against key rivals, and Cantona particularly enjoyed scoring in the Manchester derby. After tapping-in an Andrei Kanchelskis cross, Cantona got his second by dribbling as close to the goalkeeper as possible before deftly dinking the ball under him and into the net. This subtle finish symbolised the cool demeanour of the striker.

Cantona is applauded for the great impact he had on the young ‘Class of 92’ that emerged from the youth team to disprove Alan Hansen’s comment that you cannot win anything with kids in 1995. He clearly had an inspirational effect on the youngsters but one reserve, Ryan Giggs, was already an established first-teamer by the time Cantona was purchased. The two had a good understanding, encapsulated by this goal. Giggs, then a whippersnapper of a winger, ran the length of the pitch before his searching cross was headed aggressively into the goal.

In a game famous for Kanchelskis’ hat-trick, Cantona opened the scoring with the goal of the match. The reason the goal stands out is his instant control of a high-ball, which set the chance up and allowed him to smash into the goal.

Whilst the youngsters did win the league this year, the key reason was the return of Cantona after his ban. He scored crucial goals and played a talismanic, influential role in capturing the title off Blackburn Rovers. In eight games from 4th March 1996 to 8th April, United won four of them 1-0 with Cantona scoring the only goal. He also scored an extra two in victories and a last-minute equaliser away to Queens Park Rangers in this vital spell. His goal against Tottenham epitomised the individual influence he had on the team, picking the ball up by the centre-circle, striding up to the edge of the penalty area before slotting away with his weaker left-foot.

Cantona’s final season did see the Frenchman criticised for his form for the first time in a red shirt. In the league this was not his most prolific season, despite, ironically, seeming to finally have cracked the European Cup. Some would argue that Cantona never really succeeded in Europe, (though a foreigner ban had restricted his appearances) yet goals had come more readily in Europe than in the league that season. His penultimate United goal against Derby, majestically taking the ball down before shrugging defenders off to score, proved that the striker was still blessed and did not suggest someone near retirement.

Whilst famed for his craft and flair, alongside his ability to spot a pass and his deft touch, there was no doubting that one of Cantona’s biggest assets as a forward was his heading ability. This looped header against Tottenham, sending the ball from his position at the back-post back over the keeper and defender’s head, was arguably his first great goal for United.

This goal was a simple tap-in from only a few yards away but it was a memorable goal in the context of a classic game. Trailing to two Niall Quinn headers at half time, Cantona sparked a comeback latching on to a sloppy Michel Vonk back-pass. United had their tails up and were playing with a confidence of a team who would surely salvage the game. The beauty of Cantona’s equaliser is from Ryan Giggs’ exquisite first-time ball but Cantona can take credit not just for tucking it away but for the keepy-uppies that preceded the move, showing his arrogance. As Martin Tyler said in commentary, it was like he had a “baton in his hand and he was conducting the orchestra.” Galvanised by this, Roy Keane grabbed a winner moments later.

In another goal that relies heavily on the skill of Ryan Giggs, who turned Julian Dicks with a imaginative flick, Cantona’s finish was much harder than it looked. On the narrow angle, Cantona was able to score despite the lack of space and gave his team another 1-0 victory.

Cantona played with a swagger that meant that the challenge of playing at a club of United’s stature was never an intimidating one. After securing the title the season before, it was palpable that Cantona understood the importance he had on the team. This solo effort sums up this arrogance. Taking the ball by the centre circle, Cantona casually dodged a couple of QPR tackles, stubbornly ignored the better-positioned Giggs and placed an accurate daisy-cutter past the reach of the goalkeeper.

His arsenal of skills meant that Cantona could adapt to any situation the game was in. Certain goals show his superiority over his opponents, marching around the pitch with a posture as straight as his famous collar. He also possessed an awareness of the other players on the pitch, meaning that he could dictate games; either seeking the pass that no-one would envisage such as to Denis Irwin against Tottenham Hotspur,  or noticing flaws in the opponents earlier than anyone else, proven by this delicate and surprising chip over the ‘keeper at the Dell in 1993.

Again, penalties are unlikely to make it on to a top goals list for aesthetic value, unless it is something unique like a panenka, but Cantona’s double penalties in the FA Cup final were very significant. Chelsea had completed the double in the league against United but after sealing the championship already, United were aiming to be only the fourth team to complete the League and Cup double. The first penalty, after Eddie Newton poleaxed Irwin, resulted in Cantona sending Dmitri Kahrine the wrong way to become the first Frenchman to score in a FA Cup Final. Moments later, Kanchelskis was fouled by Frank Sinclair. Cantona became the first person to score two penalties in the cup final and this one is probably better considering that he had the nerve to place it in exactly the same place as his first.

Newcastle were United’s main rivals in the 95-96 Premiership. Playing silky, attacking football under Kevin Keegan, Newcastle had every right to be confident when they faced United at St James’ Park. They should have been ahead by half-time but were thwarted on numerous occasions by United’s giant ‘keeper Peter Schmeichel. In a scrappy second half, United got the goal that mattered, and just like the Chelsea penalties, this Cantona goal meant more for importance than for beauty. Phil Neville did well to arc a cross over to Cantona but his well-controlled volley is a very underrated finish. This formed a catalyst for United’s surge to the title and started their run of 1-0 matches, whilst also contributing to Keegan’s “love it if we beat ‘em” breakdown.

A blustery January night was the perfect setting for a possible cup upset. United scored their winning goals in the last ten minutes with Mark Hughes opening for them after 80 minutes. Cantona’s goal was sheer perfection in its execution. With Sheffield United chasing an equaliser, Manchester United had a chance to counter, and Cantona and Hughes combined to find Giggs, who waited and then threaded the ball towards the on-running Cantona. The Frenchman steadied himself before nonchalantly chipping the keeper, despite the adverse weather conditions. An act of pure genius.

Some games just need a moment of magic. Manchester United versus Arsenal in September 1993 was a tense affair that can only be remembered for a goal that occurred just after the half-hour. Not renowned for free-kicks, Cantona just used natural power to smash the ball past a helpless David Seaman. United had been at the top of the table since a victory against nearest rivals Aston Villa on August the 23rd and would remain there for the whole season. A remarkable achievement, thanks partly to the impact of the influential forward.

Whilst Cantona was famed for scoring crucial goals, this goal against Liverpool in the FA Cup Final was both extremely important and also, a very good goal. The main highlight of a drab final had been the white suits of Liverpool, whilst both teams played with a palpable tension. The youthful United were on course for their second double in three seasons and played with slightly more intent than Liverpool. However, neither side consistently threatened the opposition goal. In the last minute, a David Beckham corner was headed weakly towards Cantona, who whilst reversing, volleyed the ball through the narrowest of gaps to seal the victory. Whilst it could be argued that he was fortunate not to hit one of the defenders, his ability to skilfully execute a volley, when others would have blasted over wildly, has to be admired.

Cantona’s last brilliant goal was at a time when he was most doubted by the media. His first in the match, a penalty, was his first league goal in three months. His second is arguably the goal most used to summarise his arrogance. He crafts his way past three defenders, increases momentum, plays a one-two with Brian McClair and then, without seeming to look where the ‘keeper is positioned, perfectly chips the Sunderland goalkeeper. He had full control of the pace of the move; speeding up when he wanted it to, culminating in an almost slow-motion finish. His cool, charismatic celebration was surely his best also.

His second long-range belter against the Gunners was awesomely struck. Again the game did not merit such skill but certainly needed it. As the ball was headed out, David Seaman would not have predicted a problem but Cantona instantly knew what he wanted to do with it. Even his chest control is aggressive and purposeful. His brutal smash, blasting the underside of the ball and giving Seaman no chance, was sheer power and sheer class.

Though many could disagree, the goal that best epitomised the skill and influence of Eric Cantona was scored in a thrashing of Wimbledon in the FA Cup. United played beautifully, with Denis Irwin capping the night off with an intricate goal. Cantona’s goal featured all his attributes- control, power, accuracy, technique, awareness and confidence. His instant control cushioned the ball perfectly for the volley, but many players would still refuse the opportunity to volley. Instead Cantona expertly dispatched the ball into the top-corner. A goal that no-one else on the pitch could have scored.

No Copyright infringement intended, these links to video clips are merely to illustrate a point and for the readers’ enjoyment.