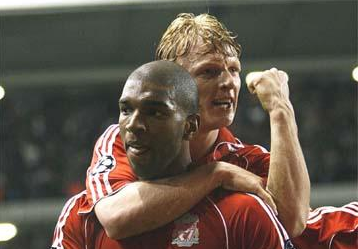 Dirk Kuyt, who marked his 200th league appearance for Liverpool with a goal against QPR on Wednesday, recently suggested to the English press that he would be open to a move away from Anfield, should his first-team opportunities with the Reds not improve.

The 31-year-old Dutch star has proved an invaluable asset to Liverpool since his move from Feyenoord in 2006. Signed as a striker after a couple of prolific seasons in the Eredivisie, Kuyt was quickly converted into a winger by Rafa Benitez because, like a handful of Eredivisie prospects before him, he failed to replicate his goalscoring exploits in the Premier League.

Despite his initial struggles up front (he scored just three league goals during 2007/08), Kuyt soon won over the Kop with his industrious wing work and knack for scoring important goals. And while he wasn’t everything Liverpool fans had wished for in a striker, his record of 71 goals in 276 games and counting is certainly nothing to be scoffed at.

When Kuyt does indeed leave Liverpool his time at the club will be judged as an undoubted success, but he shall remain a legitimate example of the deceptive Dutch scoring charts. Here are a few Eredivisie exports who set the Dutch league alight, but unlike Dirk Kuyt, completely failed to make the grade in the Premier League. In January 2008, Middlesbrough broke their transfer record with the £12.7m capture of Brazilian striker Alfonso Alves from Dutch side Heerenveen. A lot was expected of the 27-year-old striker upon his arrival at the Riverside; Alves scored a staggering 45 goals in just 38 appearances during his short spell in the Eredivisie and had been named Dutch Footballer of the Year the previous season.

Alves took time to settle in the North East, before well and truly introducing himself to the ‘Boro faithful towards the end of the campaign with a brace against Manchester United in a 2-2 draw, soon followed by a hat-trick against Manchester City in an 8-1 thrashing.

The stage was set for Alves to have a blistering full first season in the Premier League, but 2008-09 proved to a fruitless year for the Brazilian; he struck just four times in 31 matches as Middlesbrough were relegated to the Championship.

The physicality of the English game seemed to much for Alves, who often found himself starting from the bench despite ‘Boro’s desperate need for goals during their relegation fight. Any hopes Alves had of salvaging his reputation in England were scuppered when Gareth Southgate, desperate to offload his highest earner on £50,000 a week, recouped £6 million by offloading him to Qatari club Al-Sadd.

“He has all the potential to become the next Thierry Henry. “The pace, movement, finishing, feel for the game; it’s all there. If he keeps developing and improving there is no saying what he might achieve in the game.”

Oh, why did Marco Van Basten have to eulogize Ryan Babel so?

“The next Thierry Henry” is a tag that has hauntingly followed Ryan Babel since his big money move from Ajax to Liverpool. But, to be fair to Van Basten, it was a tag that looked to have at least some merit during Babel’s first year at Anfield.

Capable of playing as a striker or on the wing, Babel scored 10 goals in all competitions during his first season with Liverpool. At 20 years of age and mainly featuring from the bench it was a decent return from Babel, who showcased his raw speed and ability to shoot from range that presumably inspired Van Basten’s glowing words.

The promise of his debut season quickly evaporated and Babel regressed over the following two-and-a-half seasons. He struggled to hold a place in the first team and more often than not failed to replicate the impact from the bench he often contributed throughout his first year in England.

Babel was infuriating to watch. It was clear that he did have the physical and technical attributes to be a success in the Premier League, he just never quite managed to utilize them consistently.

Constantly linked with a move while with Liverpool, Babel was eventually sold in January 2011 to Bundesliga side Hoffenheim. 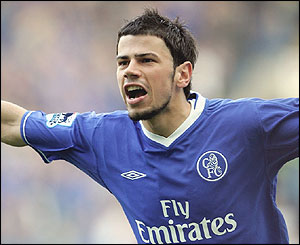 Chelsea looked to have secured a bargain when Jose Mourinho brought Serbian striker Mateja Kezman to Stamford Bridge for just £5.3m. Kezman arrived in London having spent four years with PSV Eindhoven, where he scored 102 league goals in 122 games. Two seasons on the spin the Serb scored more goals than he played games in the Eredivisie.

Kezman’s scored just four times during his solitary season in England before being moved on to Atletico Madrid. It wasn’t all bad for Kezman in England though, he did score in Chelsea’s victorious Carling Cup final win against Liverpool and won a Premier League winners’ medal.

Despite his magical time at PSV and the idolatry the Eindhoven fans shared for him (affectionately nicknaming him Batman when he formed a deadly partnership with Arjen Robben), Kezman credits his unimpressive year in London as the highlight of the career.

Vitesse Arnhem fans probably still chuckle when they reflect on the £2.3m George Graham’s Arsenal gave them for Glenn Helder in 1995. To put that into context, the Gunner’s North London rivals Tottenham spent £300,000 less on German superstar Jurgen Klinsmann just a year earlier.

Klinsmann was a roaring success; Helder was not. The winger spent two years at Highbury, playing 39 times and scoring once. He left in 1997 to return to Holland, where he played sporadically before leaving to ply his trade in Hungary and China.