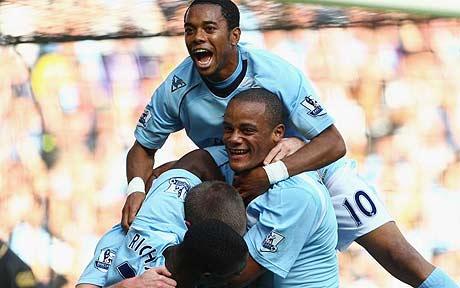 The obvious, and correct answer, is no. Even the mighty Barcelona, beacon of footballing greatness, cannot boast to have two truly world class players in every position. Yes, they have ludicrous quantities of gifted footballers but can you honestly say that the goalkeeping cover at Barcelona is world class? After all, is Victor Valdes even world class?

Manchester City certainly don’t have two world class players in every position, they are still trying to structure the club and build the squad into accommodating one world class player in each position. And they’re doing a decent job of it. The signings of David Silva and Yaya Toure bring not only two more gifted footballers to the club; they also bring a winning culture. Silva, a World Cup and European Championships winner and Toure, a Champions League winner, will add the steel needed to chase titles, and may bring some success too!

The latest signing, Alexander Kolarov, sees Mancini returning home to Lazio to storm the breaches of Rome to capture the much coveted left-back. Kolarov is not world class, but he could be. As Manchester City grow as a club and as a name, players like Kolarov will have to grow as a player and as a name to avoid being relegated to the bench for yet another summer signing.

Manchester City’s millions do not just give them carté blanche to chase the world’s most coveted players it also gives the players at Manchester City the drive to perform, knowing that a bad six months could see them become just another squad player as the January transfer window looms and City will be able to flex their financial muscles all over again.

3 thoughts on “Enough cover to cover the cover.”