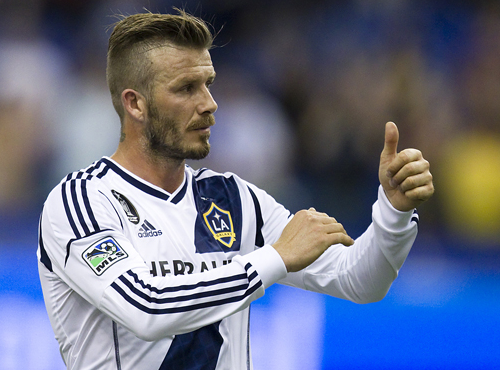 A week after Sir Alex Ferguson and Paul Scholes announced they’d be retiring, another Manchester United legend announced his plans to call it a day.

Cue broken hearted women – and men – everywhere, as after this season David Beckham: the player will be no more.

To many, he ceased to be when he decided to swap La Liga for Los Angeles. For some – those without much interest in football – he never really existed at all. He was a celebrity, a brand; the fame, the fortune, the fashion, and of course the pictures of him in his underwear all seemingly transcended what he did on the pitch.

But it was on the pitch that he made his name, and on the pitch where he was happiest. Strip away all the trappings that led to his becoming the global football icon of his generation, and you’re left with a man who just loved to play the game, especially for his country.

The lofted goal from the halfway line against Wimbledon; the perfectly-placed corners against Bayern; *that* free-kick (and, indeed, entire performance) against Greece – and countless carbon copies as well; the penalty against Argentina. An endless amount of inch-perfect crosses; Hollywood balls from a player who was total box-office.

Manchester, Madrid, LA, Milan, Paris. Fashion capitals of the world – and, er, Manchester – they love a star, and Becks has certainly been football’s, if not all of sport’s, biggest. While he may have used this celebrity to boost his own sponsorships and earnings, he never stopped promoting the game either.

He is the soccer player who appeared on US chat shows, giving an ‘English game’ global appeal, in the States and also, notably, Asia. He’s the ‘only-cares-about-the-money’ player who gave his final wages to a children’s charity. He’s the man who helped lead the successful bid for London 2012, and it would’ve been London 2018, too, were it not for FIFA being, well, FIFA.

It’s easy to be cynical. There are times when one could have wondered what mattered more to him, yet surely he has proved time and again – the loan moves to Milan, the flights around the world to make any contribution he could to England – that football was first.

Certainly, for all the media furore that has surrounded him, he has conducted himself in a far better manner than many of his peers. Not the most talented of his generation, he epitomises how far hard-work and determination can take you. You can see why Sky, China, The FA and all those others who are likely eyeing him up want him to be an ambassador for them and the game. For any youngster taking up the game, he’s the perfect role mode

Brand Beckham will continue to grow, but it’s the footballer who deserves to be remembered.