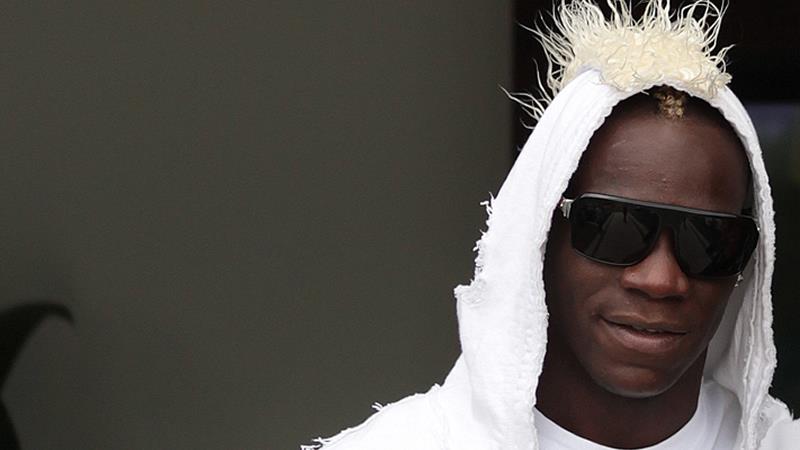 Moments of redemption in football rarely come at the age of just twenty-one but, perhaps, this encapsulates the fact that, while he is certainly unpredictable, Mario Balotelli represents so much more than just the lazy notion of a capricious enigma.

Nicolas Anelka (fall-out with PSG’s coach, Luis Fernández, leading to a loan to Liverpool in December, 2001), Antonio Cassano (flashing of the sign of the horns in being sent-off in the 2003 Italian Cup final against Milan) and Wayne Rooney (stamp on Ricardo Carvalho’s groin in the quarter-final of the 2006 World Cup) were also boisterous subjects of media obsessions in the respective countries they operated in. However, the delicate age of twenty-one – where the above-mentioned incidents occurred – was, effectively, a nadir footballing year for these players: a season where their reputation was marked, or at least tarnished, by a negative and unsporting moment where silverware and atonement were not found as consolations.

Still, by the end of last season, it seemed that Balotelli had yet to sink to his lowest ebb as even though the Italian played a huge role in Manchester City claiming their first title – after, naturally (was on the field for less than twenty minutes, in the most frustrating, and important match in City’s history, yet retained his often-trademark composure), coolly slipping through a remarkable toe-poke pass for Sergio Agüero to brilliantly finish to put City 3-2 up against QPR on 13 May, 2012 – 2011/2012, like his other full senior years in 2009/2010 and 2010/2011, was marked by distrust, lampoonery and chronic inconsistency. After all, bizarrely, Balotelli perfectly embodied, and probably still embodies, Issac Newton’s laws of notion, that is, that every action, eventually, merits an equal and opposite reaction – and that is, remarkably, without even going into Balotelli’s actions off the field.

Take the crucial 3-2 victory over Tottenham on 22 January, 2012, where, moments after stamping on Scott Parker (subsequently led to a four-match ban), Balotelli slotted home a 93’ penalty to win City the match. Then, on 31 March, Balotelli scored two goals to earn City a precious (given the circumstances, in being 1-3 down by 90’) point at the Etihad, but before these goals, unforgivably and incessantly, Balotelli squabbled with Aleksandar Kolarov over the taking of a twenty-five yard, left centre free-kick that was entirely suited to the Serbian’s wicked left foot. Finally, on 8 April, following numerous hacks (one of which, on Alex Song, should have led to a nine-match ban), Balotelli was sent-off against Arsenal in, seemingly, his last ever match for City. Fatefully, for Balotelli, his return from the three-match ban, following Roberto Mancini’s enforced exclusion of the Italian during the 1-0 victory over Manchester United and the 0-2 win over Newcastle on 30 April and 6 May respectively, was as a desperate trump card by Mancini against QPR.

Then came Euro 2012: Balotelli’s first ever international tournament, but one that brought with it initial moments of stage-fright. Undoubtedly – given that he relished Cesare Prandelli’s bravery (Balotelli is the Azzurri’s first black tournament footballer and La Gazzetta dello Sport’s King Kong cartoon on the eve of the match against Croatia, where Balotelli endured racial abuse on 14 June, encapsulated the country’s still-evolving racial assimilation) and faith in giving him his first cap against Cote D’Ivoire on 10 August, 2010 – this fear was owed to flashbacks to tearful episodes against Roma and Juventus in Serie A in 2009. After all, pre-tournament, Balotelli threatened to walk off the field if he received any racist taunts from the crowd. Against Spain, in the opening match, this was clearly on the agitated youngster’s mind and while his uncharacteristic freezing and dalliance when one-on-one against Iker Casillas on 50’ was unforgivable, Balotelli witnessing his replacement, Antonio Di Natale, netting Italy’s equaliser, remarkably, awoke the spikiness and self-belief in him. 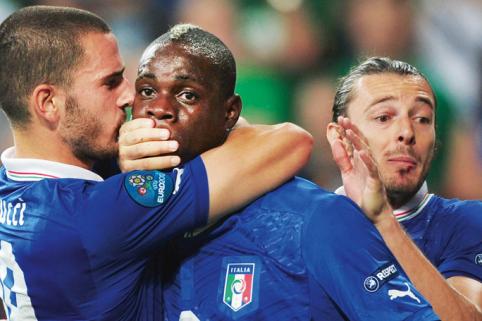 Subsequently, Prandelli, who had wrapped Balotelli in cotton wool up to this point – in shielding criticism of the striker’s poor work-rate, attitude and goal return (just one goal in eight international games before Euro 2012) – produced a masterstroke of sorts in his decision to drop the striker. Most players would have been hurt, terminally, but Balotelli – despite, maybe even because, of his tempestuousness – used it to inspire him. Given Prandelli’s actions throughout the tournament, from re-uniting a country behind a footballing cause following the Calcioscommesse match-fixing scandal to showing admirable tactical ingenuity in effortlessly shifting his team from a 3-4-1-2 to a 4-4-2 diamond in certain scenarios, there was nothing to suggest that this was an accidental move.

Either way, it riled Balotelli against Ireland on 18 June and while few expected him to make an impact in his fifteen minute cameo before the end of the match, the striker struck a fantastic, standing bicycle kick on 90’. Unsurprisingly, that was not the end of the matter, though, and Balotelli, in ‘celebration’, was prevented by Leonardo Bonucci from uttering a potentially tournament-ending phrase aimed at Prandelli in English. This episode augmented the fact that Balotelli, in a rarity for Italians (it is no coincidence that Marco Tardelli’s celebration against West Germany in the 1982 World Cup final often still remains as the word’s immediate connotation in football), does not gleefully celebrate goals but Prandelli was unmoved if not, even, impressed by Balotelli’s submerged passion and determination.

From this, Balotelli was restored for the quarter-final against England on 24 June and despite missing numerous chances, Balotelli – owed to Italy’s use of balls over the top – continually got himself into goalscoring positions and scored the crucial (reflecting Ignacio Palacios-Huerta’s theory that the team that goes first wins 60% of penalty shootouts) opening penalty in the shootout against his teammate, and close friend, Joe Hart. Then, came Germany and the greatest individual performance of Balotelli’s career to date. Everything, from a supposed lack of a big-game temperament (José Mourinho’s belief at Internazionale, having given a tearful Balotelli a “zero rating” after a 1-1 draw with title challengers Roma on 8 November, 2009) to a supposed lack of emotion was abolished on the night of 28 June at the National Stadium, Warsaw.

Unfazed by the occasion, Italy being underdogs and still-incessant skepticism over his continued selection by Prandelli, Balotelli, and the particularly unselfish Cassano (the one-time bambino terribile has been a keen influence for a still-maturing Balotelli), tore apart the, upto this point in Euro 2012, impenetrable Mats Hummels and Holger Badstuber. Overpowering and maturely peeling away from Badstuber, Balotelli headed in an thumping opener past a helpless Manuel Neuer from a brilliant, hooked Cassano cross on 20’. It brought about Balotelli’s Tardelli moment – which was clearly instinctive and a reflection of the fact that the occasion, and representing Italy, clearly mattered to Balotelli – and, roaring, he shook his shirt three times before, in trademark fashion, trotting away from his teammates. Then, emphatically, Balotelli followed his first goal up with a fantastic twenty-yard thunderbolt into the top-right hand corner of a stationary Neuer’s goal, after a beautiful ball over the top from Riccardo Montolivo on 36′. 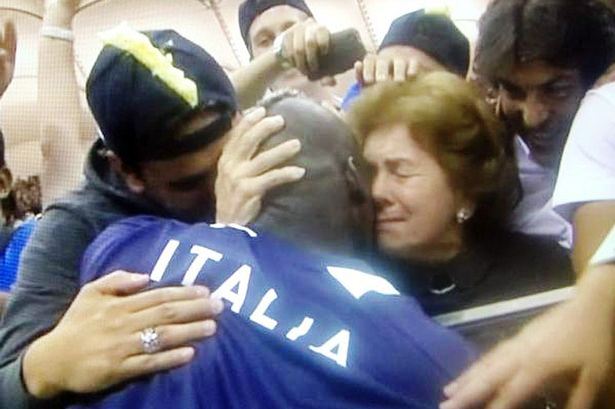 Just as it seemed that Balotelli would again show a glimpse of emotion, with the striker seemingly about to embark on a sprint into the crowd after removing his shirt at pace, Balotelli, and the footballing world, momentarily stopped. Balotelli, with a blank expression amid the 58,800 throng, tensed yet, somehow, still strutted his chiselled frame. However, far from it being self-parody – unlike the ‘Why Always Me’ undershirt against United on 23 October, 2011 – Balotelli, in his natural, stripped down state, was, in that moment, untouchable. Thus, while some of the Italian public had, up to this match, struggled to relate to Balotelli’s Ghanaian biological parentage, his post-match embrace with his adopted mother, Silvia, cemented his standing as, quite simply, an Italian: attitude, spunk, a keen maternal bond and a nickname, il Postino (the postman).

Therefore, in effect, regardless of the result, his restless (initially stormed off the field after the final whistle) final against Spain on 1 July was redundant: Balotelli had proven himself to Italy, in overcoming a battle with his inferiority complex due to the fact that he could not claim citizenship until he was aged eighteen, and the footballing world. Now comes the interesting part: can Balotelli continue his application, hunger and form into the Premier League season? Sure Mancini, ultimately, has faith in him, but – the Italian’s fairly anonymous display as a striker in a 3-4-1-2 apart, against Liverpool on 26 August, 2012 – in continuing to the deploy Balotelli in a withdrawn role on the flank and as a substitute, Balotelli’s frustrations will remain.

This is not, psychologically, just down to the fact that Carlos Tévez and Agüero will, therefore, be Mancini’s main men as the central figures in a 4-2-3-1/3-4-1-2; rather, more obviously, it is because Balotelli will have less goalscoring chances and the pressure he will put on himself to impress as an individual, given the unnatural position and the usual importance of tracking back and teamwork of a status quo flank player – which the Italian is certainly not – will accentuate. Still, perhaps, 2012/2013 will prove to be the year that the twenty-one year old Balotelli displays the maturity, composure, patience and tactical ingenuity to operate in an often withdrawn role (a la the once-temperamental Samuel Eto’o in 2009/2010, although that was under Mourinho and at the age of twenty-nine) or, maybe, as a reward of eventual renewed application, Mancini will plump for the Italian and Agüero up front if Tévez, near-inevitably, becomes disillusioned with football again.

Judging by Balotelli’s holiday exploits in Ibiza, racking up a £4,000 bill in one night at Linekers and smoking a hookah, it may be tempting to suggest that Euro 2012 has had little effect on the still-maturing, twenty-two year old striker. However, with the possible embracement of fatherhood with his former fiancee, Raffaella Fico, and Mancini’s still-unwavering support (rejected a substantial bid from PSG in the summer and has instigated contract renewal talks with the striker), 2012/2013 could prove to be the year that Balotelli, on the field at least, finally emerges from his prolonged adolescence.

One thought on “Emerging from a prolonged adolescence: A defining season for Mario Balotelli”