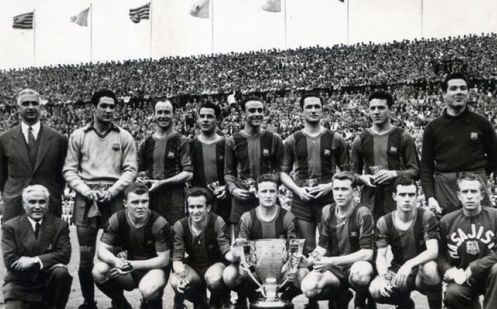 Two out of three.

That, according to the Madrid based sports daily AS, was the outcome of the weekend. The two in question were the dual ‘Spanish’ triumphs of the diminutive Asturian speed-merchant, Fernando Alonso and his deft handling of a catastrophically expensive car, alongside Mallorcan muscle boy Rafael Nadal’s victory in the Madrid tennis tournament thingamyjig.

The unmentioned third was supposed to be Real Madrid’s conquest of Europe. It didn’t happen as they were routinely out done by Olympiakos in the European Cup final in London.

No, you haven’t been asleep for a fortnight. And no, you didn’t dream Real Madrid’s capitulation to Jurgen Klopp’s waspish wunderkinden, it’s just that in the absence of anything to cheer on the hallowed turf of the Bernabeu, AS and it’s unashamedly pro Real Madrid flat mate Marca decided it prudent not to mention that Barca won the league on Saturday night after Madrid could manage only a draw at Espanyol.

Yep, after seven months the inevitable has finally happened and Barcelona have deservedly won their twenty second La Liga title. On top of the league since September their loses were few and improbable; Getafe and Real Sociedad, yet it was off of the pitch that perhaps their greatest enemy lay.

Being Tito Vilanova isn’t the title of a self-regarding post-modern Hollywood navel gazing think pic, but after his year it probably should be. That the man has picked up the reigns of the care worn Pep Guardiola, steadied the ship and delivered another title is difficult enough. Doing it whilst worrying about your own extensively publicised health issues from the other side of the Atlantic is another. Okay he’s been more than ably assisted by the lego haired hardcase, Jordi Roura and whilst the FC Bayern cock-up coupled with the over-reliance on Leo Messi will have to be addressed, that doesn’t diminish the achievement. So, well done Tito and Jordi, have a glass or two of that tinny tasting Voll-Damm or Cava and crack-on with re-building tiki-taka’s prize exponents before we have the less than thrilling prospect of hearing the engineered ‘crowd’ sounds at the Allianz Arena in perpetuity.

Back to the open war/comic opera that is the Bernabeu. It seems that Jose Mourinho’s protracted exit is going to roll-on as Roman hadn’t previously noticed that Jose’s contract release comes with a pay-off in neigbourhood of twenty millions euros. Does this mean the Portuguese may have to see out the remaining three years of his sentence in Madrid? Probably not. The self styled Special One is about as popular amongst the Bernabeu hierarchy as a corruption tribunal, and that some of his lustre has been dulled over the season suggests that some sort of compromise will be found whereby a quicky divorce settlement can be agreed sooner rather than later. To add a bit of ‘funny’ into the weekend mix we were treated to the sight of Kajagoogoo’s Limal looky-likey Coentrão sitting on the bench before kick-off despite not being picked. You have to wonder what he was listening to in the pre-match team talk – presumably Mou still isn’t speaking to the squad.

Away from the mega-buck driven lives of the big two, we’re finally starting to see where how the chips may fall come seasons end when weekend began with Levante against Real Zaragoza. There was to be no repeat of the three goals in the first half hour shocker here, though. In fact, there were no goals in entire ninety minutes. The point a piece leaves Zaragoza only two points ahead of the drop zone with Levante quaking at the prospect of off-form Rayo turning up next week.

Saturday’s early game saw Bilbao win the grapple for three points against sinking Mallorca. Los Leones two-one victory leaves them on forty one points and (probably) safe. Mallorca, by contrast are now rooted to the bottom, five points from safety with only three to play. Doesn’t look good, does it?

Talking of grim outlooks, Depor’s isn’t exactly a whimsical watercolour either. After their revival of a few weeks ago they’re now back where the started – in the drop zone. A one nil away loss to Valladolid did them no favours, although they are only two points off of safety.

Osasuna did their own survival chances the power of good with an excellent one goal to nil victory over Europa dreamers Getafe. The boys from Pamplona would now have to execute a volte-face of Kevin ‘I’d Love it!’ Keegan’s proportions to go down, but such is the inconsistency of teams at the bottom this season, I wouldn’t bet against it. And whilst we’re on inconsistency Getafe could probably spin a yarn or three.

Sunday was blue-skied, warm and sunny. Children were dancing in the street, lambs gambolling in meadows and the cool, thirst quenching pre-match beers were going down like a liquid elixir. Unfortunately, that was as good as it got for a Rayo team whose Europa League aspirations are fag-paper thin after getting thumped by four goals to nil by a Europe bound Valencia team – whether it’s Champions League millions or Europa league pennies remains to be seen.

Betis then did their own Europa League wishes no harm with a single goal victory over a second from bottom and slipping Celta Vigo. The Galicians were rightly miffed that a legitimate goal was ruled out for offside, although the Verdiblancos had enough muffed opportunities to win the game three times over.

Atleti have eyes only for Friday and the Copa del Rey final against Real Madrid on Castellana. Yesterday at the Calderon they were only too please to give Barcelona the traditional happy-clappy tunnel of love thing – or Guard of Honour – that teams are treated to when they’ve just become champions. Somewhat less traditionally, Atleti’s Gabi was the inadvertent scorer of Barca’s winner in a bagatelle moment that resembled every single playground goal ever scored. On a side note starman

Leo Messi picked up a ‘knock’ which renders him out for the remainder of the season. That’ll give Tito a chance to get some practise in without the Rosarian before the latter’s shock move to Reading FC. You heard it here first.

Malaga and Sevilla then found themselves scrapping for Europe, assuming some sort of appeal is in place against the UEFA imposed Malagueno ban. Scrap and scrape they did, score they didn’t.

The weekends final fixture was yet another European Visa/Exit Visa encounter played out for the benefit of the cameras on Monday night in Donostia. La Real needed to pick up their form of a few weeks ago against a Granada team for whom anything would have been a result.

That’s it for another week.

As mentioned, it’s the Spanish Cup Final on Friday, with Atleti going to the Bernabeu in search of the sweetest of triumphs against Real Madrid to take their tally from nine to ten cup wins. In a season that has been replete with Real Madrid fans and players alike talking of La Decima (the tenth European Cup win) the irony of their rivals winning one of their own, on their own pitch may be too much to bear.