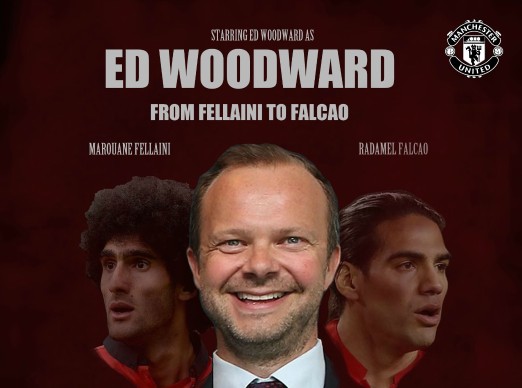 Let’s get one thing straight: I have not always been a fan of Ed Woodward. Sure, his job of filling David Gill’s shoes has been almost as hard as David Moyes’s task of replacing the club’s greatest manager, but after last summer’s shambles he is lucky to still be in a job.

With the dull rumble of perpetual anti-Manchester United attacks that seems to be the background noise to every pub conversation these days, however, I started to wonder if in fact he is secretly a genius.

Leicester City’s stirring comeback last Sunday may have been kickstarted, on the score sheet at least, by a refereeing oversight as Mark Clattenberg missed a simple shoulder barge from man-of-the-match Jamie Vardy on Rafael. No reasonably insightful spectator could deny that the Premier League new boys deserved their moment in the sun after a fabulous display of counter-attacking football though, as the much maligned United back line failed to close out a two-goal lead twice in the match.

The main sticking point over the summer for Red Devils fans has been the failure to bring in a solid, experienced face to replace two rocks of the last decade in Nemanja Vidic and Rio Ferdinand, and the last 30 minutes at the King Power Stadium gave more ammunition to those arguments.

The reaction to the blockbuster signings of Colombian hitman Falcao and Real Madrid assist-king Angel di Maria was somewhere between frenzied, awestruck excitement and nervous apprehension for United fans. Unwrapping over £100 million of talent has been pure fantasy football. Got Van Persie? Partner him with Falcao! £37 million on Mata? £60 million on Di Maria!

Then when the giddy drunkenness gave way to hungover sobriety, the realisation that the starting back three wasn’t likely to strike fear into the heart of opposition or fill Old Trafford with confidence set in. Should we feel spoilt with a tinge of guilt at the ludicrously extravagant attacking talent, or should we be nervous about the fragility?

Last summer was an embarrassment. Woodward publicly announced he was leaving the club’s tour of Australia to attend to some urgent transfer business, with a deal for Cesc Fàbregas seemingly in the bag. This was the new man’s chance to win over the supporters with an astute signing – a midfield schemer of this class was exactly what United needed.

The bravado of such a dramatic move from the executive vice chairman was punctured by the deafening silence that followed. Flopped bids for Thiago Alcânatara, who opted for a squad role at Bayern ahead of a guaranteed starting spot at Old Trafford, Sami Khedira and Fábio Coentrão came and went. There were the three impostors who managed to successfully blag their way into the offices of Atheltic Bilbao masquerading as negotiators for the transfer of Ander Herrera, until someone thought to actually check their credentials. Not Woodward’s direct fault admittedly, but could you imagine anyone trying it on under Daniel Levy’s nose?

Then Moyes’ slight at his old club ruined any chance of a reasonable discussion about Leighton Baines and Marouane Fellaini, when he said that refusing to allow the two star players the chance to join him at United was ‘holding them back’, after a ‘derisory bid’ of £27 million for the pair had been turned down flat.

At least there was the chance to guarantee talks for the Belgian battering ram via a release clause set at £24 million – instead United waited until after the deadline had passed, and ended up spending £27 million on him alone. Woodward’s claims at the time that ‘we had always wanted him’ were so laughable given the release clause debacle, only to be equalled by the inept performances of the man in question throughout the ensuing season.

The Chosen One’s disastrous season lurched from one excuse to another after he was handed a one-dimensional panic buy having been publicly promised a £100 million war chest, and record after record tumbled as humiliating home defeats to West Brom, Swansea and Sunderland piled on the pressure. Negative sound bites that did not befit the man in the hottest of hotseats compounded the gloom that gathered over the Sir Alex Ferguson Stand as rivals rubbed their hands in glee at finally being able to laud it over United. It was a relief when the season finally ended, and the Moyes experiment was brought to an end. What was needed was a spark, a sense of fun, anything to lift the crushing negativity.

And this is where Woodward’s potential masterstroke comes in. Expectations for this season have been lowered to remove a realistic title challenge from the equation, even though a reported clause in the eye-watering Adidas kit sponsorship deal, due to start next season, requires Champions League qualification for the full £750 million over ten years.

Defensive frailties aside, in the space of two months a sparkle has returned to United’s play that could inspire the swagger that Old Trafford demands. Results have been poor, but now after the formation has settled into a more suitable diamond setup to get the most out of Blind, Di Maria and Rooney, a season of arrogant, in-your-face free scoring awaits. In such a results-orientated business, it is refreshing to have such open entertainment, and it is exactly what was needed to blow away the dreary cobwebs of last season.

Mike Phelan exposed a valid grievance about one side effect of this glamorous overhaul. After local lad and youth academy graduate Danny Welbeck was sold to Arsenal, he claimed that the club ‘had lost the Manchester United way a bit’ by selling off one of their own. Something had to give to accommodate the world class talent coming in.

Once super sub Javier Hernández had departed on loan to join Real Madrid’s bench, in a three-way battle between newly-appointed club captain Rooney, international skipper Van Persie and Welbeck, there was only likely to be one loser. Perhaps more worryingly is the detrimental effect the change of formation and personnel is going to have on the rising star of Adnan Januzaj.

After a breakthrough season, the Belgian 19-year-old was then rewarded with the honour of wearing the number 11 shirt worn by record appearance holder Ryan Giggs, only to find the new manager’s plans didn’t include a classic winger. A season of stagnation would be extremely damaging to the teenager’s confidence after receiving such deserved adulation from all quarters, and if his prospects don’t improve by the end of the season, it is hard to see him happy to spend the formative years of his career as a back up.

The appointment of Louis Van Gaal was a bold but clever one – a disciplinarian with one of European football’s great CVs and a penchant for fast-paced, intelligent and entertaining play. His relationship with Van Persie, his international captain with the Netherlands, should help juggle the egos of the three world class strikers at his disposal. He has already shown flexibility to adapt his wing backs formation (which many people erroneously believe is his favoured setup; it was only originally a stop-gap for his national side until the players took to it so well, notably Blind himself) to a diamond formation, finding the best positions for his key players.

This is in stark contrast to the stubborn rigidity of his predecessor – remember that ghastly Premiership record of 82 crosses delivered against Fulham? Woodward deserves credit for getting his head down and sorting out the mess from last season, and realising who he had to bring in. Jose Mourinho is one of the few others in world football who could have taken on the enormous task, but somehow he would never have quite hit the spot with United’s faithful with his singular self-absorption.

Has Ed Woodward redeemed himself this transfer window? Is the fun factor that we needed back, if not necessarily instant silverware? I would argue it is in the balance – there is one last major input he needs to have this season, which is to ensure the defence is sorted out, before he can sit back and watch as his handiwork bears fruit.  Common consensus has it that someone in the mould of Jaap Stam is the answer, perhaps even Ron Vlaar, who would surely be a reasonably priced option.

I’m going to throw this out there – I wouldn’t sign a defender in January. The options available at the season’s halfway stage are unlikely to be of high enough quality to be a long-term option, so why spend around £20 million on someone who won’t quite do? Phil Jones has a lack of pace that is too often exposed, but as part of a back three alongside the more mobile Marcos Rojo and either the experienced Jonny Evans or the agile Chris Smalling, he could finally realise that he is not a holding midfielder and cement his place as the commanding captain material he was bought as.

Tyler Blackett is raw but assured, and let’s face it, if he isn’t given a chance in this transitional season, when will he be? The chances are, the defence will stay as a back four anyway given the success of fitting Falcao, RVP, Rooney and Di Maria in their favourite positions with the diamond. With those five to cover two places, as well as the emergence of Patrick McNair and Tom Thorpe, some continuity might be the answer.

Perhaps this is what Woodward was thinking by not breaking the bank for an Eliaquim Mangala or a Mats Hummels. A Zidane y Pavones, United style; if only for a season. With so many people clamouring for yet another big name at the back, perhaps the grinning Glazer-appointed head honcho knew what he was doing all along. He needed the right man in place; he’s got him. He wanted some bona-fide world class talent on his turf; he’s got it. Falcao et al, now it’s over to you.