Cork City boss John Caulfield is rarely short of a compliment for prospective opponents, but there was little doubting his sincerity when, ahead of his team’s trip to Richmond Park, he described St Patrick’s Athletic as “the Arsenal of the League of Ireland.”

Beyond the obvious similarity of strip, it’s an apt comparison: Liam Buckley’s side play a structured, highly-technical game that makes them the most attractive side to watch in the division and, when at full tilt, are the most devastating attacking force in the country.

Stephen Kenny’s Dundalk have rightly inherited the mantle of the league’s entertainers with their displays over the past 18 months, but Pats’ procession to the league title in 2013 , built on a solid defence playing from the back with attacking verve, set the standard for the current champions. 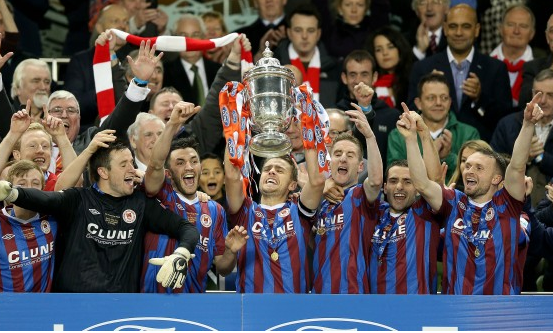 Caulfield’s comparison, whether intended or not, reveals more about the Inchicore club than mere platitudes. The London club have earned a reputation as perennial bridesmaids in the English league: frequently threatening to steal the show, they generally end up the entertaining sideshow.

Pats’ FAI Cup win – after 53 years of hurt – closed an unwanted chapter in the club’s history, but it failed to mask the deficiencies that saw their title defence falter almost as soon as it had begun, and they were out of contention for the top spot early in the campaign as the previous season’s runners-up Dundalk and surprise package Cork City fought it out.

The return of Ireland international Keith Fahey after a spell in the Premier League with Birmingham led Kenny to dub Pats the “Galacticos”, but the midfielder returned to a club much-changed from the free-spending club he’d left five years previous.

An early-season boycott by ultras group the Shed End Invincibles – which was damagingly apparent during a poorly-attended televised fixture at home to Limerick – typified a club struggling to maintain its status, and the damage caused by the departure of captain Conor Kenna to Shamrock Rovers, John Russell to Sligo and striker Anto Flood to Australia couldn’t be masked by a luxury recruit.

The fact Kenna and Russell were replaced by Rovers cast-offs Ken Oman and Conor McCormack summed up the quandary in which the Saints found themselves – unable to generate the gates of their competitors in Dublin, Cork and Dundalk, they had to rely on their status and the largesse of owner Garrett Kelleher to maintain a gradually diminishing squad.

The off-season preceding the 2015 season saw the repeat of a similar pattern: Fahey said his goodbyes and moved a few miles down the road to Tallaght, while Pats – having been outbid on key target Ronan Finn – were left with another pair unwanted at Rovers, Jason McGuinness and Ciaran Kilduff.

Their unimpressive start to the 2015 season, which has seen meek losses at Rovers and Dundalk, as well as draws with mid-table operatives Longford and Drogheda, presents Buckley’s side with the prospect of a battle for fourth place and European football – the minimum required to sustain their current budget.

A good win away at Bohemians has served to keep them in touch with their Dubin rivals – whose sparkling start to the season will surely falter over the duration – but the subsequent draw at home to a limited Drogheda United side, managed by former player John McDonnell, is further evidence of the inconsistency that’s dogged them since they lifted the league trophy 18 months ago.

The problems besetting Pats appear similar to the problems faced by many teams who overachieve on the back of a highly-structured, well-executed system. Keith Fahey, having left for Shamrock Rovers after just a year, said Buckley’s “rigid formation” led him not to enjoy his football – and such frustrations will become more common if the deterioration continues.

One of the benefits of the system is that players can routinely slot in positions to which they aren’t suited. Midfielder James Chambers thrived as a rampaging right back against Derry, and Killian Brennan performed well as an auxiliary centre-half last season; while a Rovers player in 2012, Brennan had endured a roasting at the hands of Chris Forrester when facing Pats at left-back.

Pats under Liam Buckley have, at times, resembled the intricate working of a clock – each part working in synchronicity to produce something more beautiful than the sum of its parts. The trouble with even the most well-worked system is that, by its very nature, it’s predictable.

Arsene Wenger faced it as his Arsenal side aged; Roberto Martinez is currently facing it as his Everton side struggle to replicate their Champions League challenge in 2014; Marco Bielsa faced it as his Athletic Bilbao side challenged on multiple fronts, and he faced it again this year when his wildly successful Marseilles was stood up to scrutiny.

Likewise, St Pats appear to be in the throes of a graduated decline. Kenny noted his opportunity to outdo Buckley at his own game when he assembled a young and hungry side in Dundalk who were content to play positive, attacking football with a sprinkling of stardust in the form of Richie Towell.

Last season, Buckley’s charges were able to compensate for their reduced effectiveness by the goalscoring form of PFAI player of the year Christy Fagan and winger Conan Byrne, but those too have been targeted in this year’s opening series, and the pair have only a goal each from the first nine games.

Time will tell whether Pats’ slow decline becomes terminal, or if Buckley can adapt his system to triumph over better-resourced sides, but even at this early stage, sitting eight points from the league leaders, Liam Buckley faces an uphill task to stop his team’s season dwindling into irrelevance.