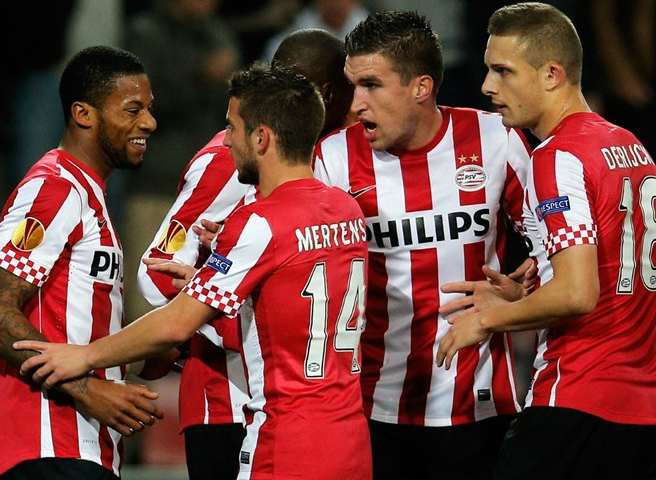 The Dutch Eredivisie has long been noted for its goals, not only the quality of them but the bucketfuls they come in. No top league in Europe has a higher average of goals per game this season with an average more than three goals per game banged in during the opening half of the season. And, as the league enjoys a four-week winter break at the mid-way crux of the season, it is no surprise to see that goals mean plenty.

In a tight championship battle in which just five points separate the top five teams, free-scoring PSV Eindhoven are benefitting from their goalscoring exploits. A 6-1 away win at NAC Breda in the most recent of their 18 games played saw PSV reach the 60-goal barrier to top the table on goal difference. That difference is +42, double that of FC Twente who share the same points, underlines just how crucial goals have become. Remarkably not one PSV player has reached double figures in the Eredivisie with the goals shared between Tim Matavz, Dries Mertens and Georgino Wijnaldrum amongst others.

Like PSV, FC Twente, coached by Steve McClaren, have have won 13 of their opening 18 games. They have lost just twice all year, two less than PSV, but are paying for four drawn games. Victory in one of those would have meant outright lead in the Eredivisie for the team with the meanest defence. But the message harks back to the number of goals scored – 25 less than PSV in fact. Twente have a reliance on goals coming from Luc Castaignos, Dusan Tadic and Nacer Chadli, the trio having netted almost three-quarters of the 35 goals between them.

Reigning champions Ajax, last year’s Feyenoord and Vitesse Arnhem, the surprise package of the season, remain firmly in the title hunt at the half-way stage. The former pair are just three points adrift of top spot, while Vitesse are a further two points back. Ajax are paying the price of seven draws, without some of which they would be clear at the top. Beaten just once, they are being made to pay for five away games ending in stalemate. If able to overcome the drawitis, the wise money would be on another Ajax title at the end of the season. Feyenoord, meanwhile, have flown into contention, dropping just two points since November 11. Six wins and a draw in that period have cast aside memories of a dismal start to the season in which Ronald Koeman’s side won only five of their opening 11 games. It is the goalscoring exploits of 14-goal hitman Pelle (no, not that one, but Graziano Pelle who is on loan from Parma in Italy) and Lex Immers (10) that has fired Feyenoord into the title frame again, the same applying to Vitesse who have the Eredivisie’s leading marksman Wilfried Bony, who has found the net 16 times, to thank for their role in the battle. Never crowned champions before (they’ve been runners-up on six occasions), Vitesse were the team to catch at the start of December, but signing off the first half of the season with two away defeats – they previously had a 100 per cent record on the road – and a draw at home has left them five points adrift. The break could not, perhaps, have come at a better time for them as they look to regain the form that made them so dangerous to the big four teams. As ever, in typical Eredivisie fashion, we can expect this one to go down to the wire, where goal difference could count for plenty.

At the other end of the table, Willem occupy the automatic relegation spot having picked up 12 points from the opening 18 games. Two draws in the opening two games was a relatively positive start for the newly promoted side, but they picked up only four more in the next 11 games to be left rooted to the foot of the table. However, one defeat in the last five games has doubled the points tally and given renewed hope of avoiding an automatic return to the Erste Divisie.

Now, just three points separate the bottom five and there are just five points between one-time champions AZ Alkmaar in 12th in the table and Willem at the bottom. Venlo and NAC Breda, who sit in the relegation play-off places having amassed 15 and 14 points respectively, are firmly in trouble at the half-way stage of the campaign, as are Roda and Eredivisie newcomers Zwolle, who are both spared a place in the dreaded drop zone thanks to a better goal difference than Venlo. Alkmaar and Heerenveen finished fourth and fifth last year but there is a serious risk of them being dragged into a scrap for survival having endured torrid opening halves to the season. Should Heerenveen lose Alfreo Finnbogason, the joint second highest goalscorer in the division having netted 14 times, during the transfer window, with AC Milan and Aston Villa among his suitors, then who knows where they will end up come May. As always, the Eredivisie is never predictable. Expect a dramatic second half to the campaign.