Ireland’s largest LGBTQ+ and inclusive football club, Dublin Devils FC, are just mere days away from the biggest match in their 18-year history.

At 2pm on Saturday 28 May, the Devils will face off against Village Manchester FC in the final of the Gay Football Supporters Network Cup. This mammoth tie will take place in Shelbourne’s recently saved Tolka Park.

The Devils kicked off their GFSN Cup campaign with a 3-1 win away to Birmingham Blaze. The Dubliners then took the spoils in a dramatic 4-3 victory in the English capital as they overcame a determined London Titans outfit in December 2021. The Devils have benefited from the fact that both their quarter-final and semi-final showdowns were played on home soil, an advantage which they made the most of. A Jamie Martin hat-trick helped his side to a resounding 5-1 quarter-final victory against Charlton Invicta in February, whilst Jack O’Toole’s heroic semi-final hat-trick versus Yorkshire Terriers in March has paved the way for the Devils to take on the reigning and defending champions Village Manchester FC in Saturday’s cup final.

Regardless of which side comes out on top at Tolka Park, history will be made. A win for the Devils will represent the first time that an Irish team has ever lifted the GFSN Cup, whereas Village Manchester are aiming to become the first club in history to retain the cup, following a penalty shootout victory in the final last year. 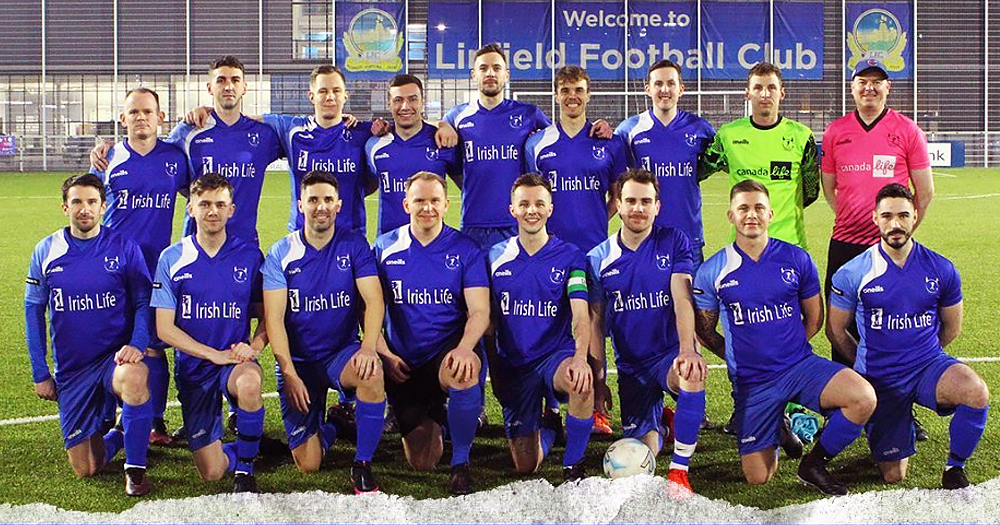 In an exclusive interview with Back Page Football, Devils’ captain Adam Kane assessed his side’s route to the final.

“We’re very happy with how we played during those games. I think we’ve gone from strength to strength with each passing game. Especially if you don’t focus solely on the scorelines because it was 4-3 in one of the matches, but we were 4-1 up and conceded two late goals right at the end. We’ve been very convincing in our wins and I’m very happy with how we’ve been building. Now heading into the final we just need to get that last win,” Kane stated.

Based in Phoenix Park, the Dublin Devils offer all football fanatics, whether they be gay, bi, transgender or straight with the opportunity to play the sport they love in a safe space for members of the LGBTQ+ community. In the words of Kane, The Devils present members of the LGBTQ+ and inclusive community with ‘’the chance to get involved with football and see that it’s not something which they have to shy away from once they hit a certain age and the dressing room becomes a bit more toxic.”

The club’s GFSN Cup squad features an eclectic group of individuals, with the age profile of the team ranging from 21 to 41. Whilst some players have lined out with various football clubs in the past, for some players the Devils offered them their first opportunity to play the beautiful game. Primarily a competition for UK clubs, the Dubliners were extended an invite to the GFSN Cup due to the fact that there is currently no comparable Irish competition due to a lack of LGBTQ+ clubs on the Emerald Isle. At present, the Cork Rebels and the Belfast Blaze are the only other established Irish clubs. Considering that the GFSN Cup only provides each club with a handful of games, the Devils usually spend the majority of their calendar year competing in winter and summer leagues as opposed to a traditional Leinster Senior League, however from September 2022 onwards the club is aiming to begin competing in an FAI affiliated league.

The Devils skipper is hopeful that Irish clubs across the country begin to follow in the footsteps of those who have helped to promote LGBTQ+ inclusivity in recent years, such as Bohemians. The Phibsborough club  currently represents the only Irish football team to boast a LGBT supporters group, exceptionally named GayBohs. In addition to this Bohs also strongly supported the LGBTQ+ community in the Marriage Equality referendum in 2015.

“Coming into Pride Month in June you’ll see a lot of clubs with a rainbowesque image above their crest, but I think it needs to be backed up with action. Like the stuff that Bohs and Shels are doing on the ground at grassroots level, getting involved and reaching out within the community… We need to see more clubs doing this,” Kane said.

Along with Bohemians, Shelbourne are one of the leading League of Ireland clubs when it comes to the promotion of LGBTQ+ inclusivity. Not only were the club happy to host the GFSN Cup at the illustrious Tolka Park, but past players from the Drumcondra-based club also compete against the Devils during Pride Month every year in an attempt to shine a light on issues faced by members of the LGBTQ+ community.

“It’s great being affiliated to Shelbourne and seeing them support us. When we reached out and told them that we were playing in this final, they were delighted to host us. Having the game in Tolka Park will definitely show people that there is a link between the League of Ireland and the LGBTQ+ community and hopefully it will inspire people from our community to not only play football, but to go to League of Ireland matches and know that there’s support in place there for them,” Kane commented.

The creation of LGBTQ+ football clubs such as the Dublin Devils allows awareness to be raised in relation to the issues that face the LGBTQ+ community both in society and in the world of football. Just last month the LGBTQ+ community in Ireland was shocked by the tragic deaths of Aidan Moffitt and Michael Snee. Following this heartbreaking news, the Dublin Devils posted a poignant message on their social media pages:

“It’s been a dark week for the LGBTQ+ community. At times like this it is more important than ever that we come together. We can’t and won’t give in to this vile hate. We’ll keep fighting for equality and safety for our community.”

The list of shameful stories in regard to homophobia in the footballing world is endless. Earlier this month, Senegalese midfielder Idrissa Gueye was absent from Paris St-Germain’s squad due to his refusal to wear a rainbow symbol in support of the LGBTQ+ community. During Euro 2020, UEFA refused a request for the Allianz Arena to be lit up in rainbow colors in support of LGBTQ+ rights. Something which could have been a simple gesture of respect and solidarity for the LGBTQ+ community, was carelessly thrown to the wayside as it was deemed as being a political message, despite clearly being a human rights message. Once again, ‘Keep politics out of football!’ screamed the offended folk who are seemingly offended by everything that doesn’t suit their agenda. Later this year, the World Cup will be held in Qatar, a country where homosexuality is illegal. These are the reasons why football needs competitions like the GFSN cup.

Despite the seemingly constant negative news stories in football, the GFSN Cup could not have come at a better time, following Jake Daniel’s announcement that he is homosexual. Becoming the UK’s first active male professional football to come out publicly as gay, the Blackpool youngster’s brave decision was met with delight by the Devils’ squad members.

“It was one of those things that as soon as the news broke on Sky Sports, it was going around every group chat and the lads were amazed. First and foremost, we couldn’t believe that he’s only 17. Like I wouldn’t have been out at 17, it was 21 for me. The fact that he’s so comfortable to come out, not just to his family and friends, but to the public right after signing a professional contract was unbelievable. We can really see it having a domino effect and hopefully it’s not as big of a deal in the future as more and more players are comfortable coming out. It was massive news to us, and he will be a great role model not just to younger players but to older players who aren’t out yet,” Kane reflected.

Supporters are encouraged to make the trip to Tolka Park on Saturday to cheer on the Devils. Entry is free of charge.