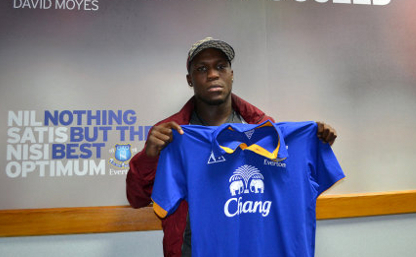 Having named just 18 out of a possible 25 players over the age of 21 in his official Premier League squad, Everton’s financial constraints were clear to see this summer as Davis Moyes was greatly limited in his transfer window dealings.

Bill Kenwright’s struggles to balance the books has seen Everton go from European regular and a challenger for Champions League spots, to many predicting a finish outside the top half. One player primed to make an impact for the Blues is Royston Drenthe, a defender/midfielder brought in on loan from Real Madrid. The Dutch international has struggled to make an impact at the Bernabeu since joining from Feyenoord, he has made just 15 league starts, and the new era of “Galacticos” has seen him pushed further down the pecking order. Last season he enjoyed a successful loan spell on the pitch at Hercules, but was suspended over a disagreement with the club’s management.

He notched 4 goals in 17 appearances for the Valencia-based side, and earned generally positive plaudits for his play, despite the Valencia-based club’s relegation. Drenthe has also impressed at international level in the past, scoring 7 goals in 24 appearances for the Netherlands U21 side, which also saw him claim the Golden Player Award in their victorious campaign at the 2007 European U21 Championships. He finally made his full debut under Bert van Marwijk in Novemeber of last year, and a loan spell in the Premier League could reignite his international chances.

At 24, the Rotterdam native is in his prime, and will want to prove himself in a new country after being left out in the cold again by Real Madrid, and anything close to the success enjoyed by compatriots Arjen Robben and Wesley Sneijder will have Toffees fans ecstatic. The English game’s frantic pace and physicality suits the versatile Drenthe, who can be played at either fullback or wing on the left side. His pace and ability to get forward means that Everton now have two dangerous fullback/winger type players, with PFA Young Player of the Year nominee Seamus Coleman quickly maturing on the right side, although the Irishman is sideline with damaged ankle ligaments for now. The ever-present Leighton Baines has been excellent in the top flight for some time, so it seems more likely Drenthe will get his chance in midfield, an area where Everton are struggling for numbers. Johnny Heitinga has been forced into a makeshift central midfielder in a partnership with Marouane Fellaini. Diniyar Bilyaletdinov has failed to make the desired impact since arriving at Goodison Park, and a spot in Moyes’s first eleven looks very likely for Drenthe.

If he is given ample time, his loan signing may prove to be a brilliant bit of business on a shoestring budget from the Scottish manager, and with Drenthe out of contract at Madrid at season’s end, Everton may also have the option of picking up a valuable player on a free transfer. If they are to lift the current negative mood among Liverpool’s blue contingent, Drenthe may play a crucial role in any success for The People’s Club this season.

One thought on “Drenthe poised for breakthrough at Everton”