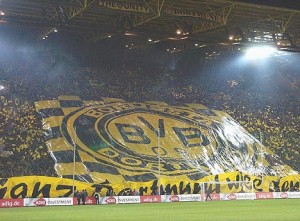 Average gates touching 75,000, an exciting young squad and a gifted gaffer – not to mention a rich recent history. On paper, Borussia Dortmund should be an ever-present regular at the forefront of the Bundesliga. On turf, however, that has too rarely proved the case since the halcyon days of the mid-90s, when Sämmer, Riedle, Möller and co bestrode the domestic and European scenes with swagger and style in equal measure.

It is, of course, early days in the Bundesliga season, but Friday night’s clash of north-west giants between Dortmund and Köln offered Die Borussen a particularly juicy carrot, which had been dangling tantalisingly since before the international break. Register a win at Köln’s poetically-monikered RheinEnergieStadion and Dortmund would return to the top of the table for the first time since May 2002 – the last time they took the title.

Having already claimed three away wins on the spin, Jürgen Klopp’s side were clearly confident as they pinned the perennially struggling home team in their own half for much of the opening 45 minutes. An overdue first goal, finished somewhat fortuitously by ‘Kuba’ Błaszczykowski, owed much to the consistently impressive architecture of Shinji Nagawa. The wonderfully gifted Japanese midfielder, strangely omitted from World Cup duty this summer, sent across one in a series of precision balls to find Lucas Barrios; the striker’s effort rebounding off post and defender before finding Błaszczykowski’s conveniently-situated knee just inches from the line.

The extent of the high-flying visitors’ dominance was highlighted by the regular arrival of defenders Neven Subotić and Mats Hummels in and around the Köln penalty area. As the side he was surprisingly repatriated to last year scrambled desperately to plug the numerous gaps in their leaking defences, home-town anti-hero Lukas Podolski scowled his way through the game, making one or two too many careless passes and clumsy touches for a man named MOTM with the Nationalmannschaft in midweek.

Since the Polish-born forward’s return to the club, his performances for country and club have contrasted like night and day. Coach Zvonimir Soldo’s stolid tactical approach and the team’s persistent struggles, allied to Poldi’s questionable work-ethic, have left a player who can be simply unplayable when at the peak of his considerable powers too often looking like a pale shadow of his former self at domestic level. Sporadically, though, that hammer-like left foot of his can still deliver a thunderous blow. 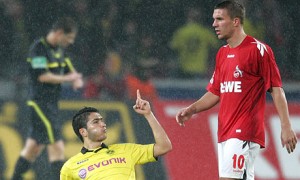 That was the case when, deep into the second half, Podolski thumped in a classic thunderbolt from 25 yards; a wonder-goal to rank among his very best. Not surprisingly, an otherwise sullen Poldi suddenly became animated; beaming from ear to ear as he pounded his chest and performed the ritual badge-smooching that such magical moments habitually require. The smile wouldn’t last all that long, though.

First, there was a spiteful clash with Dortmund’s midfield maestro Nuri Şahin following a blatant and unnecessary foul on the Turkish playmaker. In stark contrast to Podolski, Şahin was born in Germany but instead chose to represent the nation of his ancestors. There was clearly residual bad blood between the hot-headed pair in the aftermath of last week’s 3-0 victory for Germany over the Turkish in Berlin.

Needing to be separated from Şahin by the referee as the two traded insults and went toe-to-toe, Podolski brattishly held up three fingers to indicate the margin of the Germans’ recent victory. As he smirked, Şahin went to work.

Within minutes, the Dortmunders snatched a much-deserved victory through Şahin’s deflected close-range shot, following a move which owed much to the endeavour of sub striker Robert Lewandowski. Naturally, the Turkish tyke celebrated by sprinting straight at Podolski and sliding under his adversary’s nose with a victorious finger held aloft. Somehow he escaped without a kick up the bum.

For Dortmund, the dramatic nature of their success only served to further sweeten the feeling of returning to the Bundesliga pinnacle after such an extended period of absence. It could well be a fleeting taste of supremacy, as Thomas Tuchel’s surprise-package Mainz still had the opportunity to return to the summit by the close of play this weekend. However, Paolo Guerrero’s late strike for Hamburg consigned Mainz to their first league defeat of the season on Saturday evening, leaving Dortmund definitely top-of-the-heap heading into round nine.

It’s surely an indicator that Klopp’s programme of steady improvement is finally due to pay dividends this term. Certainly, a charge for a Champions League spot should not be beyond the means of this group – particularly given the sluggish starts of fellow contenders such as Bayern, Werder Bremen, manager-less Stuttgart (following the premature sacking of last year’s saviour Christian Gross) and Schalke.

Bargain buy Kagawa, prolific hit-man Barrios, stocky winger Błaszczykowski, allied to such prodigious midfield talents as Şahin, Sven Bender, Kevin Groβkreutz and der neue Deutsche wunderkind Mario Götze, and a talented central defensive pairing in Hummels and Subotić, backed-up by experienced ‘keeper/stand-in skipper Roman Weidenfeller. It’s a potent combination, and one which can deliver some overdue success to one of Europe’s most passionately-supported clubs sooner rather than later.