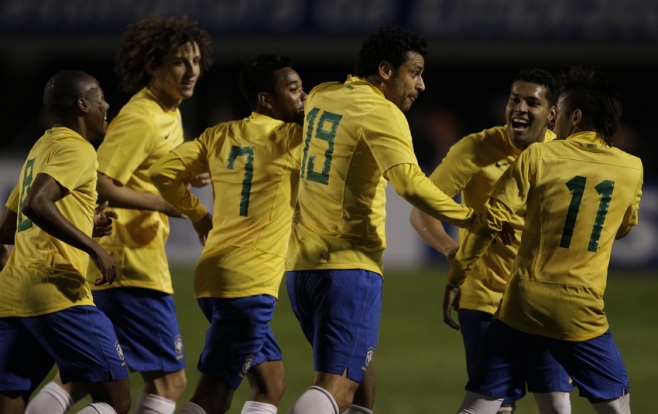 It took three games for Brazil to finally come alive in the Copa America. Wednesday night’s 4-2 victory over Ecuador saw the Seleção top Group B and reach the quarterfinals, but Brazil’s Copa campaign has been far from easy. Drab draws with Venezuela and Paraguay had left qualification hanging in the balance, and it is with relief rather than excitement that Brazil will progress to the next round.

Their problems are well-documented. Prior to Wednesday’s victory, Brazil had won just two of their last seven games (friendlies against Scotland and Romania), scoring a paltry five goals in the process. Beating Ecuador will put wind in Brazil’s sails, but the result owed as much to La Tri’s lackadaisical as it did the Seleção’s endeavour. The men in yellow are improving incrementally with every game, but this side is still very much a work-in-progress.

The first thing coach Mano Menezes’ promised upon his appoint last year was to end the unpopular pragmatic football favoured by previous coach Dunga. Brazil would move back towards a traditionally fluid attacking style of play, but there has been little evidence of this thus far. Menezes may have tinkered with different personnel and formations but the football, while far from turgid, has remained remarkably un-Brazilian since he took over.

Sections of the Brazilian support are already losing patience with Menezes. As clichéd as it sounds, Brazilians expect not just to win, but to win with style. Dunga may have won the 2007 Copa America and the 2009 Confederations Cup, but he was one of the least popular men in Brazil by the end of his reign. Menezes would do well to learn from his example.

The Brazil of 2011 lack cohesion, and Menezes’ methods are grating. Thus far he’s failed to stamp his authority on a group of players still struggling to escape the Dunga era’s tactical shackles. This Seleção incarnation attack without any clear direction, focus or purpose. Fluidity comes only in short, staccato bursts and their attacking play lacks any sort of rhythm. Brazil are a rudderless ship going forward, and they’re often a shambles at the back.

Individual failures aside, most of these problems stem from the coach. The way Brazil are playing suggests that Menezes lacks a clear game-plan. Known as a conservative tactician from his Gremio and Corinthians days, Menezes seemingly lacks the acumen to work with such a talented group of attackers. Unable to construct an effective, fluid plan of attack, Menezes throws his team together hoping that the abilities of certain outstanding individuals alone will carry them to victory. It is the footballing equivalent of randomly selecting 11 of the finest ingredients known to man, throwing them in a pot and expecting the resulting stew to be delicious.

But it’s not all doom and gloom. Brazil were poor against a Venezuela, but signs of the old Seleção are slowly reappearing. Both goals against Paraguay were well-taken, and Ganso is slowly growing into his role as the side’s chief creator. Ecuador’s lack of pressing played into Brazil’s hands on Wednesday, but the Seleção still produced their best performance of the Copa America thus far. Neymar finally produced a performance to justify the hype, mirroring strike partner Pato by scoring a brace.

Defeating such a lacklustre Ecuador side isn’t going to get Brazilian pulses racing but the result is a definite sign of progress. As haphazard as his approach looks, Menezes appears to be finally striking a balance. Defensive frailties still exist (evident by the amount of space offered to Felipe Caicedo) but Maicon was outstanding in Alves’ place and Brazil attacked more purposefully than before. If Menezes can forge his astonishingly talented group of attackers into a well-oiled unit then Brazil could yet win the tournament.

Not that Menezes will be losing too much sleep over potentially failing to win the Copa. This, after all, is a country more focused on building for the 2014 World Cup than the 2011 Copa America. Brazilian eyes are already on hosting the world’s biggest sporting event, and they have plenty of reasons to look forward to 2014 with optimism despite their recent woes.

A popular criticism of the current Brazil squad is that they lack an obvious figurehead. In literal terms, this is true. There are few obvious “superstars” in the current XI, but at this stage does it really matter that Brazil lack a Rivaldo, a Ronaldo or even a Kaka? Between now and 2014 there is plenty of time for one of Brazil’s players to grow into the talisman role, and the Seleção aren’t exactly short of candidates.

There is plenty of potential in this team. Provided his career trajectory remains stable, Neymar should be one of the best players in the world by 2014. As poor as he was in the first two games, the 19 year-old is one of the world’s most sought-after players and his talents need no introduction. He can be selfish at times but Neymar is finally finding his Copa feet after a sterling performance against Ecuador. Blessed with all the potential in the world, the growth of Neymar’s teamwork attributes will be vital to Brazil’s success over the next decade.

Paulo Henrique Ganso, like Neymar, has grown in stature as the Copa has progressed. Coming straight into the side after eight months’ worth of bad injuries was never going be to be easy, and Menezes’ early reliance on Ganso as the team’s sole playmaker didn’t exactly help matters. Too much pressure was put on the midfielder’s shoulders from day one, but he’s starting to show the form that’s attracted interest from the likes of AC Milan. 2010’s Campeonato Brasileiro Breakthrough Player of the Year could follow Neymar out of Santos this summer and his creative brilliance will only grow as his career progresses.

It doesn’t end with Neymar and Ganso. Sao Paulo’s 18 year-old Lucas Moura is a gifted attacking attacking midfielder who has already made four appearances for the Seleção. One of country’s hottest prospects, the idea of Lucas forming part of Brazil’s creative unit with Neymar and Ganso in 2014 is mouth-watering. At the other end of the attacking spectrum, Internacional’s Leandro Damião is a bullish centre-forward who could provide the focal point Brazil have lacked since Luis Fabiano’s international exile. His rough-edged skillset needs polishing, but experience could make him the perfect player to add a finishing touch to his teammates’ brushstrokes.

Much has been made of Brazil’s apparent “decline”: this isn’t a team in-crisis but one in-transition. There is enough potential in the Brazil squad to ensure that they’ll be just fine by the time 2014 comes, and the likes of Neymar definitely have the ability to resurrect the fluid, attacking style that Brazilian fans crave. If the young players can gel with Pato, Robinho and the rest of their team-mates then the Seleção will once again be one of the most exciting teams in the world.

It would be criminal not to mention Brazil’s defensive players despite the mistakes they’ve made recently. Lucas Leiva is coming off a career-best season at Liverpool and should be Brazil’s first-choice holding midfielder for years to come. Alongside him is Ramires, who isn’t the most technically proficient player but is an excellent ball carrier. The Chelsea acts as Brazil’s “shuttler,” and gives the side some balance in the middle of the park.

Brazil’s defence, like it’s attack, clearly needs some time to gel, but Thiago Silva became one of the best centre-backs in the world last season and David Luiz is also on the ascent. Lucio is getting long in the tooth, but the Seleção’s captain is a strong leader and still offers something on the pitch. In Maicon and Dani Alves Brazil are blessed with two truly world-class right-backs, while Andre Santos is steadily improving on the left.

The components of Brazil’s recovery are already there; all they need is someone to put them together. Whether Mano Menezes is that man remains to be seen. The Ecuador result is a step forward, but his squad’s lack of cohesion will not improve without a concrete game-plan. Brazil’s talented individuals cannot mould themselves into a fluid unit without the guidance of an attack-minded coach.

The Seleção have everything in-place to be world football’s dominant force again, but it might just take a change of manager to get there.

2 thoughts on “Dormant Brazil side are finally waking up”