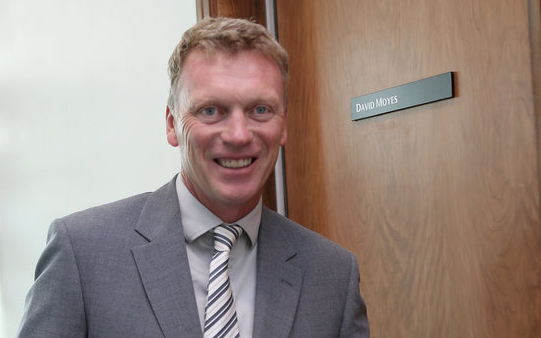 David Moyes was named as the successor to Sir Alex Ferguson on the 9th May 2013. Since that fateful day Moyes’ life in Manchester has been, to say the least, difficult. At the time of writing, the Red Devils flounder stagnant in uncharted territory; mid table, eighteen points from the relegation zone, fifteen points from the familiar first place.

This all makes for bleak reading, evoking sympathy for the man at the helm from even the most ardent City fans. However, I wholly believe that the Scotsman is not to blame for the Reds’ slump: such a notion is the easy answer for fervent, success-seeking Manchester United fans. I opine that we should deviate from the generic option of blaming the manager and look a little deeper.

The first direction heads should turn is towards the playing staff of Manchester United, the nonchalant, inconsistent, passionless playing staff. For the entire season, players so often relied upon under Fergie have underperformed. This is probably due to the fact that Sir Alex Ferguson could inspire greatness from the average, read: Antonio Valencia. However, such an idea that alludes to the argument that Moyes is to blame.

No, Moyes is not to blame because Moyes can never replicate the motivational prowess of his predecessor, nor was he ever expected to: Moyes’ role was to conduct a steady tenure as manager of Manchester United in the wake of the resignation of the unmatchable, steadying the ship and rebuilding the team. Thus, Moyes’ players are to blame, yes, the players that won the title last term, yes, the players that featured four times in the Premier League’s Team of the Season during Fergie’s final year and yes, the players that won 28 of their 38 games last season.

The players are culpable. I acknowledge that it is somewhat of a cliché, but they are the people on the pitch every week. Take United’s latest underwhelming display, against the uninspired, toothless, bottom-of-the-table Fulham. Records were broken for the number of crosses the players delivered, though United did not score directly from a cross: alas, the penny did not drop. Over 40 balls were swung in by the likes of Young and Mata in the first half; each defended with relative ease. Did they steer away their “conference” style football, as Dan Burn described it, and begin to probe the heart of the Fulham defence? In short; no.

Inconsistency oozes from every playing department. Welbeck can divert a ball into the net with his back to goal, yet miss from eight yards out with the goal at his mercy. Nani can mesmerise and torment defenders for one game, before proceeding to disappoint with a dearth of genuine quality for the next ten. Jonny Evans can astonish with his defence talents, only to shrink away at the prospect of physical battle. David De Gea, at times, personifies the modern goalkeeper with his reflexes, agility and distribution; conversely, the Spaniard all too often resembles a frightened rabbit, struggling under the unbearable weight of the number one jersey.

Matters in Old Trafford were compounded as Anderson fulfilled the role of fractious reject, exposing information of want-away former teammates, namely Nemanja Vidic, Nani and the ageing Ryan Giggs. Anderson’s words appositely reflect the nature of United’s changing room under Moyes (not because of Moyes). The players are unwilling to toil for Moyes as they did for Sir Alex; Fergie-time urgency has become mundane Moysie-minutes. Such a disenchanted dressing room exists because the players lack the passion Fergie once instilled.

This, however, is not because Moyes is inept or an incompetent motivator, on the contrary, he inspired Everton to overachievement so consistently that it became merely achievement.

The players are the people fulfilling the dreams of the billions every day, representing the club that once dominated the stock market, the club that millions support and even more resent because of their uncontainable brilliance.

Every week the over-paid, overrated and overconfident players trot out onto the pitch, not full of boyish excitement of exuberance, but drenched in apathy and indifference. Moyes can only do so much; the players should be the people accountable for the mess Manchester United find themselves in.

What’s more, sacking Moyes will not help; it will simply compound the problems, flinging United into the immoral world of managerial redundancy after every defeat, the realms of depravity that most top flight clubs now exist in. Such an act would defy the values and beliefs of Manchester United, a club so steeped in tradition and integrity.

In conclusion, I believe that Moyes should be, to a certain extent, absolved of blame, while the players should be more accountable and more proactive in reversing the clubs fortunes. The managerial role at Manchester United Football Club is one even Football Manager players would shirk. It is the ultimate poison chalice: the shoes that no man could fill. Though, if anyone is apt to slip their feet into such cavernous shoes, it is David Moyes.

Moreover, if Moyes can emerge proud and admired from his incumbency at Old Trafford, the players are the people who must support him. I fundamentally agree with those that defend David Moyes; ultimately, he is not the culprit, he is the victim.