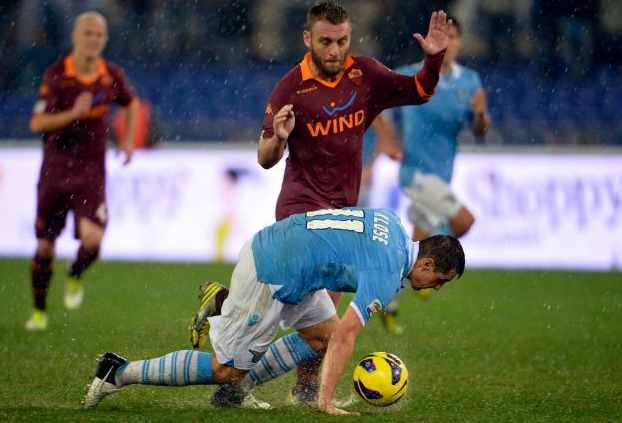 Ahead of the Rome derby, some suggested this game could prove a watershed moment for Zdenek Zeman and his Giallorossi charges. What followed was a bruising defeat to city rivals Lazio that induced a decidedly dark mood amongst Romanisti, fittingly mirrored by the rain that poured from Rome’s leadened skies. And in the calm that follows the storm, one questions if a silver lining can be found amongst a cloud poised to loom over Roma for a while yet.

Like many Roma games, it all started so well. Barely minutes into the derby, with the Stadio Olimpico floodlights ebbing in and out of consciousness, Francesco Totti’s corner was met by the form-horse Erik Lamela whose header gave Federico Marchetti little chance of saving. Roma’s ‘Curva Sud’ lit up and a wave of belief billowed through the sea of Giallorosso – Could this finally be the end of Lazio’s derby stranglehold?
As the first-half wore on, Roma uncharacteristically for this Zeman incarnation, retreated, allowing Lazio ample possession in their final third. With the Olimpico pitch becoming increasingly waterlogged, errors started to permeate the game and with Roma conceding territorial advantage, the likelihood was that any mistake would favour Lazio. Eventually, almost with a sense of inevitability, Biancocelesti pressure paid dividends as Antonio Candreva restored parity.
For Roma’s tifosi, Candreva’s strike proved especially cruel considering that the native Roman grew up as, of all things, a Roma supporter – a fact that inevitably invited harsh treatment from Lazio’s ultras during Candreva’s early days in the blue. Needless to say, Candreva’s equalizer would serve to render such loyalties void and all was left was for fellow Roman, Daniele De Rossi, to gild a what was to prove a sensational half for Lazio.
As the first-half drew to a close, Lazio’s prolific German forward Miroslav Klose used striker’s instinct to find space amongst Roma’s inexperienced central defence, slotting home to create a familiar dynamic for Roma’s tifosi, Serie A’s most prolific squanderers. And what followed however, was yet another groundhog moment for Roma as ‘capitano futuro‘, Daniele De Rossi needlessly raised his hands to Stefano Mauri in a largely innocuous tussle, giving the referee no alternative but to dismiss the Roma midfielder.
So again, Roma had surrendered an advantage and De Rossi had failed to learn from past transgressions – facts which would have doubly frustrated Zeman who in trying to guard against defeat, gave De Rossi a pep-talk specifically about restraint prior to the game – understanding, as all Romanisti do, that the red mist can easily envelope the man who many suggest will inherit Totti’s armband, should he remain in Rome of course.
As Stefano Mauri played a pivotal part in the first-half denouement, the Lazio midfielder made unequivocally sure of his contribution with an immediate second-half goal on 46-minutes. Before Roma could settle Lazio’s lead was suddenly a comfortable two goals and upon an increasingly sodden and heavy pitch, Roma were left to thanklessly try to claw back a sizable deficit with ten men.
The deluge continued unabated and drops tumbled from the brim of Vladimir Petkovic’s baseball cap, the Lazio coach standing passively on the sideline, presiding over a Lazio side who for the most part, limited Roma to a succession of set-pieces and speculative efforts. Meanwhile, a pensive Zdenek Zeman remained in the sanctuary of the dugout, trying to fathom a way of exerting some influence on the game, and somewhat belatedly, a decision to bring on Miralem Pjanic did precisely that.
The fresh legs of Pjanic immediately wreaked havoc amongst Lazio’s rearguard and with game heading into the final phase, Stefano Mauri of all people contrived to earn himself a second yellow, affording Roma a glimmer of hope amid the afternoon gloom – a glimmer that morphed into a broad shaft of light thanks to Pjanic’s freekick on 86-minutes. Suddenly, with ten against ten, the once insurmountable appeared, with this momentum shift, eminently doable. 3-2 and maybe game on?
Thankfully for Lazio it was not to be as time ran out on Roma’s revival, a third successive derby was deservedly Lazio’s. Through a combination of defensive inexperience and ill discipline Roma had forfeited another winning position, and as with all Rome derbies, success, defeat and deficiencies are magnified with unparalleled intensity. For Lazio, fresh from a Europa Cup thrashing of Panathinaikos, the derby victory helped restore a sense of belief nearly lost after the recent visit to Catania. Conversely for Roma, it was history repeating and the game ended with more questions than answers.
In the wake of Sunday’s defeat the future of Daniele De Rossi will undoubtedly be questioned. Can Daniele rebound from this latest indiscretion when Roma have already conceded a willingness to entertain interest from other clubs? De Rossi has sometimes found life in Rome uneasy and one wonders if this latest episode could be the metaphorical final straw for all parties. As for Zeman, is he capable of shoring up Roma’s porous back-four? At some point will he concede that attack is not always the best form of defence?
So far, subsequent soundbites from Zeman have revolved around an absence of luck and Sunday’s weather. In public at least, the Czech tactician has failed to address the nub of Roma’s issues – namely an unnerving level of profligacy, and one must wonder if Zeman is in denial and really does believe that his tactics will bring a degree of consistency needed for a scudetto chase. Meanwhile, we learn that Daniele De Rossi has apologised to Mauri for the red-card incident, but strangely, for a player synonymous with untimely sending offs, there is no sign of an apology to Roma’s tifosi, let down at the most inopportune moment.
Next up for an invigorated Lazio is a trip to league leaders Juventus, meanwhile Roma are presented with a chance of redemption when newly promoted Torino visit. Interestingly, the pressure will be off Lazio thanks to the derby win, but for Roma, facing an opponent that is beatable ‘on paper’ could be a blessing or a curse – and as its Roma, there is no way of saying which one.