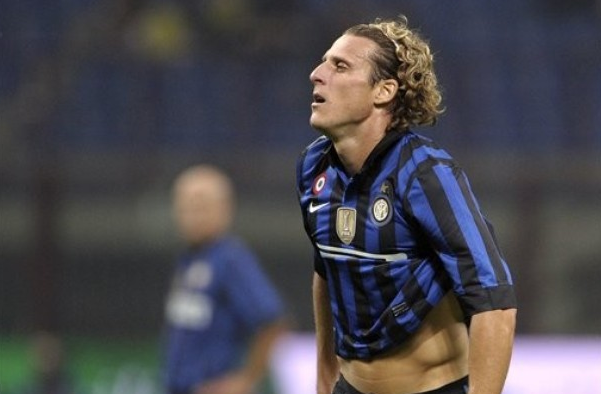 A goal machine. Every club wants one; some are lucky enough to already possess one. But Internazionale crave one, despite having one amidst their ranks. A cult hero in Manchester, and a fans’ favourite in Madrid, Uruguayan Diego Forlan just isn’t cutting the mustard in Milan.

The 32 year-old made an estimated €5m move to Inter in the summer, following the big-money €28m move of Samuel Eto’o to Anzhi Makhachkala. Rumours had been around for months beforehand of a potential move, with new coach Gian Piero Gasperini supposedly a big fan of Forlan. However, plenty has gone against him thus far this season.

Inter themselves have had a pretty poor season. Up until the end of November, they had spent twelve of thirteen match rounds in the bottom half of the table. A swift coaching change brought mixed fortunes – winning eight out of nine consecutive matches, propelling them towards the top of the table. However, they are now yet to win in seven games, taking two points from a possible twenty-one. The highlight of the season so far was a derby game win against AC Milan, winning 1-0 in the away fixture at the San Siro.

Their chosen strike force pairing of Gabriel Milito and Giampaolo Pazzini have scored 18 league goals between them – just over half of the total goals Inter have scored this season in Serie A. After 25 games last season – the same stage Serie A is at at this point in time – two players had each scored eighteen goals or more; Goran Pandev (18) and Samuel Eto’o (22).

Forlan was, in essence, signed as back-up – with Eto’o, Pandev and David Suazo all gone, an experienced forward was needed to plug a hole in the squad. Coach Claudio Ranieri is coming under fire for poor domestic performances, and rumour has it sacked Chelsea boss Andre Villas-Boas is already being lined up by the powers that be to replace the Italian in the summer. Hardly an endorsement that he is doing a grand job.

Ranieri needs to stick to what Inter know, and that’s a standard 4-4-2, with a diamond midfield. And Forlan fits the bill for that.

His strikers aren’t playing well in the slightest, so why not shake things up and change it around? With the likes of Forlan and on-loan Mauro Zarate sitting there, there is an option for change. Admittedly, both have made upwards of ten appearances in the league, but is it enough to keep Inter up there with the other big teams in Italy? A current seventh placed position will please no-one, and Ranieri will very quickly be shown the door.

Diego Forlan ran the show in Spain when asked to play as a centre forward with a decent supply behind him. Arguably, Inter have a better squad than that of Atlético and Villarreal in years gone by, and therefore Forlan should be even better this time around. Either way, Ranieri has to make some quick changes to make sure the Champions of Italy remain there or thereabouts this season.