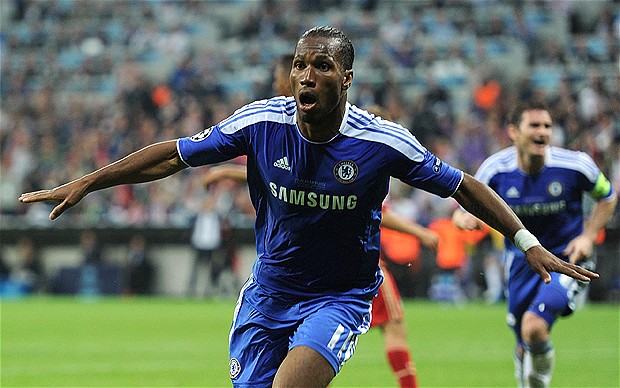 It’s a pretty safe statement to make that Chelsea have had one of the busier and more progressive transfer windows this summer, this is despite losing some big names and personalities from their dressing room.

The arrivals of Diego Costa, Cesc Fabregas and Filipe Luis have been well documented, as has the return of Romelu Lukaku and goalkeeping giant Thibaut Courtois. Their respective roles in helping Chelsea to mount a serious challenge for domestic and continental glory have been discussed almost to death by pundits and supporters around the world.

However, there has been another signing that many seem to be overlooking the significance of. The decision to bring Didier Drogba to the club was greeted by many with shock and confusion. While many outside the club seemed a bit perplexed by the move, with some doubting his ability to perform at a top level, Chelsea fans – for the most part – jumped for joy at their Munich hero returning to the place they consider to be his home.

The significance of Drogba returning to Stamford Bridge should not be underestimated, and there is a real argument to be made that bringing the Ivorian back to the Bridge is the best business the Blues have done all summer.

As previously mentioned, the dressing room has seen the departure of a few big personalities this summer, namely, Frank Lampard, Ashley Cole and even David Luiz. Jose Mourinho had a massive task in trying to replace these characters and their influence on their teammates with someone who shares the same drive, and desire to win as he does.

The 36-year-old has worked under Mourinho before and achieved great things. Their relationship was so good that the dismissal of Mourinho in 2007 looked for a while that it would prompt the striker to leave the club.

Speaking after Drogba returned, Mourinho summed up his impact on the squad by saying “Didier was always present, even when he wasn’t.” The fact that his presence is felt even in his absence will be a major contributing factor to any success Chelsea are to have this season. There will be many occasions this season when he may not be present on the pitch, or even on the bench, but his presence will still be felt.

That distinguished spine of the team from Mourinho’s first reign in West London is not as decimated as it once seemed. Consisting then of Petr Cech, John Terry, Frank Lampard and Didier Drogba, it seems that this season’s starting eleven might only hold one of these players in the form of club captain Terry. Now, however, with the off-field help of Drogba and Cech, the transition from the previous era to the new generation should be smoother for Mourinho.

Forgetting squad harmony and whatnot momentarily, it’s worth remembering that Drogba himself had difficulties in settling in the Premier League when he arrived, this could prove to be endlessly helpful to Diego Costa should his transition from La Liga to the Premier League not be as straight forward as expected.

There is one man at Chelsea who is reportedly not enjoying his time too much. The person in question is Romelu Lukaku. The Belgian forward has returned to Stamford Bridge after two successful seasons on loan elsewhere in England, most recently at Everton. It’s no secret that he wants first team football and will have to earn his place in the team if he is to keep €30 million Costa out of the side. Lukaku is forever being compared to Drogba, so having the latter at the same club as him is unquestionably going to help his development as a Chelsea player should he chose to stay.

Whether or not Lukaku stays, Chelsea surely have a strong and deep enough squad to compete for silverware on all fronts this coming season and it will be fascinating to reflect, come May, and see how this new assortment of players got on under the guidance of the self-proclaimed Special One.