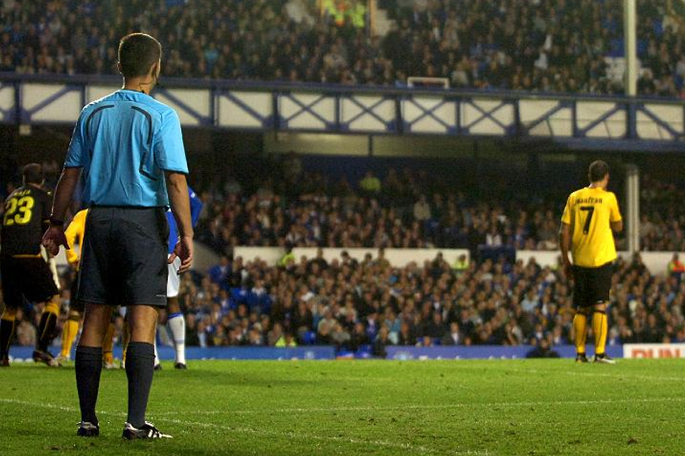 During Manchester United’s Champions League match against Braga, something amazing happened.  The fifth official, you know, that guy who stands behind the goal and doesn’t really do anything, well, he did something.  He gave a penalty.  And from toiling to even get a point, United ran out comfortable winners.  So what better time to learn a little more about that most misunderstood of officials than now?

Move over the Secret Footballer!  There’s a new anonymous insider in town.

Have you ever wondered what it’s like to be the man behind the goal?  Or what goes through his head the moment before he doesn’t make a match-defining decision?  Prepare to have these questions and more answered in an exclusive, one-off extract from the book that reveals the truth behind football’s most mysterious figure.

Welcome to the diary of a fifth official.

I wake up on the morning of my first match sick to my stomach.  I try to recall my training but everything’s a blur.  I think back to what Mr Blatter said the day we qualified, but it all sounds like nonsense now.  Come to think of it, it sounded like nonsense then, too.

I read my Scenario Manual and remind myself what to do at corners, throw-ins, free kicks, goal kicks, and in open play.  There are a surprising number of ways to say “nothing”.

Then I work out.

During training we did this in a dance studio, a huge mirror reflecting our eager faces back at us.  But now I do it in front of the bathroom cabinet.  When my wife’s out, I practise in front of her full-length mirror in the bedroom.  She’s not out as much as I’d like.

During training, this is when the drop-outs started.  Some people aren’t good at doing nothing.

They were reassigned to referee or assistant referee classes.

The ones who were really good at doing nothing – they were fast-tracked to the FA.

My work-out over, I try to eat something but still feel nauseous.  Instead I make a packed lunch to eat during the game.

When I arrive at the ground, the first-to-fourth officials talk loudly in their changing room, but when I knock they fall silent, change swiftly and leave.

Time passes quickly prior to kick-off.  This is a gift.  For fifth and sixth officials, boredom isn’t a trait to mention on your CV; far better to say daydreamer.

Other reasons not to apply include: If you say “ahhhh” when you sit in a comfy chair after a bit of standing up, if you feel the cold, or if you want to make a difference.

I take my position behind the goal line and the whistle blows.

The game is one-sided.  No attacking phases towards my goal, no throw-ins within forty yards of me, no corners or decisions to be made.

I briefly wonder if fifth official was the right career choice. I applied after those quotes from Platini during Euro 2012, that fifth officials were good for the game.

But shortly after completing my training, I heard whispers of new opportunities: seventh-to-tenth officials; one to be placed in each stand nearest the most vocal supporter – or “Stand Ambassador” as they would be renamed.  These new officials would explain the referee’s decisions and this would be filtered to the whole stand.

But these would be people-people and I’m not a people-person.

I’m watching the ball come towards me for the first time all game, taking the action pose, my hands on my thighs.  To the casual observer, there are decisions in this stance.

The ball goes behind for a corner.  Should it drift out of play, I will look at the assistant referee and agree with him. Should the ball go only partly over the line, I will wait for the referee to decide and copy.  But it doesn’t so I don’t.

Nothing happens in between.

My next game would prove to be quite different.  Luckily, I was looking the other way.

©Exclusive extract from Diary of a Fifth Official.

Available in no good bookshops…and no crap ones either