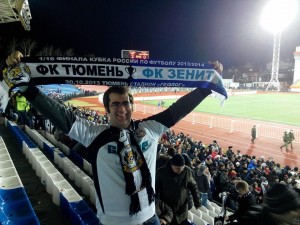 I cannot for the life of me imagine why anyone would not be interested in a semi-professional lower league side from Siberia. OK, I maybe I can. But you all should be. I am almost certainly a little biased, but that might have something to do with the fact that the nearest team is further than Leeds to London.

Welcome to the world of FK Tyumen. I must be honest, we are no longer semi professional. But this is a side that has gone from Premier League contenders, to not even having a senior team, yet alone a full-time one, and halfway back again in 16 years. Did I mention that we beat Zenit St Petersburg? We Are More Than Arshavin (shameless plug for a great English language blog on Russian football).

In this series of monthly diaries, I will try to draw you into my world of following a giant-killing, preconception-shattering, mind-boggling side with big plans. Some of you will no doubt recognise themes from supporting other lesser lights, but have you ever done it from a place where the temperature ranges from minus 40 degrees celsius to plus 40?

By anybody’s standards, seven points from four matches in a new division with a new squad of only 18 players is a success. Throw in the Futbolnaya Nazionalnaya Liga (FNL)’s top scorer in the shape of minute maestro Lado (you try saying his full name, Vladimir Gogberashvili, after a pint or two) and manager Konstantin Galkin can be mightily pleased with himself.

However, it has not all been plain sailing. The crazy ‘pre-season’ lasted a mere six weeks, during which time quality players such as defensive lynchpin Yuriy Morozov and the conductor Mikhail Pimenov have left the club, not to mention two of the three strikers from last season. Only one striker has been added to the squad in Tyumen old boy Dmitry Zarva, and the classy playmaker role vacated by previous captain Pimenov is yet to be filled.

Then there was the thumping 1-4 thrashing handed out by Gazovik Orenburg in the first home match of the season. It wasn’t so much the scoreline, bad as it was, that was depressing. It was the ease with which Gazovik calmly and coolly picked us off, like an experienced older brother who almost has his mind elsewhere while his sibling struggles in vain. Vadim Afonin, a tall Thomas Gravesen without the bulging eyes, was imperious.

Clearly, this division is an entirely different proposition to the regional third-tier Ural Povolzhe league. Imagine jumping from the Skrill Premier to League One. It may have been dispiriting to watch as a season of building towards a fluid, attacking side seemingly crumbled in 90 sodden minutes, but better to receive the wake up call early and learn harsh lessons than create unrealistic ambitions before we are prepared.

The modern game has spawned the 4-2-3-1 formation which Galkin has intelligently moulded his players into. With the surplus of ball-playing midfielders in Tyumen’s squad, and the lack of numbers in the forwards department, it has made sense to allow enough flexibility to accomodate the players available.

The results of this tactical approach have been overall very promosing. Belarus international Andrey Chukhlei looks to be a talented but hard-working winger in the mould of Dirk Kuyt, which could complement the mercurial genius of Lado well, and he fits into the wide berth without sacrificing solidity in the middle, provided by the ‘double pivot’ of Mikhail Kanaev and Danil Klenkin.

A word on Lado: every club has one, a talisman that identifies with the support instantly, and he is ours. A pint-sized hybrid of Georgi Kinkladze’s ball skills, and Temuri Ketsbaia’s speed and aggression (remember that poor advertising board at St James’ Park?), he rarely completes a full hour on the pitch. The guy is only 167cm tall after all. Never mind that though; he always produces that sublime moment that takes your breath away, and we love him.

An unbeaten record away from home does not happen by accident. OK, so it has only been two games, but in both games Tyumen totally dominated proceedings, bar a 15 minute period during the 2-2 draw with Volga. Sergey Danilov’s late winner in the 0-1 win against Dynamo St Petersburg in the shadow of Zenit’s Petrovsky Stadium was no fluke; Dynamo blinked first. The comfort on the ball that the majority of the first team have is a major factor in this success.

One issue that Galkin is faced with is what to do with his twin towers up front. Khasan Mamtov is irreplaceable in the system; not just as captain, but with his positional sense and hold up play. His intelligence makes the whole system tick. But how can he ignore the obvious goalscoring threat of last season’s top scorer from our old division? Will he rotate them? Unlikely, given Mamtov’s status at the club. Will he simply leave Zarva as a substitute? Possibly, but it is unlikely the big man would be happy with this for long. Will he play them both? Awkward, as this means moving Mamtov out of position, and dropping Chukhlei (very harsh after one start) or Lado (heresy).

Despite an uneven but largely uneventful 2-0 win last time out against Yenisey Krasnoyarsk, there are still lessons to be learnt that will come as our experience grows. Let’s enjoy what we can for now; a promising start to the season, a quietly confident manager who is shaping an entertaining side, and 65 kilos of pure Georgian magic.