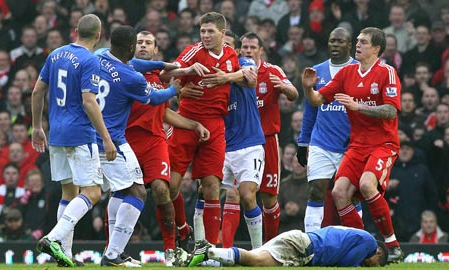 This Sunday at Goodison Park, Everton will welcome their oldest and fiercest rivals Liverpool for the first Merseyside derby of the season. The white hot fixture, which back in the 1980’s would have often determined the destiny of major trophies, has become something of a sideshow to the main event, especially as it serves as the warm up act to the Chelsea vs Manchester United showdown later the same day. But for Scousers this is all that matters this weekend.

The game will not only serve as an indicator as to the progress made in the early days of the Brendan Rodgers era, but also the growth shown by the new, more expansive Everton that David Moyes has sent out this season. The outcome should also go a long way to shaping the rest of the campaign for both managers.

Liverpool have had a difficult start to the season having already faced both Manchester clubs, Arsenal, in form West Brom and several games in the Europa League. Performances and results have been up and down as they search for the consistency to push further up the league table. A win at the home of their neighbours would provide much needed impetus to the Rodgers Revolution as we head into the winter.

Everton have begun their league schedule in the same form as they finished the last one with impressive results and fine performances. The games against Manchester United, Swansea and Aston Villa showed the Toffees in their best light to date but the last two draws at Wigan and QPR have seen Moyes’ men struggle to earn a share of the points. Victory over the old enemy would keep the wheels rolling along nicely for the Blues as they aim to maintain their position amongst the early pacesetters.

Evertonians will be hoping for better fortunes than last season against the men from across Stanley Park. In the three match-ups between the two, Liverpool came out on top on every occasion. In the Goodison derby, Everton’s gameplan was served a fatal blow early on when Jack Rodwell was wrongly sent off for a perfectly executed tackle on Luis Suarez, whose overreaction undoubtedly contributed to the young midfielder’s dismissal. The return clash at Anfield proved a one sided affair where the headlines were made by a Steven Gerrard hat-trick and David Moyes’ controversial decision to play a weakened starting XI to save his best line-up for the FA Cup Quarter Final against Sunderland four days later. This infuriated the Everton fans who saw this as a huge miscalculation on the part of the manager who took his side into the game in much better form than their opponents and more than capable of achieving their first win in front of the Kop since 1999.

The final part of the trilogy was played out on neutral territory as the two Merseyside giants met in the FA Cup Semi Final at Wembley. Once again the Blues went into the game on a better run than Liverpool, but despite this and having to play with their third choice goalkeeper the Reds came from a goal down to win 2-1. Poor tactics and poor individual performances saw Everton seemingly overawed which cost them a second Cup Final appearance in 4 years.  As some consolation the final league standings showed Everton rightly to be the better team over the entire season, deservedly finishing one place and four points ahead of Liverpool. However, the overwhelming majority of Evertonians would have taken a Cup Final appearance at the expense of their neighbours over an ultimately meaningless superior league position.

Fast forward to this season and Everton must go into this game as favourites. Goodison Park is seeing further progress in the evolution process while it’s been yet another summer of revolution at Anfield. But one thing is vital if Everton are to succeed where they failed miserably last year. The players and the manager must go into the game believing they can win and not be affected by the same inferiority complex that has undoubtedly overcome them in recent encounters with the Reds.

Here are the key men:

The giant afro’d Belgian has been in superb form this season as he has been pushed forward into a second strikers role. His strength and awareness on the ball allied to his physical presence could give Liverpool’s defence a real going-over. A real handful at set pieces which could prove crucial in what’s likely to be a tight affair. A recent knee injury means he is in a race against time to be fit for the game. His presence on the pitch is even more essential to Everton’s prospects of success given the suspension to playmaker Steven Pienaar.

The teenager has been on the radar of Liverpool fans for sometime but his breakthrough into the first team and subsequently the National squad so early in the season has been unexpected. Blessed with pace, trickery and end product he is very well equipped to be the surprise package to catch Everton’s rearguard unawares if they concentrate solely on the usual threats such as Gerrard and Suarez. He is quickly becoming one the most influential stars at Anfield. Quite impressive for one so young and with more celebrated names around him in the same dressing room.