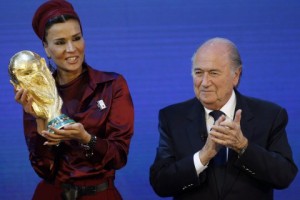 And so the gavel finally falls, though it’s hard not to suspect that the judgement had long since been made privately.  The means and motives that moved Sep Blatter and his Executive Committee to back a World Cup in the Gulf at any cost were pre-set well before the 3×2 cue-card declaring Qatar as the tournament’s 18th host was held aloft in Zurich in 2010, and as the emirate state continues to sure up the bonds that lock its financial institutions to the long-term future of worldwide football a decisive tipping point has come in the play-off between depth of resources and legislative practice.

Democracy is dead, long live… who can say? But if ever it was said that the wealth-mongers who control FIFA are prevented by a democratic failsafe from crashing the whole system into the soft under-belly of sporting fair-play, then that myth was today debunked with a water-tight finality.

Now that time has finally been called on global soccer’s most contentious, yet somehow least intriguing, soap-opera over whether Qatar can fulfil the founding condition of its bid and host a World Cup in the summer months, attention can turn to the inquest. In truth this has been underway for some time. Questions have been asked from the first day that medics and tourists alike raised the folly of high-intensity football in 50 degree heat.

Yet somewhere beneath it all lay the reassuring yet fatally naïve assumption that someone, somehow, would straighten out the disparity – the traditions of the seasonal game dictated they must. Either the venue would have to change or else human biology would need a re-tweak; the dogmatic hyperbole that came tumbling out of FIFA HQ was enough to make the latter feel eminently more possible.

But it is to be Qatar, and it is to be a winter World Cup. And in turn there will be repercussions that reverberate through the game and re-shape its future from grass-roots to governance.  Today the most optimistic forecast that can be made is that football at its top-end will continue to gradually erode the democratic tradition that for so many decades made the game feel more like a collective than a hierarchy.

Now corporate soccer systematically rewards the wealthy by virtue of their wealth and augments the powerful relative to their influence.  Football is still a game for the masses but in 2014 they are divided –those who thrash around in the swirling winds of austerity have inherited a different world to those who play the rigged markets of monopolised media sales and deficit-mocking tax breaks.

What FIFA’s decision to waive the condition that the World Cup must be played in the summer months amounts to is a moving of the goalposts that rips the guts out of fair-play and ethical practice. This is not to say that a winter World Cup is an intrinsically rotten idea – these are not the winter Olympics in Rio or the World Series on the moon.

The bedlam that will ring-fence the organisers of Europe’s domestic leagues as they scramble to clear space in their schedules for the global showpiece is, from an outside perspective, forgivable once the mammoth administrative undertaking has been tamed. It’s not the ends that leave a sour taste but the means by which they were achieved in the secretive board rooms of Zurich and Doha – here the contract was fouled and the game’s reputation sullied.

By allowing Qatar to host the World Cup outside of the window laid down in the literature that underscored the bidding process – within which the losing countries neatly staked their claims – FIFA has shown beyond refute that its power and willingness to legislate are not constrained by the bounds of its own constitution. The conditions of the winning bid were made clear and public but once those conditions could not be met the rules were bent to keep the juggernaut rumbling towards the Gulf.

Consultation with the wider football family was minimal and the Exec Com stuck rigorously to an agenda that placated the nuveaux-Nomenklatura. Now there is a new precedent in world football that may cloud the memory of how things were before.