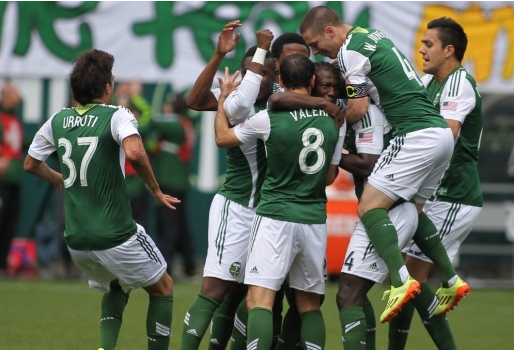 It took nine games for the Portland Timbers to register a Major League Soccer win in 2014 as Maximiliano Urruti’s late strike claimed a 3-2 win over DC United at the weekend.

Last season’s Western Conference champions have been struggling for form since limping to a draw at home to the Philadelphia Union in week one, but coach Caleb Porter is confident that the result will be the catalyst for a return to form.

“I think they’ll play freer, more confident. I think we’ll continue to get better and better. We’ve been playing well, but I think sometimes when you feel that weight of that pressure because you’re not getting the results, you get frustrated.

“This will definitely unlock us.”

The club’s loyal fans, who pack out Providence Park for every home game, certainly hope so with a five-point gap between them and a spot above the red line for a playoff place.

Of course, the season is barely over a quarter old and there is plenty of time to put things right, especially when you consider that one of last year’s standouts, playmaker Diego Valeri, is yet to get going properly.

One man making an impact is striker Gaston Fernandez and he has netted four times in eight games since arriving from Estudiantes de la Plata.

The 30-year-old grabbed the opener against DC United after just 34 seconds, the fastest goal scored by the Timbers in their short MLS history.

The team’s average of 1.33 goals per game isn’t too far off last year’s 1.54 but it’s at the other end that there have been numerous problems and the back line has been breached all too easily so far.

Donovan Ricketts, the MLS Goalkeeper of the Year for 2013, was sent off in the 2-0 defeat away to the Colorado Rapids in March and while his deputy, Andrew Weber, played quite well, the 36-year-old’s presence was missed massively.

There were big things expected of offseason acquisition Norberto Paparatto but the Argentine centre back has been abject and was dropped after four league games.

The preseason signs weren’t great for the 30-year-old as his own goal saw the Timbers go down 1-0 to the San Jose Earthquakes in the first game of the Rose City Invitational tournament, and things haven’t gotten much better since.

In the 2013 regular season, the Timbers conceded a total of 33 goals in 34 games and have leaked 15 in just nine outings to date this time round.

“We’ve just got to cut out the stupid mistakes in the back,” said full back Michael Harrington after last month’s dramatic 4-4 draw with the Seattle Sounders.

With David Horst and Andrew Jean-Baptiste leaving Portland for the Houston Dynamo and Chivas USA respectively, Mamadou “Futty” Danso has been given the nod alongside Pa Modou Kah at the heart of the defence.

Harrington is a lock at left back and it’s the opposite side that has seen plenty of debate with the experienced former captain Jack Jewsbury battling it out with 19-year-old Jamaican Alvis Powell.

Jewsbury has seen more game time this year but given he is the wrong side of 30, Powell should be given plenty of opportunities to claim the spot permanently.

This weekend sees the LA Galaxy in town so things won’t get any easier for the defence as they continue their search for a first clean sheet of the season.

With Landon Donovan and Robbie Keane backed by a more than capable supporting cast, the game will be a true test of whether the Timbers, as Caleb Porter believes, have in fact turned a corner.