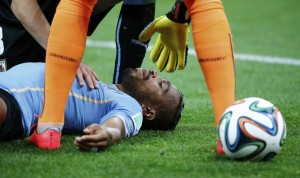 Following a demoralising week in Europe, the four Irish clubs involved in elite competition responded with four resounding wins in the league over the weekend.

St Patrick’s Athletic, Sligo Rovers, Derry City and Dundalk won by an aggregate score of 15-2 over their bottom-half rivals on Saturday and Sunday, offering the perfect fillip to fans who would have been demoralised by the varying manners of their defeats during the week.

Dundalk will be the happiest of the quartet, building on their impressive 2-1 away win over Hajduk Split in Croatia with a thumping 5-1 victory over Bray Wanderers at Oriel Park to lay to rest their disappointment over a narrowly missed opportunity to record one of the greatest triumphs in the club’s history.

Dundalk had the measure of Bray from the very off, with Richie Towell setting Stephen Kenny’s side on the way to a comfortable 5-1 victory within three minutes of kick-off, while Chris Forrester set Pats on their way to a 2-0 victory in Athlone with a seventh-minute opener.

Derry had to wait until the 20th minute before Michael Duffy – who opened the scoring in the 5-1 away reverse to Shakhytor Saligorsk – scored the first of his three goals in a comprehensive 6-1 victory, while Sligo left it late before Ireland U19 internationalist Sean Maguire settled the game with Limerick in what is likely to be his last game before returning to his parent club, West Ham United.

The Lilywhites now look increasingly likely to secure the title – their first in 20 years – after their main rivals Cork City unexpectedly lost 2-0 to Bohemians, becoming the first visiting side to fall at Dalymount Park in the league this season.

Owen Heary’s first league victory in Phibsboro was unfortunately overshadowed by a nasty-looking injury to the Leesiders’ Arsenal-linked full-back Brian Lenihan, after he fell on his head following a challenge with Gypsies winger Paddy Kavanagh, but that shouldn’t detract from what was a commanding performance by the home side.

Bohs’ record this season at the home of Irish football – which included six draws and four losses before Friday – will have come as a particular shock to a club whose success under Pat Fenlon was built on a miserly home record, but Friday saw them play with a rarely seen freedom, underpinned by masterly performances by former West Ham trainee Owen Wearen and winger Kevin Devaney.

Evidence that Cork’s title charge might not be all it’s cracked up to be came a week hence when, at Turner’s Cross, they went a goal down within six minutes in the televised game against UCD, and only worked their way back into the game courtesy of UCD captain Hugh Douglas’s rash penalty concession and red card close to half time.

They conceded early again this week when Steven Beattie – only recently returned from an attempt to crack the MLS in America – bravely put his head on the end of an Anto Murphy cross, and was knocked out cold for his trouble.

Beattie was allowed to continue in spite of his obvious discomfort – and a protracted period of treatment from the club physios – but was eventually forced to leave the field in the second half having been a peripheral figure in the interim.

In light of a number of high profile incidences during the World Cup in South Africa where players were allowed to continue having suffered obvious concussions, the role of officials and club doctors in protecting players from themselves has come rapidly back into focus.

Uruguay winger Alvaro Pereira was allowed to continue in the South American nation’s pool game victory over England in spite of having been clearly knocked unconscious by the unwitting knee of Raheem Sterling while, in the final, late call-up Christophe Kramer was eventually forced to retire after being knocked out cold.

Both players expressed a determination to continue in spite of clear reservations from their respective medical teams: Perreira aggressively argued with medics while stumbled on the sideline and was eventually allowed to return; Kramer continued for 20 minutes before being withdrawn, and later admitted he had no memory of the game.

Thankfully, having been brought to the Mater Hospital in Dublin following a lengthy break in the game, Lenihan was released with no significant damage, but the incident itself raises an important question about how football in Ireland deals with head injuries.

Lenihan was lucky that teammate Josh O’Shea and Bohemians captain Derek Pender were on hand to ensure his well-being – putting him in the recovery position in spite of any possible damage to his neck – however the FAI has no set procedure for players and officials to deal with concussion.

The Irish Rugby Football Union has belatedly taken a lead in tackling the issue of concussion, an injury that has recently caused the early retirement of Connacht and former Chiefs lock Craig Clarke, and it would behove the FAI to put in place a similarly sympathetic procedure to ensure that incidents like Beattie’s and Lenihan’s are better dealt with in future.

Concussive injuries are an unfortunate but inevitable consequence of contact sport, but if players, coaches and medics are all on the same page regarding how they need to be dealt with, we’d do an awful lot to ensure that the worst never comes to the worst.