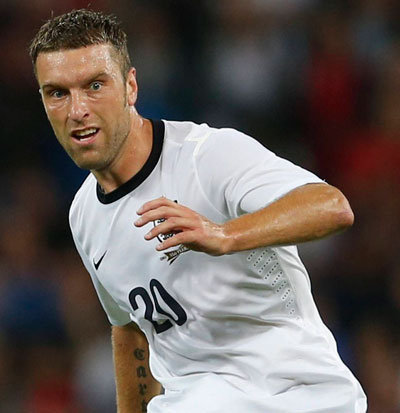 Following their 4-0 hammering of Moldova on Friday night, England regained control of their World Cup destiny.

The summit of Group H is the tightest of all eight European qualifying groups though and defeat for Roy Hodgson’s men at the Olympic Stadium in Kiev on Tuesday night would leave the Three Lions facing two massive home ties against fellow World Cup hopefuls Montenegro and Poland back to back over four days in the middle of next month.

In form Danny Welbeck scored a brace against Moldova but will miss the big game in Kiev having picked up a yellow card at Wembley on Friday. Welbeck’s absence could cost England dear as Ukraine go into this game bang in form having routed San Marino by a record 9-0 scoreline on Friday night. Mykhavlo Fomenko’s side have also won their last four qualifiers in a row – including a 4-0 rout of Montenegro – a side England laboured to a 1-1 draw with in Podgorica.

England are under huge pressure to avoid defeat in this fixture. The Three Lions are currently top of Group H with 15 points from seven games, ahead of Montenegro on goal difference, though Branko Brovic’s side have played a game more. Ukraine currently sit third with 14 points from seven games played. A win on Tuesday night would put them two points clear of England though with a banker three points against San Marino and hosting a Polish side who have struggled on their travels still to come. The Poles themselves sit on ten points from seven games, though they play San Marino on Tuesday night and a landslide win their will put last year’s European Championship hosts right back in contention for at least the runners-up spot. Poland and Montenegro will of course be hoping for a draw in Kiev.

With England missing several big name forward players, Roy Hodgson looks set to look to new man Ricky Lambert to lead the line. The 31 year-old has hit the net twice in two games for England and Hodgson will have his fingers crossed that he’s not overburdening the Southampton striker and that he can cope with a new level of pressure and attention. Jermain Defoe – a man who has scored 19 goals from more  than half a century of caps – is likely to be employed up front, and they will rely on the returning Michael Carrick to supply ball from midfield.

England needed a dubious penalty three minutes from time scored by Frank Lampard to secure a 1-1 draw at Wembley almost exactly a year ago, so Hodgson’s men will be under no illusions as to what a difficult and intimidating atmosphere lies ahead of them. This has been added to with the revelation that several England fans were attacked on the eve of the match in Kiev with at least one of those being stabbed and several requiring hospital treatment. Ukraine are also infamous for having a section of hardcore, racist hooligan “fans.” England of course have several players coming from various ethnic backgrounds. With so much to play for and both sides so evenly poised and with so much at stake, it would be a shame for matters off the pitch to overshadow the football on it.