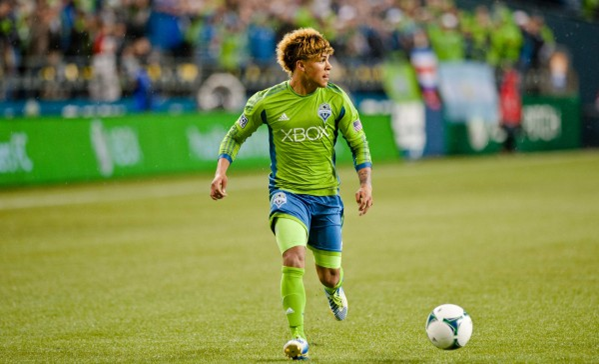 Having earned itself an unfortunate reputation in some circles as a ‘retirement home’ for the has-beens of world football, Major League Soccer this week celebrates a testament to its burgeoning investment in youth: the selection of DeAndre Yedlin to the All-Star roster.

Do not be fooled by the outlandish hairstyle – this kid has serious talent. Having so far this season started 13 MLS matches with one appearance off the bench, the 20-year-old Seattle Sounders right-back has been something of a revelation.

A Seattle native, Yedlin was raised by his grandparents Ira and Vicki, who he still cites as “big supporters” in his life. Having been born to a very young woman who felt unready for the stiff task of motherhood, he experienced an unconventional upbringing, but one which his U-23 coach says shaped his character: “He’s had some challenges in his life and he has risen to the occasion . . . on top of him being a great soccer player, he’s a great young man”, said Darren Sawatzky. Yedlin began playing soccer aged four when his grandmother signed him up for a youth team and by the age of 11 top coaches were taking note. It was during a trip to the U-12 national team camp that his dream of playing professionally began to take shape.

Yedlin went on to play for O’Dea High School and the Seattle Sounders Academy, where his performances earned him an invite to the US Soccer Under-18s national training camp and a spot on the Olympic Development Program state team from 2006 to 2009. At the time of his matriculation at the University of Akron he was ranked the seventh best freshman player in the country by Top Drawer Magazine, and went on to play in every match for Akron over his two seasons there. During this time he notched 12 assists, earned back-to-back appearances as a Mid-American Conference All Star and was named a Freshman All-American by College Soccer News.

In January 2013, Yedlin signed a professional contract with the Seattle Sounders, and since his arrival he has been a beacon of positivity in an otherwise disappointing and injury-ridden side.  10 days after becoming the first rookie to produce a Team of the Week performance on a professional debut, he scored a 30-yard volley against Tigres in the CONCACAF Champions League quarter final which Seattle went on to win 3-2 on aggregate. So impressive was Yedlin in the early stages of the season that right-back Adam Johansson, a Swedish international, was waived before even playing a 2013 league match, with coach Sigi Schmid citing the unlikelihood of first team football as the main factor.  With the limelight now more fixedly upon him, he has continued to put in noteworthy performances which have translated into call-ups to the United States U20 squad and, now, a place in the All-Star Team to face AS Roma later this month.

Whilst some New England fans may bemoan the omission of their own first-year right-back, Andrew Farrell, Yedlin’s selection as the first rookie All-Star in eight years is a sound choice. He has averaged 4.9 interceptions and 0.5 blocked shots per game (the highest figures of any full-back in the league) as well as a not-too-shabby pass success rate of nearly 80%, which demonstrates his competence with the ball at his feet. As one would expect from a 20-year-old, there are still big areas for improvement – his one-on-one defending being an example, exposed as recently as last weekend by Walter Martinez of San Jose. But nevertheless, Yedlin has played as well as any right-back in the league this season and is thoroughly deserving of his place as an All-Star.

However, the youngster’s progress perhaps signifies something greater than merely a personal success. When Yedlin signed for Seattle back in January he made history, becoming the team’s first ever Homegrown Player. The Homegrown Player Rule, which enables franchises to directly sign their academy players rather than risk losing them to other teams in the SuperDraft, was brought in to encourage investment in youth programmes, and has been embraced by some teams more than others (FC Dallas currently have eight homegrown players on their roster; the San Jose Earthquakes have none). Needless to say, the success that Yedlin is experiencing with the Sounders is an attestation to the benefits of having such a rule, and without detracting too much from the likes of Juan Agudelo and Andy Najar, he may well be the first real bit of proof that Don Garber’s policy, implemented five years ago, is working. Could Yedlin be the harbinger of an impending influx of highly talented youngsters into the MLS?

Whilst it is clear that DeAndre Yedlin owes a great deal of his success to both his family’s support and his own strength of character, the way that he has taken the league by storm could well be evidence of the strides that MLS youth development programmes have taken in recent years. Talented, explosive and down-to-earth, one thing is for sure – if Yedlin is a sign of things to come, the MLS has a very bright future indeed.

For more on MLS, check out the latest episode of our Hold the Back Page podcast!