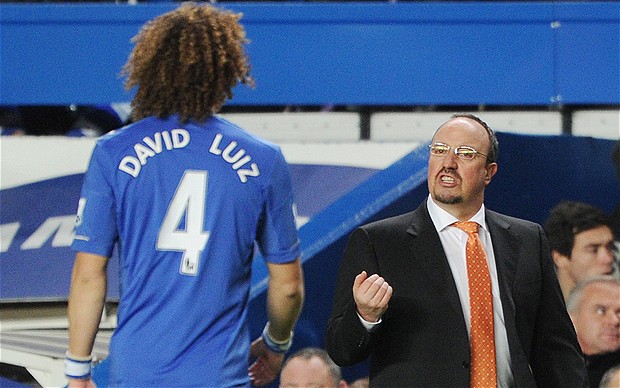 If one game encapsulated David Luiz’s career at Chelsea, it was against Leeds United in the quarter-final of the League Cup on 19 December.

On 37 minutes, the Brazilian – deployed, on paper, in his natural central defensive position alongside Branislav Ivanović – audaciously, and foolishly, tried to chip the towering Sam Byram with the outside of his boot when well-positioned outside Leeds’ box.

With possession easily recovered by Byram, the pacey Jerome Thomas was allowed to exploit the space behind Ryan Bertrand and seamlessly set-up Luciano Becchio (who Luiz had previously handled to good effect).

However, to be fair to Luiz, these fairly regular ‘moments’ never completely throw him and just over forty minutes later, he played a sumptuous, side-footed, raking pass – as a polar parallel to his lazy first-half dink – to release Eden Hazard to coolly finish on 81’.

Admittedly, a one-dimensional argument can be made that Luiz’s mistake in the first-half would have been just as costly had he been deployed as a defensive midfielder – with the leggy John Terry/Gary Cahill returning in the heart of the defence alongside Ivanović – but that is a disservice to Luiz.

An easy target for the British media – owed to his naivety, rarely sensible defensive play and audacious mop – Luiz offers just as many defensive qualities in the defensive midfield position as his obvious, classy attacking threat.

His ability to click into a defensive triangle ahead of Ivanović and Cahill against the slow-paced Monterrey on 13 December and versus Aston Villa on 23 December was very encouraging and a throwback to André Villas-Boas’ ardent use of Oriol Romeu as a defensive splitter between Terry and Luiz in the first half of 2011/2012.

Playing between the lines when Chelsea were in possession, Luiz’s fresh, incredibly conditioned, presence-filled, dynamic play was rightly lauded and the Brazilian’s temptation to nutmeg or dribble past the lone striker he would usually mark was not so directly dangerous to Petr Čech.

Basically, the shackles – which, admittedly, have always been loose when Luiz was deployed in defence by Carlo Ancelotti (desperate tackle on Wayne Rooney in Chelsea’s 2-1 victory over Manchester United on 2 March, 2011 ), Villas-Boas (mistake in 3-1 defeat to Napoli on 21 February, 2012 ) and Roberto Di Matteo (error in the 3-0 defeat to Juventus on 20 November, 2012) – were released.

Admittedly, erratic positioning and risk-taking are always going to be issues for Luiz – unlike with José Mourinho’s careful harnessing of Ricardo Carvalho after a testing first few months in the Premier League in 2004/2005 – but a re-deployed position may be the perfect solution.

Against Monterrey, it took the pressure off Luiz – allowing him to operate in a free role when Chelsea were in possession, secured with John Obi Mikel covering – and Chelsea’s midfield became something of a 1-2-2, with Juan Mata dropping in to link with Luiz when necessary.

The biggest effect was, unsurprisingly, Chelsea’s unpredictability, though. After all, a problem Chelsea have seriously suffered with since Mourinho left the club is a wildcard, back-up strategy.

With Mourinho, while crude, it was the incredible pace of Arjen Robben and Damien Duff, but, since then, Chelsea have struggled somewhat with an attacking identity.

Yes, Mourinho certainly benefited from Didier Drogba’s battering qualities, but these, occasionally, became a lazy get out for the Portuguese’s successors in continuing Mourinho’s use of a 4-3-3.

As a result, it is little surprise that many of Chelsea’s squad, subconsciously, still seem to see the presence of a 6ft 2 1/2in Ivorian when lofting an unsuited, fifty-yard pass forward to Fernando Torres.

In fairness, with Mata, Hazard and Oscar in a 4-2-3-1 under Di Matteo, initially, it seemed Chelsea would never require a deeper outlet but even these three diminutive talents do not always work in synch every match.

Di Matteo struggled with this problem in the final weeks of his reign and, bizarrely, so did Torres – who found himself being given the ball intricately ten yards from goal, with the incessant requirement to dribble.

Neither are the post-2010 Torres’ strongest qualities and much like Ronaldo did post-2002, he has had to adapt to a new environment, new playing styles and, ultimately, a new knee. Still, one thing remains: the Spaniard’s love of a raking, first-time through ball.

This is Luiz’s primary asset going forward as when he is in defence, naturally, power over finesse takes precedence when the Brazilian launches a searching hail mary at, rather than to, either Hazard, Victor Moses or, of course, Torres.

This shift of position and passing style was evident against Monterrey, with Luiz playing the pass of the match in setting up Hazard for a goalscoring opportunity on six minutes and playing Torres through on forty-four minutes.

It is this contrast, when those crucial thirty yards further up the field, that makes Luiz’s range and accuracy so deadly in releasing a dangerous, defence-splitting diagonal pass at least once in a match.

Of course, there will be those who will say that Luiz will be easily marshalled, bullied and closed down by dogged central midfielders and, indeed, defenders, but is that not the point?

Even as a decoy, the Brazilian’s incessant weaving with and without the ball could be perfect for dragging players out of position and allowing Mata, Hazard and co even more pockets of space – without even addressing Chelsea’s added threat with set-pieces.

With Chelsea’s links with the somewhat unsuited, holding midfielder wise, Marouane Fellaini of late, Rafa Benítez could do a lot worse than continuing to test out the merits of Luiz in that position: the interim solution for an interim manager.