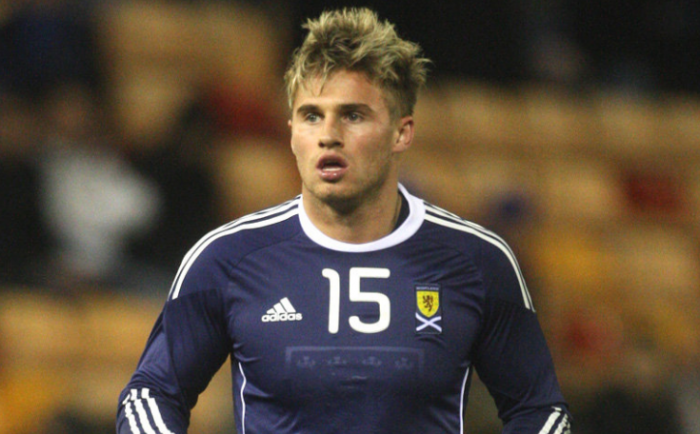 The most protracted transfer in Scottish football for some time was finally concluded last week as  SPFA Young Player of the Year David Goodwillie signed for Blackburn Rovers. The highly rated Dundee United and Scotland striker completed his medical at Ewood Park sealing a £2.8 million pound move and thus ending Rangers continued interest in the player.

Its the move that both United and Goodwillie were after. Only a week ago the player himself told Terrors boss Peter Houston that he saw his future down south and his manager agreed with him stating a move to Rangers would not be the best thing for the youngster. Houston said “In my honest opinion, with his off-field problems, coming to Glasgow isn’t the best thing. I said that and I still stand by that. You know the troubles that can happen here in Glasgow – and I’m a Glaswegian”.

Those off field problems Houston speaks off are well known if not notorious in Scotland. However for Blackburn fans here is a recap. Just after breaking into the United squad, Goodwillie from the infamous Raploch estate in Stirling, was arrested and fined £250 for assaulting a man in a nightclub in his home town in 2008 at the age of 18. A year later Goodwillie was up to his old tricks again as he was once more charged and fined,  this time after knocking a local rugby player unconscious, again in Stirling. These two incidents were enough for Houston to place Goodwillie under ‘house arrest’ to keep him in check.

However the most serious controversy surrounded the player was the recently dropped  rape charges. Goodwillie was charged by police for his part in an alleged rape incident that took place in Armadale, West Lothian at Hogmanay last year. After seven and a half months of sifting through evidence, the Crown Office last week decided there was insufficient evidence for Goodwillie to stand trial. The collapse of that case essentially triggered a scramble for his signature.

Blackburn fans should note that Goodwillie currently stands accused of assaulting a man in Glasgow late last year and the case is ongoing.

However, its not all bad with Goodwillie and it is hoped that his move down south will see him mature into a responsibly professional. He certainly has the ability to succeed down south.

The 22 year old striker has been at Dundee United since he was a schoolboy and signed professional terms in 2005 at the age of 16. For the early part of his career he played only occasionally for the club mainly as a substitute or in cup games. He started to make the breakthrough to the first team in season 2009 – 2010 scoring 13 times in 40 appearances. He also carved his name into United folklore, scoring the opening goal in their  Scottish Cup Final victory over Falkirk. Those achievements saw him crowned Scottish Premier League Young Player of the Year.

Last season Goodwillie upped his game yet again scoring in six consecutive league games  and ended up with a career best 18 goals in 43 appearances including 16 SPL goals.  Amongst those was a late winner against Rangers at Ibrox, running from his own half to beat McGregor in the Rangers goal in one on one, and a spectacular overhead kick against Motherwell rivalling Wayne Rooney’s effort against City, at least in eyes of his boss. Last season’s efforts saw Goodwillie rewarded with the SPFA Young Player of the Year award.

The youngster also  made his full international debut for Scotland against the Faroe Islands in November last year and has been called up to the full squad again for the Denmark fixture next week.

Goodwillie’s progress over the last few year has seen him elevated to something approaching a great white hope for the national team. He has the build, pace and power that is required to play at the top level but he is also an accomplished finisher which has been something of a rarity for Scotland over the last decade.

His ability should allow him to contribute straight away at Blackburn albeit a little patience will be required as the standard is obviously higher south of the border and a period of adjustment will be necessary.

All in all though Blackburn have got themselves what i would consider something of a bargain and their fans can look forward to seeing their new striker bang the goals in over the next few seasons…providing Steve Kean can give him a little guidance and keep him out of trouble!

One thought on “David Goodwillie off to the Premier League…finally”