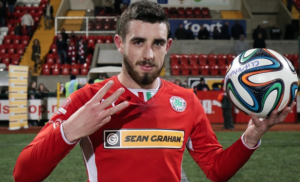 Courtesy of a glorious hat-trick from top-scorer Joe Gormley, Cliftonville completed another emphatic home victory as they cruised past Institute 4-0 at Solitude.

The three points, however, did not see the champions reclaim their spot at the summit of the Danske Bank Premiership as Linfield strolled to a 3-0 win over Ballinamallard. For Tommy Breslin and his Cliftonville side, it was very much a case of having to bide their time before Warren Feeney’s Linfield slip up.

The Reds are hoping to complete a hat-trick of league titles in what is the most prosperous and exciting chapter in the club’s history. However, an old foe stands in the way down the road in South Belfast.

Warren Feeney, taking over from stalwart David Jeffrey at the start of the season, has rode the storm to guide the Blues back to where they feel they belong; the top of the table. What happens next is anybody’s guess but it looks like it could be a hammer-and-tongs battle between two of Northern Ireland’s most bitter enemies.

That is not to discount the challenges of the other key actors in this season’s title race. Portadown, under the observant gaze of Ronnie McFall – the longest-serving manager in European football- are keeping apace at the top of the table and should not be underestimated.

The Ports’ title credentials were clearly expressed last weekend when they downed Crusaders at Seaview. Portadown showed up to the Shore Road in North Belfast with a decisive attacking plan and stunned the Crues as they romped into a 3-0 lead thanks to strikes from captain Michael Gault, Mark McAllister and Darren Murray.

With the game seemingly tied up, the Crues manager Eddie Patterson opted to throw the kitchen sink at Portadown and rallied to get the match back to 3-2. In a whirlwind final ten minutes, Portadown came through constant bombardment on their goal to emerge as victors. It was a great testament to their persistence in the face of a rising tide of attacks. The momentum had clearly swung in the final twenty minutes when Billy Joe Burns and Jordan Owens struck to give Crusaders a glimmer of hope but Portadown stood firm and ensured that they travelled back home with three well-deserved points.

These are the games that really separate the top sides from the rest – maintaining concentration and focus to ensure victory is not thrown away requires a high quantity of professionalism. Portadown are looking for a first league title since 2002 and first title of any kind since 2009 under legendary manager Ronnie McFall but will need to pick themselves up after their recent wobble.

Testament to the unpredictability of the Danske Bank Premiership this season, the Ports went to Warrenpoint last Friday night and suffered a shock 2-1 defeat to the league’s basement club. Their defeat paved the way for Linfield to complete their 3-0 win over Ballinamallard and climb to top spot in the league in one what is developing into one of the most exciting and closely-fought title races in recent memory. 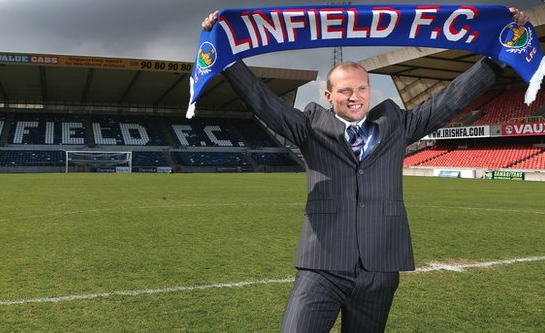 The characters on the touchline make this title race hard to call. Warren Feeney is in his début campaign with Linfield and his apparent inexperience would certainly make claiming a league championship within his first 12 months a mountainous task.

On the other hand, Ronnie McFall and Tommy Breslin share a wealth of title-winning wisdom between them and definitely know how to get the job done. Breslin has done it for the past two years but Ports manager McFall may feel like he finds himself in slightly unfamiliar surroundings after the club’s last title in 2002.

Managers are one thing, but the players are the men who get the job done on the pitch and the strikers supplying the goals are as important as anyone. Cliftonville are certainly not lacking in that department as they possess the most lethal weapon up front in Joe Gormley. The league’s top-scorer and reigning NI Football Writer’s Player of the Year has continued to defy rational expectations this season with his 24 strikes in the current campaign.

After spearheading The Reds’ sensational 7-0 victory over Ballymena United- where they scored all seven goals in a frenetic 30 minute spell- Gormley was on hand to complete back-t0-back home hat-tricks on Saturday against Institute. Gormley has not only cemented his place as the deadliest marksman in the league this year, he has discredited the idea that he would falter slightly without Liam Boyce, with whom he struck up a gloriously productive partnership last season en route to retaining the title.

Boyce has since made the big leap to the Scottish Premier League but it has not derailed Gormley’s quest to become the greatest player currently plying their trade in Northern Ireland.

Gormley may continue his prosperous spell in front of goal in another Belfast derby against Glentoran but eyes will certainly be on Saturday’s showdown between Portadown and Linfield at Windsor Park. The magnitude and importance of the match is huge, as both sides look to speed ahead in the race for glory.

The rivalry is fierce and the current situation at the top means that Windsor will most likely house a pressure-cooker atmosphere and the match is expected to be physical and tough. Feeney will be looking to his lethal strike duo of Aaron Burns and Andrew Waterworth, who have 20 goals between them this season, to fire the Blues to victory and open up a four-point advantage over Saturday’s opponents.

It will not decide the title, but it will be a massive boost to whoever takes the spoils, especially heading into the busy Christmas schedule where every team is likely to drop points. 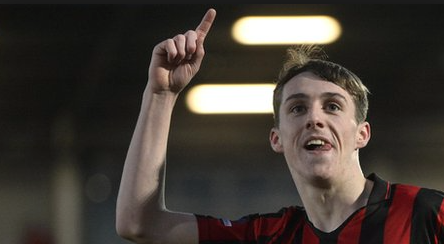 With Linfield, Cliftonville and Portadown all vying to be the best, it would be easy to forget Crusaders, who are lurking ominously in fourth-place. However, the Crues have the massive advantage of playing at home on Friday night against struggling Dungannon Swifts and should they win, they will find themselves only a point off Linfield and level with the other two contenders.

Stephen Baxter’s men have been lethal up front but leaky in defence this season, resulting in a considerable degree of inconsistency that has prevented them from holding a commanding position at this point. Jordan Owens has been the shining light for the North Belfast side this season; with 14 strikes the 25-year-old has propelled his side to within touching distance of top spot and will be looked upon to once again be the match-winner when they take on Swifts.

With four teams still in contention, this year’s Danske Bank Premiership stands tall as one of the most intoxicating in recent years and the quality of football and great competitive spirit that has punctuated this season deserves a final-day finish.

Will Cliftonville make it a hat-trick? Can Linfield reclaim their throne under new manager Warren Feeney? Will Ronnie McFall guide Portadown to their first title in 12 years? Or will Crusaders upset the top three and roar to their first league triumph in 17 years? These questions will eventually be answered come May, but until then there is still plenty of entertainment and shocks to enjoy.