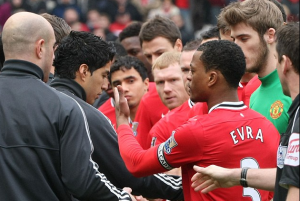 Manchester United beat Liverpool 2-1 in a game that will more be remembered for Luis Suarez refusing to shake Patrice Evra’s hand and the two managers, Kenny Dalglish and Sir Alex Ferguson, controversial interviews. Here is the full transcript of the conversation between Dalglish and Sky Sport Geoff Shreeves.

Kenny Dalglish in his after match interview with Geoff Shreeves from Sky Sports said his team deserved credit after giving United a 2-0 lead. He said, “I thought that, obviously, with the two goals coming as close as they did that it made it really difficult for us to get anything from the game.

“To the boys credit they got one back when Luis knocked one over the line from a free kick and then De Gea has a good save. Overall, I think they were the better side but you’d expect that with them at home.

“Five minutes, two goals. It gave us a mountain to climb.”

Shreeves then asked, “Did you have a view on the incident just before half time when Luis Suarez was through and Rio Ferdinand got there, Who got the first touch on the ball, we still can’t decide?

The Liverpool boss replied in good humour, “well if ye have 24 cameras here and 34 repeats and you can’t decide then there’s no chance for me to have a valid opinion.”

He then added, “I thought maybe he nudged the first one, but I don’t know if Ferdinand played the ball first or not.”

The conversation then moved onto Dalglish’s substitutions with the interviewer saying “they had a terrific effect” and asking “what were you trying to change?”

“We were trying to get back into the game,” he replied, “and everybody just needed a wee change and sometimes they work and sometimes it doesn’t. We scored a goal but still lost the game.

“We left ourselves with a mountain to climb and we couldn’t get over it.”

With all the questions on the match all but answered, Shreeves moved to the obvious one and asked “As you know the football won’t dominate the headlines tomorrow. Firstly, your reaction to Luis Suarez refusing to shake Patrice Evra’s hand and did you have an inkling that he was going to do that?

“I never knew he never shook his hand,” Dalglish answered.

“He refused to take his hand,” Shreeves probed.

Dalglish, beginning to get unhappy with the line of questioning, replied, “I’ll take your word for it. But I don’t know. I wasn’t there. I never saw it. That is contrary to what I was told.”

“But now that I have told you that he did do it Kenny, your reaction to that?” said Shreeves still looking for his answer.

“Well, we’ll ask him and we’ll take it from there.

“Do you think you have to take a serious look at his refusal to shake his hand and the way it subsequently set the tone for elements of what happened here today?

“I think you’re very severe,” he told Shreeves before adding, “and I think you’re bang out of order for blaming Luis Suarez for anything that happened here today. “I think predominately both sets of fans behaved really well. They had a bit of banter between each other – no problem. Right, how many bookings was there?” he said turning the question on the interviewer.

Shreeves coolly answered, “Kenny, I’m not not talking about the fans. I wasn’t asking about that, I was…” before Dalglish cut him off repeatedly asking “how many bookings was there?

“Kenny, I’m not talking about the fans,” the interviewer answered.

“How many was there?” the Liverpool boss demanded.

“Yes, but Kenny,” Shreeves pushed, “you also know about the controversy in the tunnel. The police were called and the stewards were called before and after the game because of the tension during the game and a lot of that was down to the fact that they didn’t shake hands.”

“You know something else?” asked Dalglish. “You see when we had the game, the FA Cup tie, right, because there was no 24 hour news channel in the build up to the game nothing like this happened.”

“No” said Dalglish growing more and more unhappy as the interview progressed, “I’m just saying that it was a bit tight getting through there [the tunnel] but I didn’t see anything. I was here. Right. So if you want to know what happened in there ask somebody else who was there because I wasn’t. Okay.”

The conversation ended with Shreeves thanking Dalglish for the interview.