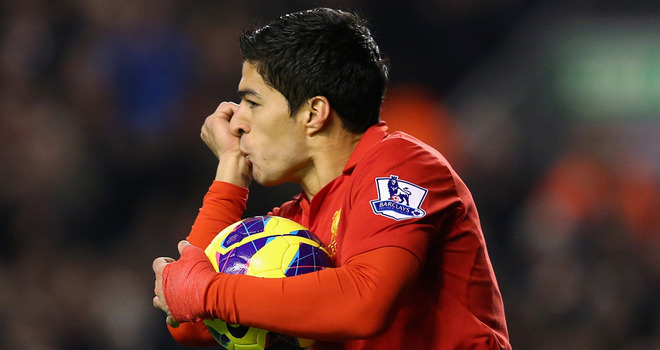 It may surprise you but Luis Suarez and Jesus have a lot in common. Jesus performed miracles. He turned water into wine and walked on water. Suarez on the other hand can transform a Stewart Downing pass into a thing of rare beauty. He can make the outrageous look astonishingly easy. Jesus like Suarez was a bit of a rogue. He broke the rules.

The Jewish hierarchy frowned upon people describing themselves as the son of God . They demanded action and brought him to Pontius Pilate. As we all know Pilate felt that Jesus had over stepped the mark. He deemed that flogging would be a suitable punishment. There was no way that the baying mob were not settling for this. They were outraged and they demanded their outrage secure the toughest possible sentence for this rogue (sound familiar). Understandable after all Jesus was in the wrong .

Likewise what Luis Suarez did was wrong . It should go without saying that it is frowned upon to sink one’s teeth into an opponent’s arm. Suarez will get a lengthy ban for what he did but that does not seem to be enough for the media or the baying mob. Now an institution that gave the world deceit, phone hacking, phone tapping and eventually the Leveson Inquiry is suddenly a bastion of moral rectitude.

A ban not enough! The faux moral outcry has begun. How can Suarez sleep at night?Crucify him!Surely shouldn’t such a mendacious, vicious character be deported or banned forever?! Crucify him! Children watching the game will be scarred forever. Like the crowd demanding the crucifixion of Christ, half of them do not know what they are baying for yet they scream crucify him.

It was Graeme Souness who sold the story of his heart operation and recovery to The Sun newspaper. Liverpool fans emotions ranged from visceral rage to crushing disappointment at his actions but they did not demand that he be removed from his position because of a stupid mistake. Souness should have known better but he made a mistake.

Similarly to Suarez, Souness played right on the edge of the limit. I still grimace when I see some of his tackles today. He was a winner who was willing to do anything to secure victory. Graeme Souness should be imprisoned retrospectively for his on pitch conduct during the 1980s. Now that sentence is patently rubbish but you see this writer would like to muscle in on the faux moral outcry.

Souness should also know that Suarez is not the first footballer to damage the reputation of Liverpool Football Club or any club for that matter . Kevin Keegan engaged in a fist fight with Billy Bremner at Wembley. Should Liverpool have sacked him? Eric Cantona assaulted a supporter, sack him? Footballers do stupid things all the time. What Suarez did was wrong and stupid but some perspective is needed.