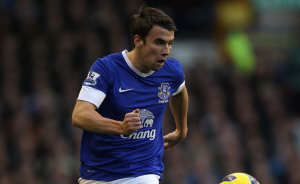 While Sky Sports are busy drooling over Ross Barkley, his Everton teammate Seamus Coleman has been making headlines of his own. Stunning goals against Swansea and Southampton, followed by last week’s sweet strike against QPR took the Irishman’s tally to six. Could Donegal’s finest be the next Gareth Bale?

Coleman has six goals in league and cup games this season, two more than fellow scorer last weekend, Barkley. Not bad for a full-back. Coleman’s also contributed one assist and had 18 efforts at goal in the Premier League. The strike against Queens Park Rangers marked four scores in his last six matches.

The attacking full-back started the Premier League in lightning form netting on the opening day against Norwich City. He’s contributed to Everton’s impressive form that has seen the Toffess push for a Champions League spot and helped his defensive colleagues to nine clean sheets this term.

Coleman made 41 appearances last season for both club and country and is now a first choice for the Republic of Ireland. The Killybegs native even took hold of the captain’s armband for the World Cup qualifier away to Germany.

Nominated for the PFA Young Player of the Year in season 2010-2011, Coleman, the former Sligo Rovers star, won the club equivalent at Goodison Park. He was the Irish U21 player of the year in both 2009 and 2010 and was handed his Irish début in the Carling Nations Cup tie with Wales.

While Irish fans clamoured for his inclusion in the Republic’s starting line-up, the man who can also play on wing was placed on the stand-by list for Euro 2012. He has bided his time to make his mark in the green jersey having grown up playing Gaelic football before concentrating on the League of Ireland with the Bit O’Red.

After netting just once last season, in the FA Cup against Cheltenham, the Donegal native is bursting with confidence this campaign

“If you ask any striker or midfielder who scores goals, if they score one week they feel like they’re going to score the next,” he told the Liverpool Echo. “That’s the way I am at the minute.”

Coleman has been consistently name-checked by international manager Martin O’Neill in reference to the quality he has inherited in the Irish squad.

The New Year is a big one for his club as the Goodison Park outfit look to maintain their lighting form. Then in February, Ireland will learn who will stand in the way of qualification for France 2016, a campaign where Coleman looks set to play a major part.

One thought on “Could Coleman be the new Bale?”