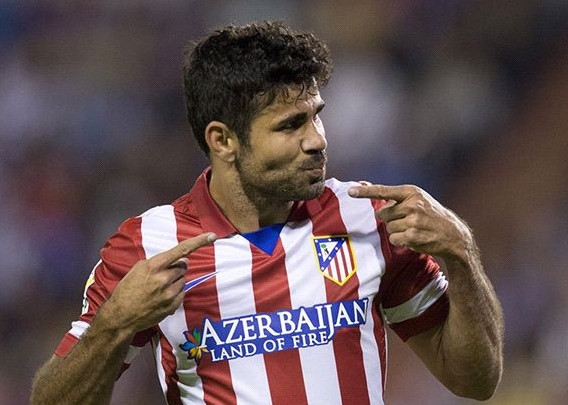 The popular consensus ahead of next month’s World Cup in Brazil is that the tournament can be the defining moment in Barcelona forward Lionel Messi’s career.

If the Argentina captain can propel his country to glory, on enemy soil, it will be hard pressed to argue against the inevitable proclamations that the diminutive genius is the greatest footballer of all time. However, even if Argentina fall short, Messi’s place among the pantheon of the game’s greats has long been assured.  The next two months will go some way to defining Messi career, but it will not be the definitive estimate of his career.

Messi’s Atletico Madrid rival, striker Diego Costa, is, however, facing the prospect of a career defining period. It would be foolish to suggest the striker can, or ever will be able to put himself on par with Messi. However, Costa has a unique opportunity to capture the game’s greatest prizes and thus secure his standing as a peak operator.

The striker has had a stunning season, scoring 36 goals in 50 appearances and driving his club to an historic league title and Champion’s League final. A reoccurrence of a niggling hamstring injury prevented Costa from pushing his team over the line in last night’s La Liga decider against Barcelona. The striker went from been visibly distraught to elation upon his side capturing the unlikely title.

However, with part one of the double complete, Costa’s prime focus will be on a swift return for Saturday’s Champions League final against city rivals Real Madrid. In what may prove to be a tight encounter, Costa’s power and proficiency could be the decisive factor, as it was when the two sides met last September. The striker scored the only goal as Atletico won at the Bernabéu for first time in the league for 34 years, spoiling Gareth Bale’s debut and upstaging Cristiano Ronaldo.

Regardless of whether Costa can return for the culmination of Atletico’s improbable season, his power, intensity and proficiency have embodied the qualities of Diego Simeone’s side. Costa is reported to be on the verge of a €40 million move to Chelsea, and, if so, the Champion’s League final will be a fitting end to his time with Atletico. Saturday’s final, and next month’s world cup, could mark the beginning of the next stage of Costa’s career.

‘Costa is not Spanish’ chanted the Real Madrid fans as their team lost last year to their great rivals. And while the striker may not be Spanish in their eyes, he holds a Spanish Passport and within five months he would make his debut for the World and European Champions. Costa had made just two friendly appearances for his native country and was not included in Luiz Felipe Scolari’s squad for last year’s Confederation Cup, despite Brazil’s relative lack of quality centre-forwards. As he had not appeared in a competitive game, Costa was free to choose which country to represent.

When Brazil came calling again last autumn it was too late. ‘When I heard there was interest from Spain I began to imagine things, to think: ‘Why not?’ the striker said in March, in an interview with Spanish-based journalist Sid Lowe. ‘It was a privilege that the world champions want you, a privilege to be able to help the great players they have. I felt very important. I valued it a lot’. Therein lays the basis of Costa’s decision. Whereas he felt undervalued by Brazil, when he was just a promising striker, Spain’s interest reflected his new status and Costa’s decision represented his new-found place at the cusp of the game’s elite players. He chose perceived loyalty and estimation of his personal value over national allegiance, or the emotional pull of potentially winning the World Cup in the country of his birth.

It was a bold statement and one which irked Scolari, who said ‘He is turning his back on a dream of millions, to represent our national team, the five-time champions in a World Cup in Brazil’. The Brazil manager is clearly bullish about Costa’s defection to their key rivals. Yet one can only imagine Big Phil,when he announced his squad with just two centre-forwards, was left wondering what might have been. Costa, with his incisive movement, powerful running and clinical finishing, would have been the ideal focal point of his attack. And perfect foil for Brazilian golden boy Neymar.

Indeed, it is telling that Chelsea, the club team that perhaps most closely resemble Brazil, see Costa as the missing piece in their side. Both Chelsea and Brazil are built on a solid defence with an industrious midfield. At their best they are both direct, fast and hard pressing, with a sprinkling of individual flair, with Belgium’s Eden Hazard being Chelsea’s equivalent of Neymar. On July 14th, the day after the World Cup final, will Scolari, as his Chelsea counterpart José Mourinho has done all season, be ruing the absence of a world class centre-forward?

Costa himself was largely anonymous during his adopted country’s friendly win over Italy in March and, until the World Cup begins, it is unclear exactly how the striker fits into Spain’s tiki-taka system. However, even if it is by virtue of denying their main rivals of his quality, Spain is set to profit from Brazil’s loss as Costa could prove the tournament’s decisive figure.

From international cast-off and second choice Atletico striker, to a Spanish, and potential, European and World champion, in less than a year. Costa is on the cusp of the game’s greatest prizes, and cementing his place on football’s elite stage.

One thought on “Costa on the cusp of greatness”