It has been a disaster of a season for Lille LOSC. Through 24 weeks last season, Lille held down the third and final Champions League spot in Ligue 1 and had allowed the least amount of goals at that point.

They were three points up on Saint-Etienne for third and eventually held off ASSE the rest of the way. Compare that to this season and the season has been a train wreck. Lille are 11th in Ligue 1 and are 17 points off both Olympique Marseille and Paris Saint-Germain for the second and third.

It was fair to say that Lille would suffer some sort of drop off from form, seeing as they sold their best attacking player, Salomon Kalou in the summer transfer to Hertha BSC. Lille even with Kalou’s 16 goals last season only finished in a tie for ninth for goals scored.

But to expect it Lille to drop to the degree that they have has been an eye opener on the dearth of talent at René Girard’s disposal. I wrote about Lille struggles back in late October when they were still in the middle stages of their eventual downfall to mid-table obscurity:

The flipside to that is this could be the worst attacking Lille side in the 2010’s. The team has relied on two teenage players on loan from the EPL in Divock Origi and Marcus Lopes. Lopes currently is nursing a hamstring injury which has led Lille to abandon the 4-3-1-2 in favor of a 4-3-3 versus Everton in the Europa League and a 4-2-3-1 versus Guingamp.

Lopes before the injury was probably their most electrifying player, averaging 2.4 Key Passes per 90. Origi himself has been very sporadic throughout the season, the epitome of Lille’s identity. The midfield three of Idrissa Gueye, Rio Mavuba and Florent Balmont often times play as duplicates (even though Gueye is much more superior to the other two) which has hindered Lille from having an extra attacker. Often times with Lille it’s the final touch/penetration that has eluded them.

Only having 31.3% of shots hit the target has also contributed to Lille having a horrific total goal conversion rate in the penalty area, which speaks to Lille’s issue with getting players to make darting runs behind defenses. I wouldn’t be surprised if Lille didn’t even hit around league average by seasons’ end, seeing as they’re currently way below average in their total goal conversion rate.

It has not gone better for Lille since then. Divock Origi went from his play being sporadic to downright pitiful, Marcus Lopes has had more spells with injuries and the once impenetrable defense that Lille banked on earlier in the season has slowly faded away. 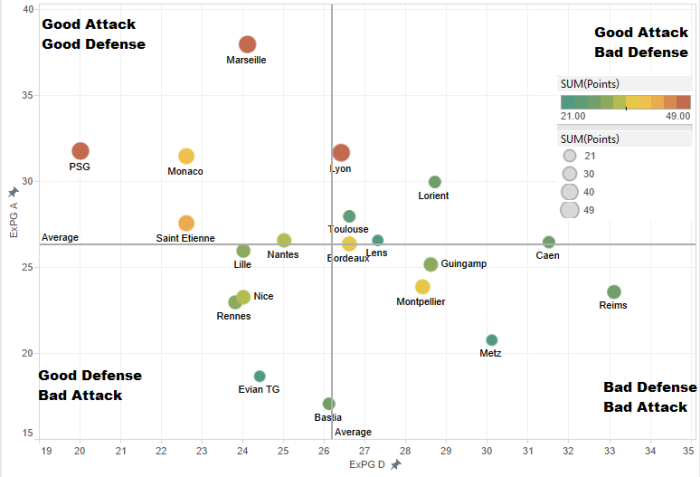 As you can see Lille are hovering in the good defense and bad attack region, alongside their near doppelgängers in Nantes.

The most disturbing trend with Lille has been that their attack season by season has declined, which also speaks of a lack of talent being brought in to supplement the departures of Dimitri Payet and Salomon Kalou.

What I also wanted to see was just how Lille’s attack has fared in the two completed season previous and this current one. To see how deficient they’ve been this season compared to their expected data previously, I divided the goals scored by Lille over what their expected goal data.

Just looking at the talent on hand and it’s not a shock to see just how bad Lille have been finishing wise. Divock Origi is only 19 years old and this is his first season playing in a notoriously stingy league for goal scoring, so it’s easy to understand why he’s been struggling.

Nolan Roux is an okay striker but nothing more and the rest of the lineup is filled with defensive midfielders who are replicas of each other.

There is a little ray of hope however (emphasis on the word “little”). Marcus Lopes has had injuries interrupt his loan spell at Lille but has been a nice spark plug when healthy. He’s probably the best #10 on the club and allows them to play a formation featuring a central attacking midfielder.

I mean look, this isn’t the most inspiring radar you’ll see from a #10, but compared to his competition on the squad, it’s something. A very good playmaker at a young age, it seemed that Lille were at their attacking best when both him and Origi started.

It’s been a very forgettable season for Lille LOSC. The defense has been the saving grace of an otherwise disappointing year. Their attack has plummeted to new levels of sub-standard quality and even with Marcus Lopes’ returning to the lineup, he probably won’t move the needle too much and resurrect Lille’s ailing attack.

How Lille manage to prop up their floundering offense will be an interesting plot to monitor the rest of the season.