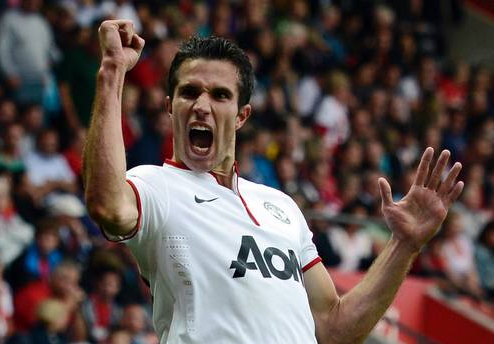 After 69 minutes at Southampton’s atmospheric St Mary’s Stadium, the £24million Dutchman was in many peoples minds about to face the infamous Fergie hair dryer for the first time as Van Persie stepped up to take a penalty and failed with a cheeky chip that was comfortably pushed away by Kelvin Davis. It was Davis’s poor clearance out that led to United being awarded the spot kick.

Prior to the penalty, United looked fruitful going forward. The combination and link up play between new boys Shinji Kagawa and Robin van Persie is one that is continuing to blossom. Kagawa’s intelligence on the pitch in terms of picking the ball up in various positions was once again illustrated today.

In my mind United could and should have used Valencia as an attacking outlet more times in the match. Valencia is brilliant at beating a full back with the ball and didn’t seem to do that as often compared to other games. This could be because of Rafael’s constant attacking play, the energetic full back never lacks confidence going forward, giving Valencia another option with his overlapping runs, but it’s at the back where the Brazilian becomes a liability at times.

The first goal was an example of David vs Goliath in terms of aerial threat as Ricky Lambert towered above the Brazilian full back to nod Southampton in to a surprise lead.

United gradually recovered and once again the second goal of the game came from the back post as Antonio Valencia’s ball found Van Persie due to Nathanial Clyne’s slip, the Dutchman made no mistakes with the finish, by emphatically rifling the ball with his left foot into the bottom corner.

Sir Alex stated in a post match interview that his centre back partnership of Ferdinand and Vidic needed more games. It was the first time they had started a game together since that fateful evening in Basel last December. In many periods of the game the lack of solidarity at the back was shown, especially when Morgan Schneiderlin pounced on poor positioning and a subsequent slip from Patrice Evra to head the Saints into a 2-1 lead.

United’s ball possession today could be a concern for future games against bigger opposition. United in most areas were frequently sloppy in possession. Once Scholes was brought on for Cleverley on the hour mark United’s tempo improved somewhat.

It wasn’t until the last five minutes when United really stepped up the gears and the breakthrough came after slack marking from the home side allowed Rio Ferdinand a free header that bounced off the post and subsequently land to the man of the moment, Van Persie, who tapped the ball home.

From that moment only one team were going to win if there was to be one last goal. In the second minute of injury time Nani whipped in a delightful corner and Van Persie adjusted his body and connect with a wonderful header that flashed past Davis into the far corner. Van Persie had gone from villain to hero inside the last 5 minutes at St Mary’s. This result could kick start United’s season as once again the back four had another wake up call by shipping two goals that nearly cost United the game. Nevertheless if he stays fit, with four goals in his first two starts as a red, RVP could well be United’s MVP in this campaign.