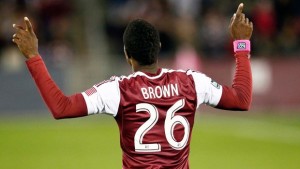 Not even the hardcore soccer fan would have believed what took place at Dick’s Sporting Goods Park on October 5th.

Seattle Sounders arrived in Colorado on a seven-game winning streak. Taking just a single point would have all but secured the Sounder’s place in the playoffs – it wasn’t to be though as the Rapids caused one of the biggest shock results this season, winning by a thumping five goals to one in front of a sell -out crowd (the first time Colorado have done so this season). Jamaican rookie Deshorn Brown netted the second fastest goal in MLS history in only 14 seconds to start what could only be considered as a complete demolition of one of the league’s best teams.

The match perfectly epitomized the common feeling towards Colorado at the moment, they have done surprisingly well. As it stands, Colorado sit fifth in the Western Conference standings, occupying the final playoff spot ahead of 2012 Supporters Shield winners San Jose and the underwhelming Vancouver Whitecaps. The Rapids are a long way ahead of what the critics predicted at the start of the season, with the resounding opinion being that fifth place was a long shot, one that would be unattainable with heavy emphasis and reliance that was to be placed on unproven, youth talent. The Manager, Colombian Oscar Pareja had set out a clear vision of how he wanted his side to play. An expansive 4-3-3 where ball retention was the priority. This vision was of complete contrast to that of previous head coach Gary Smith.

Colorado tend to get a lot less coverage than a number of the bigger market teams in MLS. Not only is it due to the generally low attendances they get (roughly 14,000 on average all time) but also the perception that suggests the Rapids are a team embedded in mediocrity, one who settles for a respectable regular season finish without too much concern on how far they progress in the playoffs. 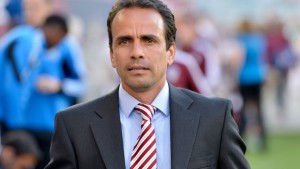 Ex- Arsenal scout Gary Smith changed that when his side lifted the MLS Cup in his second year of management in 2010. It was the first major trophy that Colorado had won in it’s entire history however, the Englishman declined a contract extension after a relatively disappointing 2011 season, ending with playoff exit in the conference semi-finals. Colorado were a different animal at that point – a very physical, direct unit with target-man Conor Casey, steely holding midfielder Pablo Mastroeni and defensive stalwart Drew Moor just a notable few who had key roles in the Rapids’ immensely successful 2010 season.

The playing style perhaps explained the reasoning behind why Gary Smith managed in the 2012/13 season at one of the football league’s most aggressive teams, Stevenage FC. It would be unfair to say that Gary Smith underwent the process of ‘winning ugly’. His player recruitment/scouting and man management was fantastic but the 2010 season was built with an element of luck, not an entirely sustainable way of playing in an evolving MLS where passing sides such as Real Salt Lake were emerging to the forefront.

Oscar Pareja struggled in 2012 after joining only a matter of weeks before the season began, instilling his philosophy proved difficult, slumping to a seventh place conference finish and a record of 11-19-4. 2013 has been a complete turnaround. Pareja initially removed veterans of the team elsewhere including Omar Cummings and Conor Casey, the league’s most deadly partnership in 2010. Hunter Freeman and Jeff Lorentowicz were also cast off. It was developing into a risky strategy with a heavy emphasis on youth. Dillon Powers and Deshorn Brown both joined through the draft system while the likes of pacey winger Atiba Harris and Houston outcast Nathan Sturgis were brought in to supplement the talent already at their disposal: Hendry Thomas, Martin Rivero, Drew Moor etc.

After a slow start to the season, Colorado have developed over the last seven months into an athletic, fluid side bustling with up and coming youth talent. A vast injection of quality in the Summer window has helped Colorado with their playoff push significantly. Uruguayan international winger Vicente Sanchez has already contributed one goal and four assists in just six games. Panamanian International and Gold Cup standout performer Gabriel Torres became Colorado’s first ever Designated Player and netted his first goal against Seattle on Saturday but has looked impressive in his few appearances. 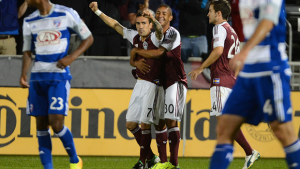 The whole first XI have performed admirably as well. Originally second keeper and success story (read here) Clint Irwin has done so well he is now the starting goalkeeper. Marvell Wynne looks far more comfortable in the right back role unlike last season at center back. Home grown player Shane O’Neill proved to one of USA’s most important components in the US U20 team that took part in the World Cup in Turkey in June. At left back first year rookie Chris Klute has notched sseven assists with calls for him already to be looked at closer by Jurgen Klinsmann for the USMNT. In midfield Hendry Thomas has been assertive in his commanding holding midfield role. Dillon Powers made it onto the ’24under24 list’, being a heavy creative influence with Martin Rivero being out for most of the season with injury and has now in fact replaced him permanently for the foreseeable future. Nathan Sturgis has improved dramatically alongside Thomas. The front three has been superb with Vicente Sanchez and Gabriel Torres already been mentioned but the standout player of the year has to be Deshorn Brown.

The sixth overall pick in the MLS SuperDraft playing at left wing has been able to combine his physical, athletic presence (standing tall at 6ft 2′) with his ever improving technical ability to become one of the league’s deadliest forwards. His two goals against Seattle proved a stark reminder of just how much potential the Jamaican has and how far he has progressed in only a matter of months where his finishing seemed questionable. His nine goals makes him the highest goal scorer for the rapids since 2010. Deshorn Brown looks to be a front-runner for the rookie of the year award.

Pareja is also staking his claim for manager for the year. He has converted a team whose lack of experience and lack of ‘star quality’ was deemed questionable into a solid, athletic and highly talented group whose form could well lead them deep into the MLS playoffs. Nobody expected Colorado to win the MLS Cup in 2010, whose to say they cannot cause another upset in 2013? They upset Seattle on Saturday evening, whose to say they are not capable of one of the biggest shocks yet?