The word “shambles” was recently used by Waterford United manager Roddy Collins to describe the state of the domestic game here in Ireland, and after last night’s pitch saga in the First Division game between Cabinteely and UCD, it’s hard to say otherwise.

The outspoken Collins was of course slapped with an extremely heavy handed ban of six matches and fined €1500 by the Football Association of Ireland for his comments in a national newspaper column.

However, with figures as high profile as Dundalk boss Stephen Kenny and Shamrock Rovers chief Pat Fenlon coming out in support of the controversial Collins, many would argue that the leagues governing body may be better served listened to men of such great experience within the league, rather than trying to silence them and turn a blind eye.

In the past fortnight or so, while the dust has began to settle on the unsavoury Collins saga, another has begun at the RSC in Waterford – long time chairman, John Sullivan, has left the club, who must find a reported €80,000 if they are to see out the 2016 season.

For those of you who may not be familiar with the layout of the First Division in which Waterford ply their trade, there are 28 games a season, with any attendance over 500 people seen as a major success in a league where you face the same seven opponents four times a season.

So for the FAI to effectively ban the Blues manager for roughly one-sixth of the season for simply stating his opinion in a reputable newspaper is nothing short of incredible.

While the fine handed down is unlikely to cause Roddy to lose sleep, the FAI would be far better served to focus on what they can do to help clubs like Waterford and bring more clubs into a division crying out for a new lease of life.

That point brings me to last night’s farcical situation involving the leagues newest members, Cabinteely. Before I say anymore, I wish to state my admiration for Cabinteely’s rise to senior football over the past year and a bit.

While results on the pitch may not be what the clubs hierarchy had hoped for, the professionalism shown off the pitch, particularly in the clubs social media and PR work should be looked at by long established League of Ireland clubs as something to aspire to and Cabinteely have rightfully been commended for that.

However, if the League of Ireland, even in its second tier, is ever to stride for professional standards, scenes like those witnessed in Stradbrook last night cannot be tolerated.

Cast your minds back to Cabo’s first ever game in the LOI last season at home to Wexford Youths and instantly images of a packed out ground and a grand show come to mind as does John McKeon’s famous winning goal in a 1-0 win over the eventual champions.

What many may have forgotten though was the post match criticism the Stradbrook pitch received with Youths striker Danny Furlong allegedly ending up with a slap on the wrist for this tweet and subsequent photo of the playing surface:

Result aside and congrats to Cabinteely they deserved it but this is an embarrassment to league of Ireland football. 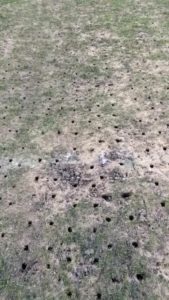 Sympathisers of the newly elected Dublin club claimed that due to the short-notice of Cabinteely’s arrival at Stradbrook that the pitch simply hadn’t had time to prepare for senior football and perhaps that was a fair assessment.

However, fast forward just over twelve months and once again we find ourselves in the disgraceful situation of LOI games been played on totally unfit surfaces. Taking to social media to air his views on last night’s situation was UCD player Thomas Boyle: 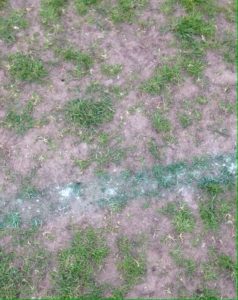 League of Ireland football often doesn’t get the credit it deserves in terms of the quality on show, particularity a team like UCD, who like to get the ball down and play good football and Collie O’Neill’s team rightfully gained great respect following their European efforts last season.

However, it’s no surprise to hear that last night’s First Division tie ended all square in front of just 250 people, with both sides forced to play direct football and even that proved difficult on the bumpy surface.

As we all know, League of Ireland clubs struggle to keep their heads above water as it is and the FAI are often slammed for some of the fines handed down to domestic clubs on a yearly basis.

However, if an experienced manager can receive a six game ban and a heavy fine for talking about situations similar to this, then surely the situation itself should bring consequences? Particularly when the issues regarding the quality of the surface at Stradbrook has been highlighted quite regularly in the past.

At the moment, there seems to be a total lack of consistency in regards to decision making with the League of Ireland.

Last season saw the hugely embarrassing postponement of Irish football’s biggest game, the Dublin derby between Bohemians and Shamrock Rovers, due to what was basically a loose piece of turf surrounding the Dalymount Park penalty spot.

You can’t seriously tell me the welfare of the Rovers and Bohs players that night was in any more jeopardy than the 22 that took to the field in Stradbrook on Saturday evening?

Due to the high profile nature of that postponement in Dalymount, the fall-out and reaction seemed to carry on for weeks. However, with last night’s events taking place away from the lights and TV cameras in the First Division, it is more than likely to be swept under the carpet and forgotten about.

This is exactly the kind of tin pot mentality that Roddy Collins was referring to and until change is made at the very top of Irish football why would we expect to be treated as anything other than second class sporting citizens?