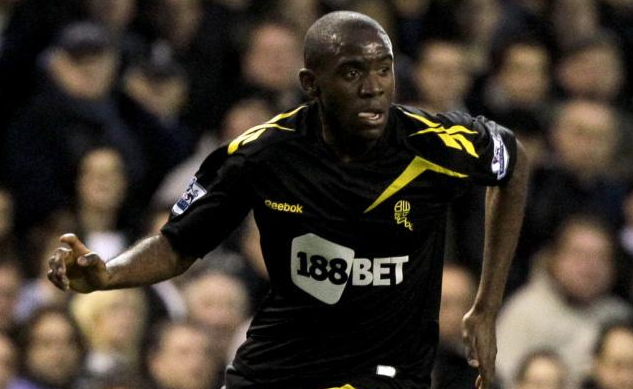 Bolton Wanderers midfielder Fabrice Muamba is fighting for his life after collapsing in the 41st minute of his team’s FA Cup game against Tottenham Hotspur.

The match was abandoned after club doctors and paramedics tried to revive the 23-year-old star for ten minutes while lying on the pitch at a sold out White Hart Lane of 36,000 fans.

Muamba joined Wanderers for £5 million in 2008 after stints with Arsenal and Birmingham City.

His manager, Owen Coyle, went to the hospital with the young player following his collapse and treatment at White Hart Lane and has now said that the next 24 hours are of critical importance.

Coyle said: “It’s very serious. There’s no getting away from that. God willing, he makes it through.”

“Fabrice is critically ill. The next 24 hours are going to be absolutely crucial.

“We’ve obviously been inundated with people wishing him well and we hope that if everybody can pray strongly tonight that Fabrice is able to recover.”

Ian Dennis, of BBC 5Live, said spectators could see that a defibrillator was being used on the footballer.

“When the medical staff arrived his face was on the turf,” he said.

“You could see them using a defibrillator and he was [electronically] charged on at least two occasions. Everyone could see Fabrice Muamba was fighting for his life.

“If he does pull through it will be down to the quick actions of the medics.”

He added: “You had a situation which was very eerie. Obviously everybody could see that Fabrice Muamba was fighting for his life out on the pitch. Supporters of both sides were chanting his name.”

A statement confirming the incident was later released on the club website.

Bolton Wanderers can confirm that Fabrice Muamba has been admitted to the Heart Attack Centre at the London Chest Hospital where he is currently in a critically ill condition in intensive care.

No further information will be issued at this stage.

The club has requested the media to respect his family’s privacy at this time.

Professional Footballers’ Association chief executive Gordon Taylor said it was a “terrible thing to see for all the football family”.

“This can happen on a pitch and [it is] one of the reasons why we insist all youngsters coming into the game have the ability to have heart screenings to avoid this happening,” he said.

Premier League Chief Executive Richard Scudamore added: “The thoughts of the Premier League, its clubs and players are with Fabrice Muamba, his family and Bolton Wanderers.

“We would like to praise the players, match officials, coaching staff and medical teams of both clubs at White Hart Lane for their swift actions in attending Fabrice.

“The League would also like to commend the compassion shown by the fans of Bolton Wanderers and Tottenham Hotspur.

“We hope to hear positive news about Fabrice who is and has been a wonderful ambassador for the English game.”

The incident will stun English soccer, it is the first such recorded incident at the highest level of the game since Clive Clarke suffered a cardiac arrest at half time during a match in 2007 whilst playing for Leicester City. Clarke made a full recovery but had to retire from professional football as a result. He has, since, become an important part of the charity CRY.

In 2003, Mark Vivian Foe collapsed and died on the pitch while playing for Cameroon in the Confederations Cup. The well liked midfielder was playing his club football for Manchester City at the time.

And over the last 10 years, the condition known as “Sudden Death Syndrome” has claimed the lives of professionals and amateurs alike.

There are many theories as to what causes the syndrome. Some experts feel that the players are being pushed to their limits as training techniques have evolved. Others feel that sports drinks have contributed also.

While many feel that players are now taking far too many supplements, and that their systems cannot handle the medication on top of the high intensity training.

A recent report on Sudden Death in Sport tells us;

A few people are at risk of serious arrhythmia or sudden death with exercise. The cause of death varies with the age of participants;congenital structural abnormalities occur in younger age groups and coronary artery disease in older age groups. Identifying such abnormalities makes prevention possible.

Sudden death in sport remains uncommon, with an incidence of two cases per 100,000 subject years. Five in 100,000 athletes have a condition that might predispose them to serious cardiac problems, and of those at risk 10 percent (one in 200,000) may die suddenly or unexpectedly.

In 2005, FIFA commissioned an investigation into sudden death within sport. The report found that because young people play sport, the sudden death of one so young, often gains more media attention. It also found that 93 percent of deaths in athletic sport are associated with Sudden Death Syndrome.

It went on to say that these deaths are in most probability caused by a “silent cardiac problem” that the person was unaware of.

Then in 2011 football’s governing body commissioned Colin Fuller of F-MARC (FIFA Medical Assessment and Research Centre) to come up with a risk management strategy to protect the health of footballers. There was no mention of making heart screening mandatory across the sport but it did recommend a flow chart to manage risk across the game.

There are several methods in preventing such tragedies, but the method used in Italy is the most favourable.

In 1971, the Italian Olympic Committee passed a decree that all professional sports athletes have to undergo a full medical every year. This was, however, mainly associated with health safeguards and making “doping” in sport a criminal offense.

They went on to do a study of over 33,000 athletes and found that professional athletes were twice as likely to suffer from cardiac arrest when compared to the normal populace. Most worrying, the average age of cardiac arrest death was calculated to just 23.

Hence the preventative nature of the yearly medical which should pick up on such matters.

Recognizing that they would have to screen in much greater numbers, in 1996 the American Heart Association assembled a panel of respected experts in the field of heart failure with the view of developing a strategy towards the effective screening of athletes.

However, unlike Italy, there is no legal precedent to carry out these examinations.

There is a similar system run by the FA in the UK where Academy players are health screened for heart defects because professional athletes are at an increased risk of cardiac stress. However, this screening then falls to the clubs as players get older.

The collapse of Fabrice Muamba is a sobering reminder of what is truly important in life and our thoughts and prayers go out to his family during this critical time.