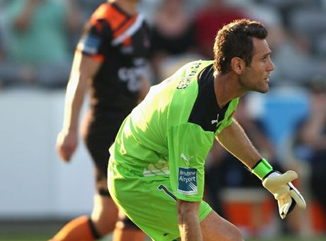 As the international break of football dominates this week, I will be focusing squarely on the A-League results heading into the final round before the finals. I was lucky enough to be on hand at the Brisbane Roar v Melbourne Heart match played at a Suncorp Stadium and bathed in glorious sunshine. It was magic weather until the heavens opened as if granted permission by the referee’s final whistle and giving the Roar and Heart faithful crowd a right drenching. Melbourne Heart keeper Andrew Redmayne will have recurring nightmares after a long-range Thomas Broich belter weaved, dipped, and curled like a heat seeking missile. Michael Theo’s grittiness and heroics continued at the back notching up his eighth clean sheet of the season. I’m certain that without him in the six yard box, Roar’s chances at a finals birth would be a mere pipedream.

Brisbane Roar returned to their possession hungry best and are in a good headspace for Thursday night’s battle with Sydney FC. Both teams are playing for a spot in the finals and anything less than a win will be seen as a massive disappointment given both teams rosters. I doubt this one will end in a clean sheet for with the likes of Broich, Berisha and Alessandro Del Piero all in good form.

Well don’t you just love a Derby? Parramatta Stadium hosted its second of the season in front of almost 20,000 Red and Blue fans. I am a huge fan of football so getting to sit down with a glass of wine and soak up the atmosphere in my living room was special. The Derby concept is special in football and I do miss that the Brisbane Roar doesn’t have a rivalry outlet for their loyal fans. Hopefully in coming seasons they can introduce another side in South East Queensland. Sadly the Gold Coast franchise failed where the Western Sydney Wanderers model continues to gain an unprecedented following.

The only other clean sheet news occurred in the Central Coast Mariners away game to Adelaide United. It was rare opportunity for reserve keepers Paul Izzo (Adelaide) and Justin Pasfield (Mariners) to showcase their wares after spending much of the season warming those flimsy white Bunnings Warehouse seats. Pasfield won the battle on the day and given the possible exit of Matt Ryan to the green pastures of Europe next season, the goalkeeping succession plan at Gosford is well and truly bedded down. Paul Izzo gained some valuable game time as his mentor and captain Eugene Galekovic joined the Socceroos camp in Sydney with Matt Ryan and Mark Schwarzer.

There is always plenty of expectation surrounding the Socceroos progression to a World Cup, and heading into their home game against Oman a win would have provided a huge boost of confidence ahead of the remaining qualifiers. Their plans however have been derailed after a disappointing opening 50 mins that saw the home side two nil down and Mark Schwarzer on the end of an unfortunate Mile Jedinak own goal. Schwarzer can be excused for the first goal after a cleverly weaved nutmeg strike by Oman’s Abdulaziz Al-Miqbali found the net in the sixth minute and put the Socceroos heavily on the back foot. Again it was left to stalwarts Tim Cahill and Brett Holman to help snatch a draw that leaves the Aussies with plenty of work to do ahead of the remaining fixtures against Japan, Jordon and Iraq.

As the analysis and criticism facing the team and manager eventually subsides, I’d like to highlight the form of our goalkeepers, which has never been better. Schwarzer has been at his brilliant best for Fulham, Galekovic is a genuine spot kick specialist, while Mat Ryan continues to head up the clean sheet tally in the A-League with 10 already this season.  So when it gets to the pointy end of qualifying, rest assured the lads at the back will do their job and continue to make those boys up front look good.

One of the best from Gordon Strachan

Reporter: Gordon, can we have a quick word please?