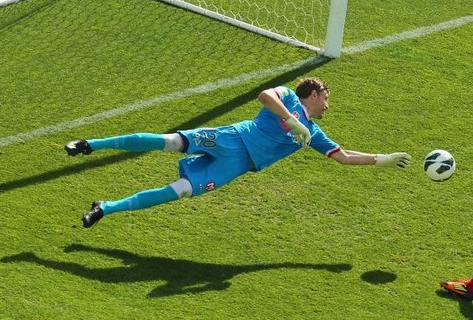 We start this week looking at the A-League results and in particular the men in gloves. Young Andrew Redmayne recorded his first clean sheet for Melbourne Heart as they had a moral boosting win over second placed Adelaide United at AAMI Park.  The clean sheet came at the expense of Clint Bolton’s recent demotion to the bench, but Redmayne with Bolton’s support has stepped up to the plate and is taking his chance in the starting side. The win helped Heart move into the top six for now, but they now meet the consistent Western Sydney Wanderers at Parramatta Stadium this Saturday night. Another healthy crowd will be on hand to boost the Wanderers’ chances of another victory over the Melbourne side. In a terrific initiative by the new franchise, all children will be admitted free to this weekend’s clash.

I attended the Brisbane Roar/WSW game at a humid Suncorp Stadium and saw an impressive outfit that showed they now capable of coming from behind to clutch a game. Brisbane dominated possession for the entire match and looked the victors at the break. Tony Popovic’s men continued to move the ball forward to open up the holes in the Roar’s defence and eventually saw them score through Mark Bridge via a clever Jerome Polenz assist.  Michael Theo was left all at sea with the next strike after the crowd voiced their displeasure to officials over their failure to blow the whistle for offside that eventually led to a clean finish from Youssof Hersi. On replay it was the correct call, as Shinji Ono played no part in the play. For the Roar it’s obvious that all is not happy in paradise with Besart Berisha’s antics testing the patience of many in the playing group. At one stage during the match Berisha found Thomas Broich on the right hand side of the park and pushed a miss-timed through ball only to find it intercepted by an attentive Wanderers’ midfield. It wasn’t Broich voicing his disapproval of poor service by the striker and Berisha’s childish waving and cursing in Broich’s direction did little to quell the speculation of player disunity on and off the pitch. Time will tell if management will tolerate Berisha continuing his regular “I’m taking my bat and ball and going home” antics or perhaps another club beckons.

Elsewhere and Melbourne Victory flew home from the west in high spirits after getting the three points, albeit from an unfortunate own goal by the Glory defender Scott Jamieson. Nathan Coe picked up his fourth clean sheet of the season and has all but cemented his position as the number one keeper at the club.  The Victory are now firming as a real player in the race for finals after their shaky beginnings to the season.  The real highlight in keeping terms was the match between Central Coast and Newcastle Jets. In a display that would put a wry smile on any keeper worldwide, both sides failed to find the back of the net. Matt Ryan continued on his clean sheet winning ways with some very clinical saves whilst Mark Birighitti also impressed by snaring his third clean sheet in as many matches.

Back in the Harbour City and Wellington’s Mark Paston had an afternoon he would rather forget as they went down 7-1 to Sydney FC at Allianz Stadium. Paston had a busy time fishing the ball from the net after Alessandro Del Perio put on a football master class that gave their fans some hope of a top six birth.

A brief look at the EPL fixtures over the weekend with Manchester City’s Joe Hart again adding another to his tally of clean sheets to lead the League stats sheet with an unbeaten 10. Liverpool’s Pepe Reina, currently recovering from a thigh injury and broken nose suffered in the Manchester United game enabled Brad Jones to join in the thumping of Norwich and record his second clean sheet from five games played this season. Jones is likely play in Liverpool’s 4th round tie against Oldham on Sunday where it will be an all-Aussie keeper affair with young Dean Bouzanis starting for Oldham Athletic.

The only other clean sheet recorded was in the Southampton v Everton scoreless draw at St. Mary’s Stadium. Surprisingly it was only Tim Howard’s fourth of the season for his fifth placed Everton side, after playing in every league fixture to date. His ability to save the Toffees from defeat in matches is evident from their 11 draws for the season, equalling Stoke City’s heroics.

This weekend sees some delectable fixtures with relegation poised sides Aston Villa and Newcastle meeting at Villa Park. Hard to say whether Villa will be without manager Paul Lambert after their disappointing exit in the Capital One League Cup earlier this morning. The other game that could be a potential banana skin for Chelsea is their match against Reading. Reading totally outclassed Newcastle at St James’ Park and will be brimming with confidence. Chelsea will be backing up from a League Cup Semi-final at Swansea and a FA Cup away fixture to League One hopefuls Brentford, so Rafa Benitez may need to shuffle his talent riddled bench about for this one.

Best of luck in tipping the results might be wise to pick a few draws this week.

Football Quote of the Week:

I like Balotelli: he’s even crazier than me. He can score a winner, then set fire to the hotel.